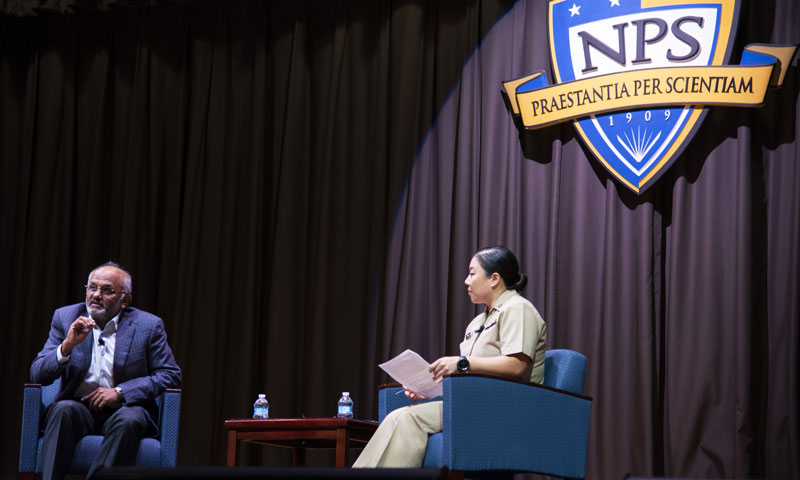 Narayen shared his knowledge and insight into running a major tech company to the assembled students and faculty, as well as his perspective on the characteristics of effective leadership.

One of the major goals of the SGL series is to provide students with insights on relevant topics of defense and security relevance. At Adobe, Narayen says, an understanding of analytics has empowered the company, and it can do the same for the DOD. In defense applications, how you harness the power of the information that you have and put it to use is critical, Narayen said.

“We have analytic software that allows us to evaluate when data is being looked at and if there’s an anomaly associated with its usage. In each of the domains of software, thinking about how artificial intelligence and machine learning can be used to process data, that’s important to make critical decisions in milliseconds,” he said.

Even though they’re a global leader in tech, Narayen admits Adobe is sometimes perceived as the company that created PDFs, and some software to manipulate pictures. But, he quickly says, the company figured out some time ago that if you enable people to innovate, you’re going to have a lot of influence on their success.

“If you think about PDFs and Flash, we are on more computers and mobile devices than virtually any other piece of software in the world,” said Narayen.

“At Adobe, we have a fundamental philosophical hypothesis that great ideas come from everywhere,” he continued. When you are trying to “build a lasting technology company,” if you can build a platform in which others can innovate, you can reap the benefits of the “entire ecosystem of partners that are building on top of it,” he said.

Although the company is in a significant growth period, Adobe has had its share of adversity, Narayen said. Coming out of a recession, the company’s revenues had slowed significantly, and they had to improvise, adapt and overcome in order to survive.

“When you have your back against the wall, it’s almost easier to change,” said Narayen. “We decided that we had to be the first company on the planet to move our desktop software to the cloud. I learned something as part of that process ... Preserving the status quo in technology is never an option.”

This movement positioned the company to return to several years of growth, and has led Adobe to becoming one of the most tech-savvy players on the Silicon Valley playground.

Looking ahead, Narayen says Adobe is currently working on ground breaking technology that has the potential to revolutionize image analysis, allowing one to search millions of images that have no data whatsoever with just one word.

“You can get tens of millions of pictures that have never been tagged, and you can apply our algorithms to those images and do a search,” said Narayen. “This technology is amazing as it relates to the medical field ... the field of radiology [for example] is going to completely change.”

Narayen closed his presentation to the campus community with a discussion on partnerships, which he sees as critical to improving the services they provide to customers. Adobe, he says, is leaning forward on bringing external players into their research environment, to bring new problems – and new possible solutions – to the company.

“We have this fundamental belief that we don’t have a monopoly on all the good ideas,” he said. “There are great ideas that exist, and we are all ears for the things that we may not have even thought of.”

NPS’ longstanding Secretary of the Navy Guest Lecture program provides a series of professional lectures by senior leaders throughout defense, government, industry and academia designed to help the university's students and faculty link their studies, teaching and research to the defense needs of the nation. Narayen’s SGL represented the university’s partnership with the NPS Foundation speaker’s initiative, designed to enrich the university’s SGL program through unique engagements with highly-respected national, and international, leaders.