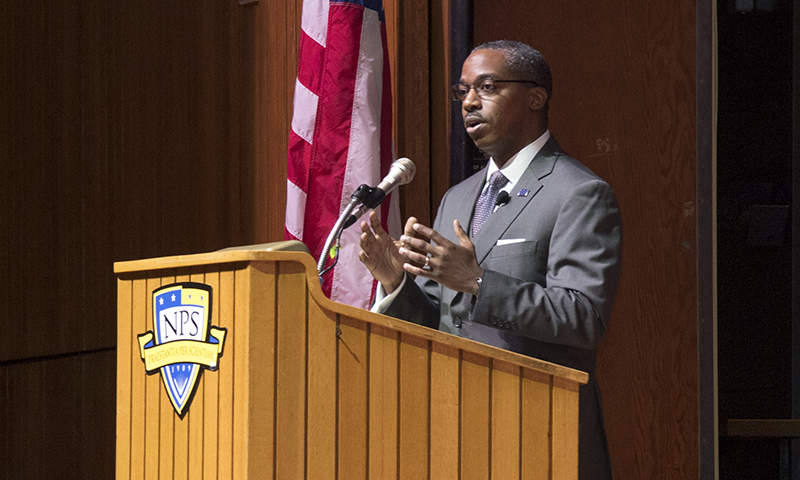 Dean of the Elliot School of International Affairs at George Washington University and former Ambassador to the African Union Ambassador Reuben Brigety II spoke to NPS students, faculty and staff during the latest Secretary of the Navy Guest Lecture (SGL) in King Auditorium, Nov. 21. Brigety stressed the importance of responsibility during his address to the students, highlighting the changing leadership role of the United States in the broader world.

“Let me begin this by congratulating all of you for being selected to study at the Naval Postgraduate School,” Brigety said. “I am well acquainted with the enormous reputation of this institution and frankly what it means to be selected to study here.

Brigety described the importance of self-reflection, of learning from others and from history. He encouraged the students to take advantage of this “tremendous gift to stop and think; to stop and question, and to stop and learn from each other,” he said.

“One of the things you learn about from reading about the historical careers of great military leaders – Patton, Nimitz, Eisenhower, MacArthur – is that amongst the most important things that happened to them, that prepared them for the enormous challenges that history thrust upon them ... happened at times when they either had time to take off to study or … they took the time to take advantage of pause, to question, to understand both the significance of their profession and the significance of where they thought the world was moving,” Brigety explained.

The former Ambassador continued his discussion by turning his focus to the political climate of the United States, and its impact on foreign affairs.

“It is a reasonable assertion to suggest that our country, the United States, with respect to all of those here who are studying abroad from other countries, is experiencing its most polarizing moment, at least since Vietnam if not arguably for 100 years,” Brigety said.

“The nature of our changing demographics, the nature of an increasingly polarized media environment, the nature of political gerrymandering and what that does to incentives or disincentives for political competition, etc.,” continued. “My focus as a foreign affairs specialist is what that polarization is going to do to the United States’ engagement in the world and our ability to lead.”

Brigety was appointed Representative of the United States of America to the African Union and Permanent Representative of the United States to the UN Economic Commission for Africa in Sept. 2013. Prior to this appointment, Brigety served as Deputy Assistant Secretary of State in the Bureau of African Affairs, with responsibility for southern Africa and regional security affairs.

In closing his discussion, and true to his academic nature, Brigety offered the students a topic for further study.

“Let me offer you a thesis,” he said. “That thesis is that there is something very different between American nationalism and American leadership. Leadership by definition in any circumstance … is the ability to convince other people that your interests are their interests. And that they should take significant steps to be able to advance your shared interests together for your mutual benefit.

“Nationalism is not the same thing,” Brigety continued. “Often times, there has been the confusion of mistaking American leadership for American nationalism. I would go a step further to say that often times the nature of American engagement in the world is framed as somehow a division between ...  American isolationism or American hyper-engagement.

“The real question is whether or not the United States is just like any other state, simply trying to advance its own interests,” he noted. Critical to this question, he stressed, is “whether or not we find a way to ensure that our interests are seen as shared interests with other parts of the world, so that other countries will take significant steps in advancing our interests, together.”

NPS’ Secretary of the Navy Guest Lecture program provides a series of professional lectures by senior leaders throughout defense, government, industry and academia designed to help the university’s students and faculty link their studies, teaching and research efforts to the defense needs of the nation.