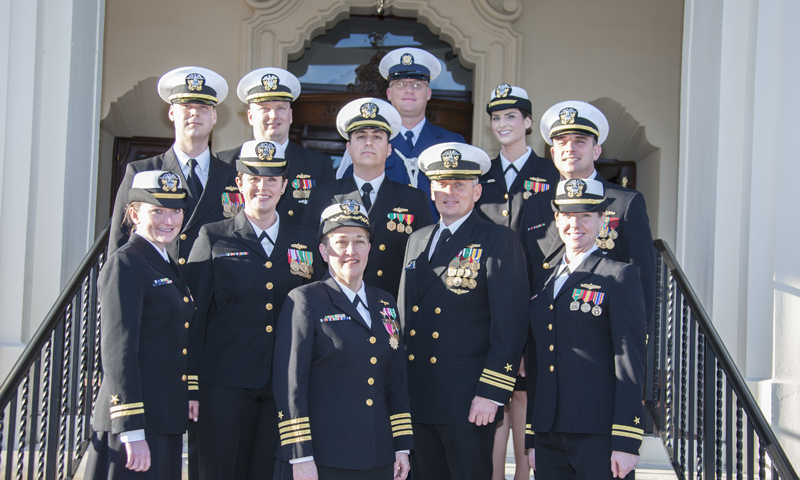 Now retired Navy Capt. Rebecca Stone poses for a group photo with several of her students following a retirement ceremony in her honor on the Quarterdeck in Herrmann Hall, Jan. 15. Stone's 30-year naval career was capped by six years at NPS as an Associate Dean for the Graduate School of Engineering and Applied Sciences, and as a military professor in the Department of Oceanography.

"One of my favorite and best things that I did during my teaching career at NPS was make contact with so many officers in the METOC [meteorology/oceanography] community, and help to prepare them for applying their science to Naval operations," said Stone.

"Rebecca has been a great friend and advisor to me and many others; she helped me immensely," said McLay. "Her never quit spirit was a source of encouragement and positive energy for all of the NPS team."

"Stone was awarded the Legion of Merit during her retirement ceremony, with the accompanying citation, signed by Director, Navy Staff Vice Adm. Scott H. Swift, a testament to the influence she's had on the university and its students."

"[Stone's] dedicated efforts in the classroom and administration have had an immeasurable impact on her students, the meteorological and oceanographic programs, and contributed to unprecedented levels of mission success at the Navy's premier graduate research university," the citation read.

Stone taught hundreds of students in her 24 meteorology and oceanography courses over the years. She also served on six dissertation committees and as a co-advisor on numerous masters' theses. She intends to stay in the Monterey area where she hopes to further her work with Navy atmospheric and oceanographic models, and to continue playing music.