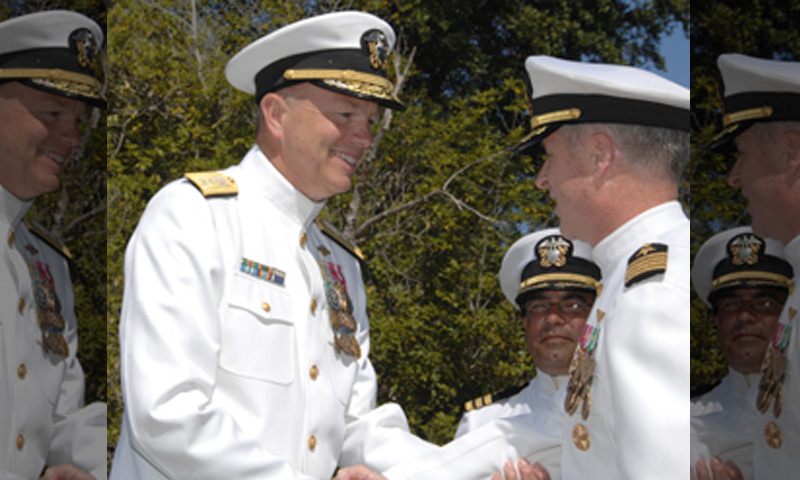 The new Naval Support Activity Monterey (NSAM) command was established during a ceremony, Sept. 30, at its new headquarters. The new command replaces the old Naval Support Detachment established in 2003 to support the Monterey military community.

“I am looking forward to serving with Team Monterey, to being part of the synergy between the base and the tenants and the community here,” said Naval Support Activity Monterey Commanding Officer (CO), Navy Capt. Gerral David, who assumed command during the ceremony to become NSAM’s first CO. “I have one agenda and that is to make this place better. We will participate and we will join and we will belong in as many ways as we can. It is our honor and our privilege to serve our nation at this place and at this time. We’re looking forward to meeting and working with each and every one of you.”

According to the NSAM’s mission statement the command will be a multifunctional organization dedicated to providing responsive high-quality base operational support to enable tenants to accomplish their mission, enhancing their quality of life and to be a responsive civic partner by building and nurturing effective relationships with the local communities.

“Today is the culmination of many years of work that will improve efficiency and allow all the commands here in Monterey to focus on their important work and not on the management of installation functions,” said official guest speaker Rear Admiral William D. French, Commander Navy Region Southwest. “The transition from a Naval Support Detachment to a Naval Support Activity is greater than just a simple name change. The new organization will streamline operations to better support NPS, the Naval Research Laboratory, Fleet Numerical, and more than 10 other commands located here in Monterey.”

He said the command would eliminate redundancy and provide a more efficient and responsive organization for the training of naval officers and the support of Sailors, DoD civilians and their families.

“NSAM will continue the tradition of providing superior facilities and service to its tenants enabling our tenant commands to focus their efforts on what they do best,” said French.

The Naval Postgraduate School, for example, will focus on what it has come to be known for, he added … the largest producer of advanced degrees for the DoD, and a flagship institution with recognition around the globe.

Naval Support Detachment was established in 2003 to align with the Commander Naval Installations Command’s newly created Regional Shore Installation Construction, said French. NSDM was part of Navy Region Southwest for six years and under the direction of Pete Dausen, NSDM Executive Director for Facilities and Space – his team executed more than $100 million in major projects for their tenants. They supported the construction of more than 160 buildings on 626 acres and over 3,500 military and civilian personnel in the Monterey Bay area.

In particular, French pointed out, the significant improvements in quality of life such as the newly renovated El Prado Cafeteria, the expanded child care center, and La Mesa Housing are tangible examples of the improvements that have been made.

“Today marks the visible shift of responsibility from a detachment to an activity,” said French. “More will be expected and more will be delivered.”