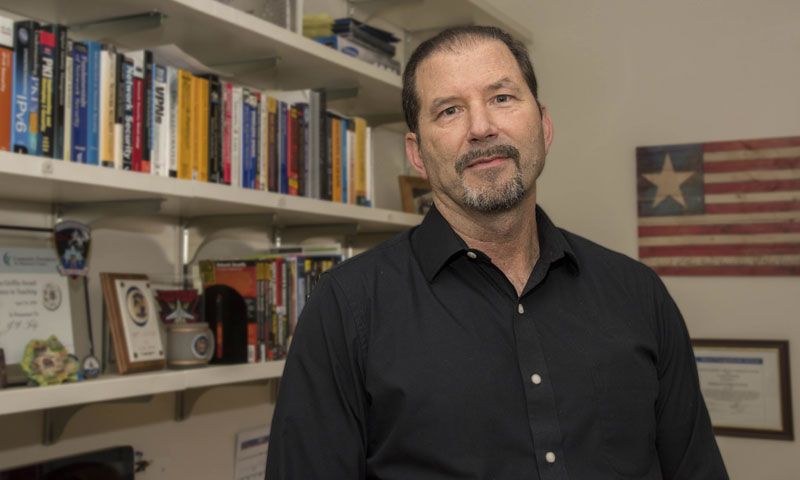 Naval Postgraduate School (NPS) Department of Computer Science Senior Lecturer John D. Fulp will receive, for the second time, the Rear Admiral John Jay Schieffelin Award for Teaching Excellence. An NPS alumnus himself and Marine Corps veteran, Fulp says he is proud to be at his alma mater, and to the serve of the DOD as a teacher at NPS.

“It was an honor to receive the award the first time in 2007, but this second award is all the more special as I am the first to receive it twice,” said Fulp. “Even though such awards are not expected, it is reaffirming to know that my courses have been so well received by the students.”

Fulp has taught several subjects at NPS since 2001, including network security, cyber security incident response and recovery, and computer organization and architecture to name a few. In his 18 years at NPS, following four years as an instructor of computer science at the U.S. Naval Academy, Fulp says he has seen an evolution in the curriculum that mirrors rapidly evolving threats and technologies within the discipline.

“Change has been particularly noticeable in the computer science department given the rapid adoption of automated information systems in the DOD,” said Fulp. “As a result, our department has had to not only add additional courses of specialization, but also update existing courseware at an increasing pace. Some of our course topics are so relatively new that many of the professors teaching the topics have never even had the courses themselves. It is both a challenging and exciting discipline to work in.”

Sponsored by the NPS Foundation, the annual Schieffelin Award recipient is determined by ballot information supplied by current students and recent alumni, along with a performance history processed through a series of objective computer programs which eliminate bias and award merit rankings to eligible candidates. The Schieffelin Award committee, comprised of appointed faculty members, evaluates the results of the balloting and selects a final winner.

The award will be officially presented to Fulp at the Spring Quarter Awards Ceremony on June 4 on the NPS Quarterdeck in Herrmann Hall.