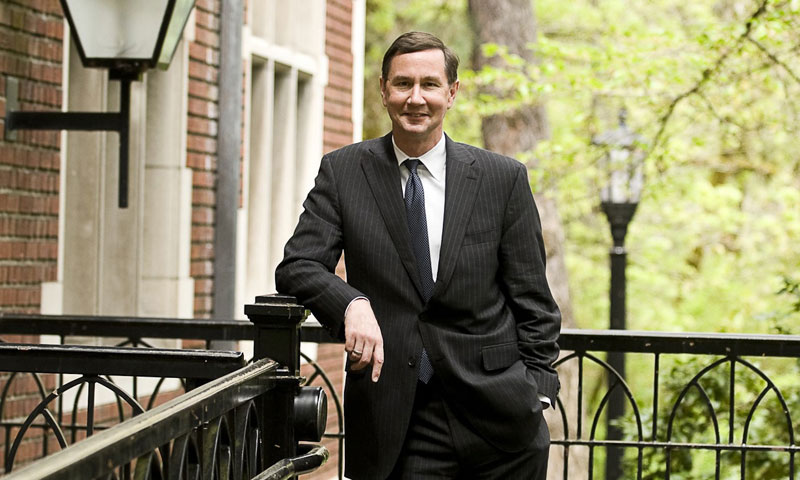 A portrait of John R. Kroger, the Department of the Navy's first-ever Chief Learning Officer (CLO). The CLO position was created to unify all Navy and Marine Corps formal education programs and will be responsible for implementing education changes as directed by the Secretary of the Navy.

WASHINGTON (NNS) -- Secretary of the Navy Richard V. Spencer on Sept. 10 announced John R. Kroger as the Department of the Navy’s first-ever chief learning officer (CLO), who will lead and unify all Navy and Marine Corps formal education programs.

Kroger comes to the Department from Harvard University, where he served as a visiting professor at Harvard Law School and leader in residence at the Kennedy School of Government. He was president of Reed College in Portland, Oregon, from 2012 to 2018. He previously served as attorney general for the State of Oregon and as a federal prosecutor.

As the secretary of the Navy's staff assistant for naval education, Kroger will be responsible for implementing sweeping educational changes, directed by Spencer earlier this year, to better prepare the Navy and Marine Corps for a new era of great power competition and massive technological change. This was one of the key recommendations of the Education for Seapower (E4S) study completed late last year, chaired by Under Secretary of the Navy Thomas B. Modly, the first such review of naval education in more than 100 years.

As the leader of naval education, Kroger will align the efforts of the Department’s academic institutions to improve officers' critical and strategic thinking. Those institutions include the United States Naval Academy, Naval War College, Marine Corps University and the Naval Postgraduate School.

“I am convinced now more than ever that the intellectual development of our naval personnel is the most critical warfighting capability for our national security,” Spencer said. “Failure to adapt to all aspects of how we prepare our naval leaders for the future creates an unacceptable risk for American citizens, who have long relied on the Navy and Marine Corps to be at the intellectual forefront of national-security concerns.”

Kroger will also be charged with implementing education reforms such as the establishment of a Naval Community College (NCC) for enlisted personnel. The forthcoming blue-green institution of higher learning will be a fully accredited online system allowing Marines and Sailors to earn an associate’s degree while on active duty and to transfer their credits to bachelor’s degree programs at civilian universities.

“Bringing in a CLO is one of our first steps in investing in our people and preparing them to not only know what to think, but how to think, as it relates to the current and future threat environment,” Modly said. “Investing in their education in the naval profession is our institutional and their personal responsibility. Future threats will be fast and unpredictable. We need people at all ranks and levels that can think through the problems we’ll face.”

Kroger served as an enlisted Marine from 1983 to 1986. He received his bachelor’s and master’s degrees from Yale and his law degree from Harvard.

For more on this story, please visit navy.mil.