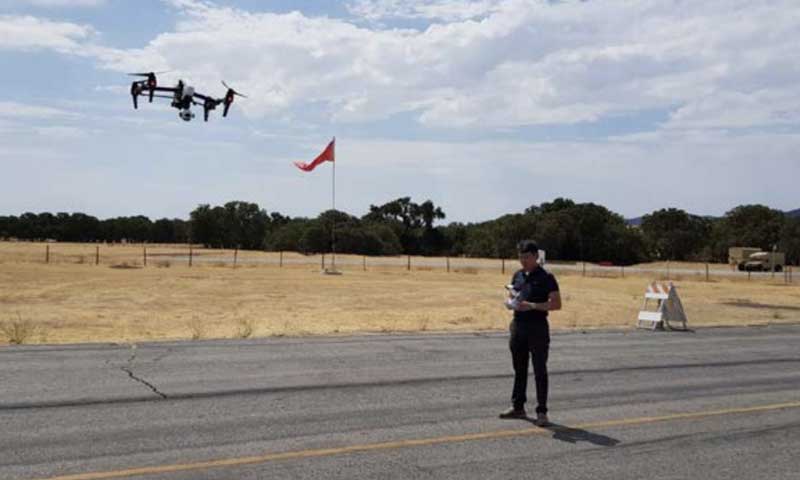 “[If approved,] it will allow people to save resources for conducting these types of operations and do the thorough sweeps more often,” commented Yakimenko, pointing out that a class B runway sweep only requires approximately 10 minutes. “Eventually, such a system would reduce the probability of having a major FOD-induced disaster, which the aviation world has witnessed in the past.”

Yakimenko’s theoretical study followed by the field test experiments flying over a real runway and eventually developing a prototype of the system featuring a multi-page functional graphical user interface (GUI) with a database including several airports of different classes, and multiple representative drones bearing representative electro-optical cameras. The GUI was developed to meet the requirements and expectations of real air traffic controllers and ground teams.

“We wrote the first theoretical paper on how multi-rotor drones could be used on practice more than a decade ago,” recalled Yakimenko. “There were no commercially-available drones back then. Shortly after, the multi-rotor drone boom started, resulting in drones with quite powerful and reliable sensors available at a relatively low price.”

In recent years, the level of technology has improved while costs have reduced, so that relatively high-end consumer-grade sUAS has now become affordable to the public. According a feasibility assessment paper on the subject, such developments present opportunities for airports to tap on the potential of sUAS to reduce the manpower needs. In fact, the areas in which sUAS could be employed in airport operations are numerous. The FAA Small UAS Rules introduced in 2016 also opened the door allowing other national aviation authorities to follow the lead and manage sUAS operations in their local airspace minimizing the operational risks

“While there is always a theoretical interest to increase the autonomy of such drones to be able to handle environmental and mission complexity and human independence simultaneously, the Autonomous Systems Engineering and Integration Lab in the NPS Systems Engineering department is concentrating on involving students into a conceptual mission design and proof of concept experimentation where a simpler but more focused task could be addressed and fully explored within several months, a master’s thesis time frame,” said Yakimenko.

While the process from concept to patent filing can take several months to a few years, Yakimenko noted that actually getting awarded the patent, if at all, can take much longer.

“I’m very glad that this idea and concept has already attracted some attention,” he said.

This patent marks the 16th patent application for Yakimenko, with 11 awarded and five still pending, since he began working at NPS in 1998. He was named a Distinguished Professor in 2019.