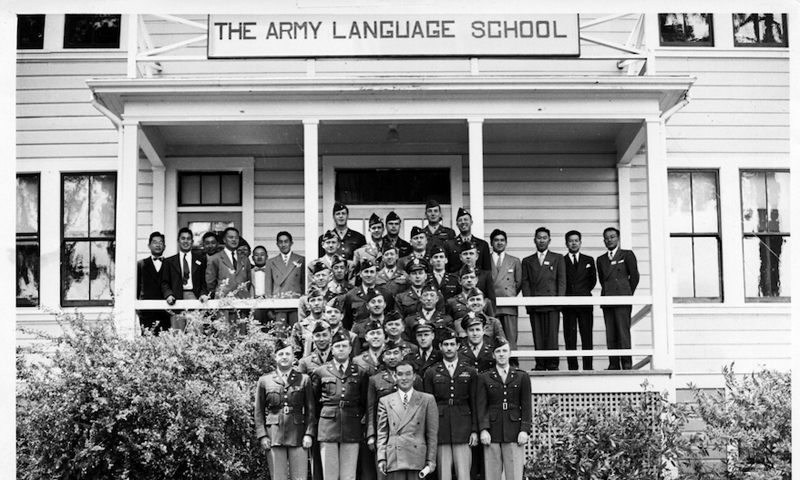 A class of future linguists is pictured during the early years of the nearby Army Language School, now the Defense Language Institute Foreign Language Center (DLIFLC), which celebrates its 75th anniversary this week with a series of events on the Monterey campus.

Over those years, NPS and DLIFLC have found many ways to collaborate beyond the sharing the essential family support services.

"DLI and NPS have a special relationship," said Navy Capt. Erik Stohlmann, Military Associate Dean of the School of International Graduate Studies (SIGS). "The School of International Graduate Studies specifically has a close bond with DLI … the language training that occurs at the Presidio complements several of our curricula that we have here at NPS."

In addition to some of the academic advantages, NPS and DLIFLC have discovered opportunities to collaborate that have served as a model across DOD. In an era of decreasing budgets and limited resources, and a persistent mandate to realize efficiencies wherever and whenever possible, NPS and DLIFLC developed an innovative model for sharing information technology resources in 2011 that remains in effect today.

"DLIFLC maintains their data center within NPS' data center," said NPS Deputy Chief Information Officer for Operations, Chris Gaucher. "Since its creation in 2011, the DLIFLC and NPS .EDU network provides each institution with the ability to connect to the world at speeds hundreds of times faster than most current U.S. government networks allow. This [partnership] provides each organization's faculty, staff and students with the ability to access resources quickly, saving class and study time while providing researchers with the results they need to quickly modify their analytical techniques appropriately."

Stohlmann, who is himself a two-time DLIFLC alumnus, added that both institutions share another trait in common, for they are both jewels in the DOD's crown of education institutions, especially in today's joint service environment.

"DLI is a fantastic command! There's no one who can produce such high-quality linguists in such a short amount of time for the cost," said Stohlmann.

For more information on the DLIFLC 75th anniversary, check out http://www.dliflc.edu.