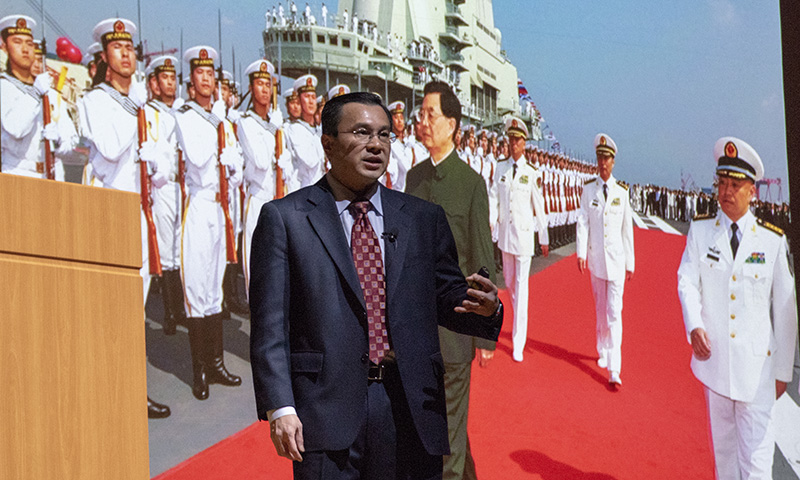 Naval Postgraduate School (NPS) students, faculty and staff received an analytical look into the developments of Chinese sea power from Dr. Toshi Yoshihara, Senior Fellow at the Center for Strategic and Budgetary Assessments (CSBA), during the latest Secretary of the Navy Guest Lecture (SGL) in King Auditorium, Feb. 26.

Before joining CSBA, Yoshihara held the John A. van Beuren Chair of Asia-Pacific Studies at the U.S. Naval War College where he taught strategy for more than a decade. He was also an affiliate member of the college’s China Maritime Studies Institute. Yoshihara is co-author of “Red Star over the Pacific: China's Rise and the Challenge to U.S. Maritime Strategy,” which has been listed on the Chief of Naval Operations Professional Reading Program since 2012. The second edition was published in 2019.

“My argument this afternoon is fairly straightforward,” said Yoshihara. “China’s turn to the seas will be a permanent and complicating factor in East Asian politics, and to U.S. maritime strategy for years, if not decades to come.”

Yoshihara explained how the Chinese use the term “maritime consciousness,” meaning a broad understanding of sea power within society, to describe a whole-of-nation approach to sea power. To illustrate China’s recent interest in forming a maritime consciousness, he presented social media posts of Chinese citizens celebrating the launch of a fighter jet off the Liaoning, China’s first aircraft carrier.

“These images attempt to sculpt a new maritime consciousness to condition its citizens to understand sea power as a critical implement in China’s national power,” said Yoshihara. “This highlights the intersection of Chinese society and Chinese strategy. Even for an authoritarian regime like China, the Chinese Communist Party needs to gain the consent of the governed because navies cost a lot of money and require long periods of sustained resources to build.”

Yoshihara said obtaining wealth and power through seaborne commerce is part of the Chinese dream. He described China’s sea power as a three-pronged and connected approach. One prong represents the production of goods and services, while the other prongs are shipping and overseas markets connected by China’s port system.

“The Chinese port system is in many ways the connective tissue,” said Yoshihara. “A proxy measure of how well China is doing is how much its industry produces goods, the volume of goods the ports handle to put goods on ships, and the sending of those goods on ships to foreign markets. Of the top 20 ports in the world, China’s ports occupy much of the top 10 and the top two ports are Chinese. That is a pretty good measure of China's rise as a sea power.

“Increasingly, China needs to build the capabilities that enable China to extend a defensive perimeter,” continued Yoshihara. “That means power projection. That means sea power. You can see that the economic transformation of China has also changed China's national security priorities.”

Yoshihara referred to a map of the western Pacific and pointed out several island chains that China views as barriers to its maritime ambitions.

“The Chinese have historical evidence for thinking in this way. They go back to the early years of the Cold War when the United States established a series of bases on the island chains to radiate American military power along the eastern seaboard of Eurasia to contain the Soviet Union and communist China,” he said. “When the Chinese look out into the western Pacific, what they see are concentric rings of American military power that stretches from the American homeland right into China's backyard.”

Yoshihara showed how maritime powers could use the chokepoints formed by the island chains to cut off China’s access to the seas during war and crisis, thus giving China a claustrophobic world view about the maritime domain. Quoting several of China’s past military leaders, Yoshihara stated that China is obsessed about keeping their economic routes open.

“Many of the navy’s missions have very little to do with actual fighting at sea,” said Yoshihara. He further explained that China uses naval diplomacy to show the flag and to protect economic and diplomatic interests. Even in a wartime scenario, Yoshihara pointed out that one of the key missions of the Chinese Navy is to defend the nation’s sea lanes to protect China's seaborne commerce.

In concluding his presentation, Yoshihara summed up his assessment of Chinese sea power by noting that the nation’s capabilities are finally catching up to its longstanding ambitions to protect its interests at sea. He noted that if the United States is to understand the emerging great power competition with China, then we must understand Chinese sea power in this grand strategic context if we are to compete effectively.