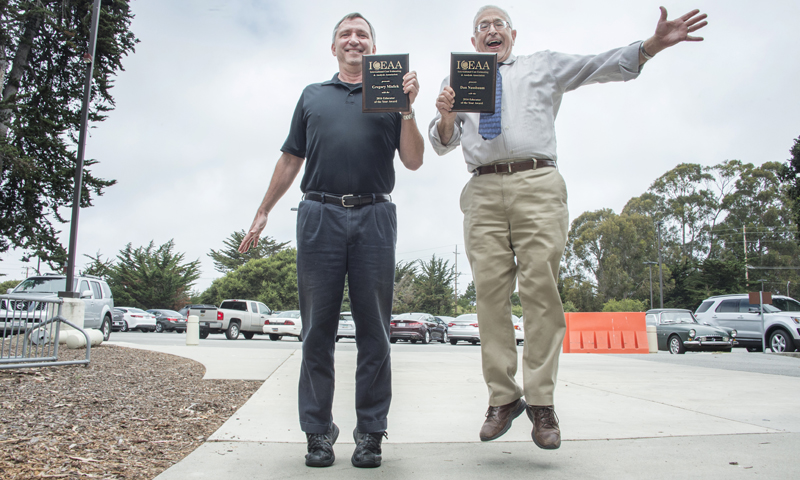 NPS Department of Operations Research Visiting Professor Daniel A. Nussbaum and Senior Lecturer Gregory K. Mislick hold the International Cost Estimating and Analysis Association (ICEAA) 2016 Educator of the Year Award. The two earned the distinction as a team for their collective contributions to the cost estimating profession throughout 2015, and were recognized during the recent 2016 ICEAA Professional Development Workshop held in Atlanta, Georgia, June 7-10.

"I'm honored and humbled that we were both selected for the award, and we join those who in the past have made significant contributions to the art and science of cost estimating, especially in the current economic environment," said Nussabaum.

Nussbaum and Mislick are co-program managers for NPS' Master of Cost Estimating and Analysis (MCEA) program. In 2015, they co-authored a textbook entitled, "Cost Estimation: Methods and Tools." Nussbaum is also chair for NPS' Energy Academic Group, while Mislick has served as Chair for Cost Analysis in the Operations Research department since 2006.

"What the Educators of the Year Award means to me is that we bring attention to really how relevant cost estimating and analysis is to decision making, not only for the Navy but also in the national arena," said Mislick, recalling remarks from Winter graduation keynote Rear Adm. David Lewis. "[His] challenge to the graduating class during NPS' Winter quarter keynote highlighted cost estimating, saying 'It's up to you to revolutionize how we do business and be the ones who find the 90 percent in cost savings, and 100 percent efficiencies, in practices,'" said Mislick.

ICEAA member colleague and fellow NPS faculty member, Tim Anderson, who teaches one of several courses in the MCEA program, was inspired to submit the nomination to the ICEAA for the Educator of the Year Award.

"I am very familiar with the MCEA program as I teach the Cost III: Risk and Uncertainty course for them, and am a strong supporter of their work," noted Anderson, highlighting the team's long involvement with MCEA that stretches back to 2010. Then, officials at the Naval Sea Systems Command asked NPS to explore the possibilities of creating the much-needed program and the duo has since been a force behind its continuing development.

The ICEAA Educator of the Year Award is intended for individuals or a team who have made outstanding education and training contributions over the past year by advancing the skills and knowledge of cost estimating and analysis through teaching, writing, editing and or publishing educational materials used to further the professional development of current and future cost professionals.