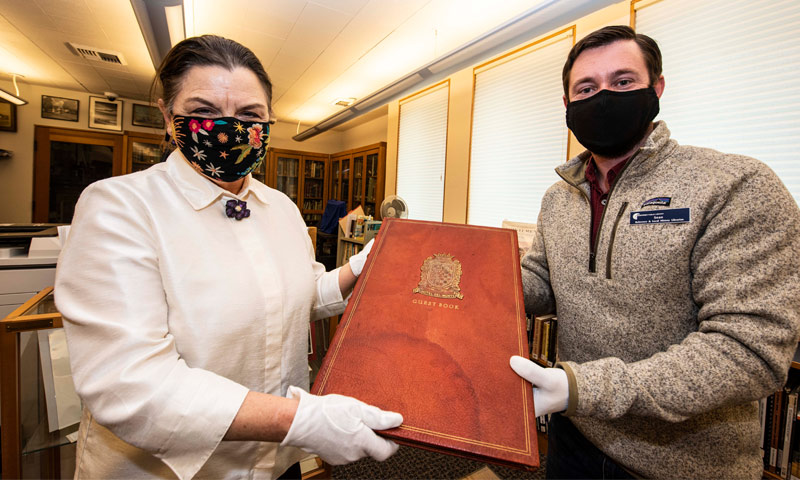 Irene Berry, Digital Services, Special Collections and Archives Librarian for NPS’ Dudley Knox Library (DKL), and Sean Briscoe, a Librarian with the Monterey Public Library, hold a one-of-a-kind personal hotel register for one of the Hotel Del Monte’s longtime residents. The unique piece of Monterey and NPS history was recently donated to the NPS Special Collections and Archives, managed by DKL.

Iconic names, such as literary giants Gertrude Stein and Alice B. Toklas, and aviation pioneer William Edward Boeing, are just a few of the visitors signed into a recently discovered 1920 registry for the legendary Hotel Del Monte, revealing again the grand reputation of the Monterey landmark that is now home to the Naval Postgraduate School’s Herrmann Hall.

The Hotel Del Monte Guest register from the 1920s, which found its way to NPS’ Dudley Knox Library Special Collections and Archives, includes an impressive array of notable signatures and glowing commentaries from guests, standing as a testament to the glory days of “the finest hotel resort west of the Mississippi,” as it was promoted in the early 1900s.

While other Hotel Del Monte registers exist, this one was unlike the official hotel register guests would pen their names to as they checked into the hotel. The finely bound, rust-colored register is in remarkable condition with entries beginning in the mid-1920s through the 1930s. There are other prominent names of the era included, like American mining engineer, diplomat and philanthropist John Hays Hammond, with more bound to be found as this unusual and not entirely official registry of the hotel is further examined.

The recently acquired Hotel Del Monte Guest register was received as a gift from a member of the community to the Monterey Public Library (MPL). The local history circle caught word of it, including former NPS Public Affairs Officer John Sanders, a well-known figure on campus who also served with the DKL as the university historian.

Sanders reached out to MPL’s California History Room Librarian Sean Briscoe with a recommendation to consider having the register added to the NPS special collection, which curates unique ephemera from the hotel years, 1880-1942. This led Briscoe to DKL Digital Services, Special Collections and Archives Librarian Irene Berry.

“The book is a valuable addition to the Dudley Knox Library's (DKL) Special Collections and Archives, which includes archival collections that focus on the history of NPS and the two Navy commands established on this site during World War II, the Del Monte Pre-Flight School, and the Naval Technical School, Del Monte,” said Berry.

While ephemera, relics, murals, furnishings, and a masterpiece diorama by artist Jo Mora from the hotel years remained intact following the Navy’s purchase, there have also been donations to NPS from locals who worked at the hotel, including an official hotel register, also filled with the names of famous patrons. So, what is the story with this one-of-a-kind piece?

The register belonged to long-time hotel resident, Mrs. Henry Clay Quinby, who was herself considered a local celebrity and a person of great charm. She held tea socials in a salon setting in her private rooms, according to Keeler’s Hotel Weekly, a publication that covered the hotel industry at the time. Quinby would live in the hotel for nearly 30 years and was quick to make friends with many of the visiting guests and would have them inscribe and autograph in her own special register. One visitor even penned a special poem about their visit.

“Mrs. Quinby’s husband, Henry Clay Quinby was the jeweler at Hotel Del Monte for many years. The couple lived onsite, and she was invited to stay on after his death in 1908. Her apartment became quite the ‘salon’ for distinguished guests and friends from around the world,” said Berry.

“Upon the 21st anniversary of her residence, in 1922, she was honored with a ‘tea’ given by her friends in [what] I speculate was the origin of this register book,” Berry added. “She was more than a guest. Mrs. Quinby was instrumental in the establishment of St. John's Chapel (relocated across Highway 1) and was known for her dedication to charitable work.”

For Berry, the register is yet another special piece of NPS history that helps the campus community revel in the truly unique history of the university and the facilities it occupies.

“The NPS archives, both the physical Special Collections and on the digital side, Calhoun - NPS’ Institutional Archive - are what I do for NPS, and I want to be sure readers know that there is a real, relevant reason we care about this book,” she said.

The resurfacing of Quinby’s unique keepsake register serves as a portal into the compelling history of the university’s home. See some of that history for yourself with the History of Hotel Del Monte digital collection on Calhoun at https://calhoun.nps.edu/handle/10945/47633.