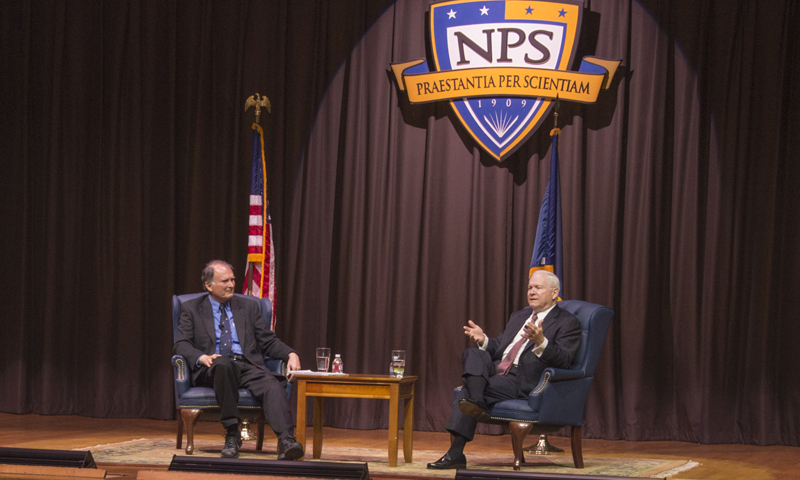 NPS Professor John Arquilla, left, and former Secretary of Defense Dr. Robert Gates, right, discuss Gates’ career and his view on various issues around the world during a Secretary of the Navy Guest Lecture (SGL) in King Auditorium, Jan. 5. Gates joined the Central Intelligence Agency in 1966 and spent nearly 27 years as an intelligence professional before serving as U.S. Secretary of Defense from December 2006 to July 2011.

The Naval Postgraduate School (NPS) welcomed former Secretary of Defense Dr. Robert M. Gates to the university for a candid discussion of his perspective on global issues, Jan. 5, kicking off the 2017 NPS Secretary of the Navy Guest Lecture series. Dr. John Arquilla, chair of the NPS Department of Defense Analysis, moderated the discussion before a packed house of students, faculty and distinguished guests in King Auditorium.

Arquilla introduced Gates as a “boundary-spanning person” who reaches into many different communities, and speaks the language at the political, strategic and technical levels.

“Maybe this boundary spanning started at home when you were little?” queried Arquilla.

Gates joined the Central Intelligence Agency (CIA) in 1966 and rose from an entry-level employee to the director over his nearly 27 years in the CIA. He served as U.S. Secretary of Defense from December 2006 to July 2011 under both Presidents George W. Bush and Barack Obama.

Throughout the moderated conversation, Gates offered trenchant observations about the U.S.’s current relationships with Russia, China and North Korea. He also discussed his views on effective deterrence, defense acquisitions, cyber warfare and terrorism.

“You cannot declare war on a tactic,” Gates explained, concluding that terrorism will unfortunately always be with us. “People forget that an act of terror triggered World War I. Also, a terrorist assassinated President William McKinley”, he noted.

Gates characterized terrorism as a tactic of the weak against the strong, and it will likely always be an issue that must be dealt with. “The question is, can you contain it to a level that does not disrupt daily life or distort the values and priorities of the country?” he added.

Gates stressed the importance of adaptation, and of looking toward our allies and partners for inspiration, pointing to Great Britain and Israel as examples of nations that have spent decades dealing with a persistent threat.

“You always have to adapt, nothing works forever. You have to be on the lookout and develop alternative ways to address these problems,” said Gates. “I think we need to have a better historical understanding of what is going on, which allows us to frame a strategy that is commensurate with the actual threat.”

U.S. Marine Corps Capt. Beau Pillot, a student in the university’s Graduate School of Business and Public Policy, says he found the SGL to be very informative.

“I would like to pursue a career in public service and listening to Secretary Gates’ perspective on the world provided me ways to posture my career to hopefully get to where he is,” said Pillot.