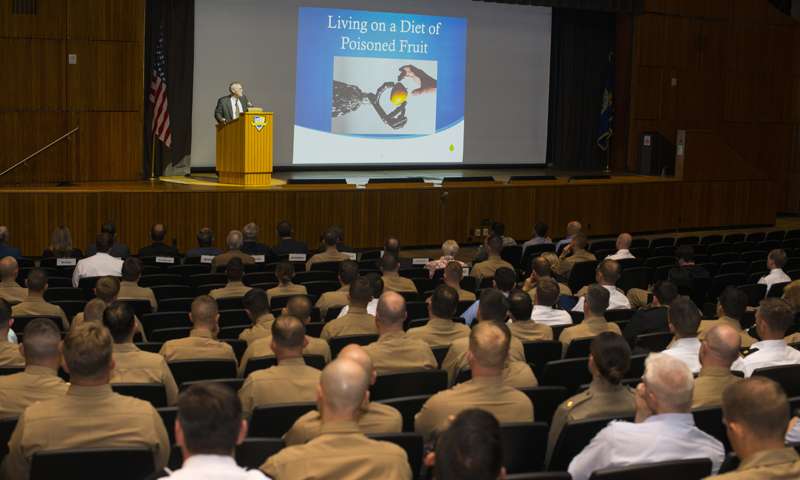 Former Secretary of the Navy the Honorable Richard Danzig speaks to NPS students, faculty and staff during a Secretary of the Navy Guest Lecture at King Auditorium, Feb. 9. Danzig offered insight into the national security implications of digital insecurity in a world where security must be built from essentially insecure components.

"Cyber systems bring with them inherent insecurity," said Danzig. "We are living on a [cyber] diet of poison fruit, but you can't skip the diet. You have to have the nutrition. The question is, how do you live with it?"

Throughout Danzig's address, he discussed the ramifications of the world's growing reliance on cyber systems and the affect of that reliance upon our "national well-being."

What matters are insecurities within the system that could allow an adversary to render us unable to act by, for example, bringing down our power grid or preventing our planes and missiles from flying Danzig explained.

But Danzig did not merely "admire the problem." He offered recommendations that ranged from questioning the necessity of some digital network connections to advocating the use of analogue technology where appropriate. He also noted NPS' foothold in the social sciences and their potential for further development in the cyber arena.

"We need to understand a lot better what causes humans to do what humans do, both as attackers and as defenders. When we understand that better, we will design better systems … There is a whole area of activity there that is very ripe for this school," said Danzig.

Danzig was sworn in as the 71st Secretary of the Navy on Nov. 16, 1998. He served as Under Secretary of the Navy between Nov. 1993 and May 1997. He is, among other things, the Vice Chair of the Board of Trustees of The RAND Corporation, a member of the Defense Policy Board and The President's Intelligence Advisory Board and a Director of the Center for a New American Security.