How-to Book on the Craft of Wargaming Hits the Streets

How-to Book on the Craft of Wargaming Hits the Streets 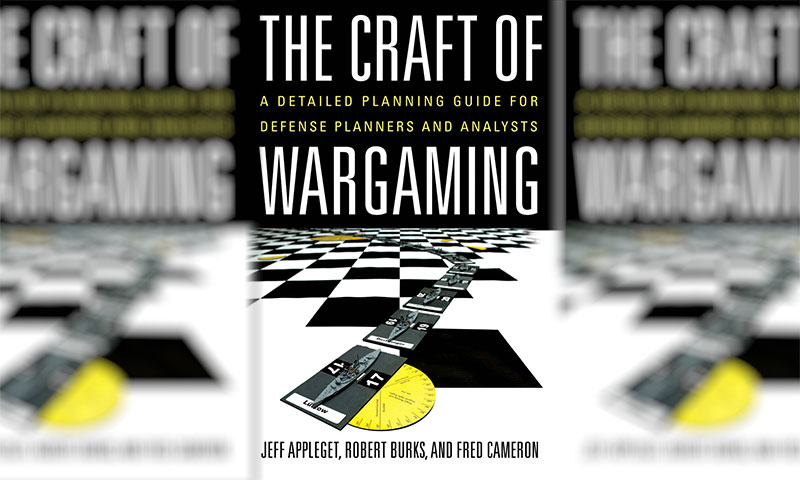 A new book, “The Craft of Wargaming,” aggregates the combined expertise of three longtime experts in the development and execution of wargaming. Retired Army Cols. Jeff Appleget and Robert Burks of the NPS Dept. of Operations Research, along with internationally-recognized Analyst Fred Cameron bring more than 100 years of wargaming knowledge to the seminal text.

Naval Postgraduate School (NPS) scholars in the field of wargaming have authored a seminal work that lays out a detailed planning guide for defense planners and analysts in a new book, “The Craft of Wargaming.”

The book is designed to support defense planners and analysts on their journey from wargaming apprentice to journeyman, with topics of particular interest to commercial wargamers. With its focus on design and development, the book serves a primer for initiates to senior commanders seeking to advance their knowledge and understanding of the wargaming field.

So far, the work has been well received.

“A coherent and comprehensive guide that is essential reading for any practitioner of professional wargames,” says Graham Longley-Brown, author of the “UK Ministry of Defense Wargaming Handbook and Successful Professional Wargames.”

Lt. Gen. Michael K. Jeffery of the Canadian Army called the new book, “A must read for any military leader sponsoring or developing analytical wargames.”

“There’s a lot of books about wargaming but there’s not many about how to do wargaming – that’s what this book is about,” said Kline.

Appleget says he and his coauthors took advantage of countless lessons learned through the activity of the university’s Wargaming Activity Hub, which Appleget leads. In just about every case, students are guided through the execution of a sponsored wargame, and the game must be structured to meet the sponsor objectives.

It was in 2014 that Appleget credits inspiration for his book from then Deputy Secretary of Defense Robert O. Work, because of his call to further the design and implementation of wargaming throughout the DOD.

“At the time, Bob Work set out to re-invigorate wargaming in DOD, which was a great call as it was much needed,” said Appleget. “But it became clear in the months and years that followed that there were a lot of different ideas of what DOD wargaming was, and what it should strive to be.

“Peter Perla had a great foundational book out there, ‘The Art of Wargaming’ written in 1990 that I read cover to cover before I designed the NPS wargaming course in 2009,” Appleget continued. “I adopted the general structure for wargaming design, the seven elements of a wargame, as well as many other gems, from the second part of Peter’s book.”

To date, Appleget has mentored over 90 NPS student team wargames and continues to learn in each matriculation he teaches the wargaming course.

“One critical takeaway that both apprentices and seasoned warriors need to take from our book is the idea of defining the problem correctly,” said Appleget. “After over 30 years of serving as an Army analyst and after working with 70-plus sponsors here at NPS, we can guarantee you that no one walks away from an initial interaction with a sponsor with a clear vision of what the sponsor wants.

“Many times, the sponsor is seeking help understanding his or her own problem,” he added. “Today’s world is so complex, and our technology is so advanced that the sponsor and the wargaming team need to communicate in a structured way several different times to ensure they have a common azimuth for the wargame’s creation.”