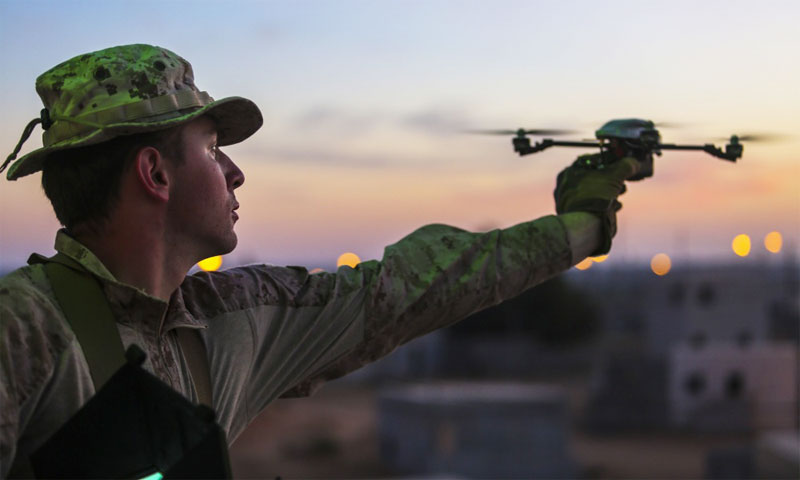 The InstantEye small unmanned aircraft system (UAS) is the latest in a series of JIFX success stories, where feedback from possible end-users helped developers match the UAS’ capabilities with the current needs and priorities of operators.

Since 2002, NPS’ quarterly Joint Interagency Field Experimentation (JIFX) program, and its predecessors, have brought together leading minds from academia, industry and the military to explore new technologies, and new ways existing technologies might prove beneficial in other applications ...  often with surprising results.

“We like to think of this event as a tech-oriented ‘Burning Man’ for government,” said Dr. Ray Buettner, JIFX director and associate professor of Information Sciences at NPS. “It’s a collaborative learning environment with minimal rules where producers can get direct feedback from their consumers.”

JIFX is not about acquisition, Buettner emphasized. Rather, the event offers a chance to sandbox these systems in a pseudo-operational field environment at Camp Roberts, an austere California National Guard base in central California.

Coordinated by the Consortium for Robotics and Unmanned Systems Education and Research, or CRUSER, each JIFX iteration allows hands-on exploration of what works, and what doesn’t work, across a spectrum of DOD relevant technologies and capabilities.

“A lot of these companies come out with a good idea,” said Carl Oros, an Information Sciences doctoral student and NPS research associate. “They get it out of the trade show and out into the field in the hands of special operators, Sailors or Marines and then get feedback from the actual technical operator."

“That’s the purpose of these field experiments,” he added. “It exposes capabilities to the whole social ecosystem so other people are able to see potential uses for things that [the companies] never envisioned.”

The Marine Corps’ effort to outfit infantry squads with portable, organic surveillance capabilities as part of its “Quads for Squads” program is a perfect example of exactly what JIFX intends to do.

Years back, InstantEye Robotics field tested its quadrotor, unmanned aerial vehicle (UAV) at a previous JIFX event, and got the kind of user feedback they needed to further develop the system. Flash forward a few years, and the Corps just placed an order for 800 more of these systems as a lightweight, low-cost intelligence, surveillance and reconnaissance (ISR) solution.

Even NPS researchers take advantage of JIFX to find tech to use for their own research. In 2013, Dr. Peter Guest, research professor emeritus in the NPS Department of Meteorology, became acquainted with the UAV, and saw that it could be used to collect atmospheric data in a new way.

Guest has been a polar meteorologist for well over 30 years. From the Arctic to Antarctica, he has examined – amongst other things – how variations in atmospheric conditions can affect radio waves.

Transmissions get particularly wonky in close proximity to the ocean’s surface in a gradient called an ‘evaporation duct’, where conditions can dramatically alter signal transmissions for both friend and foe alike.

Guest discovered initially through JIFX, and validated on Monterey Bay, that the same UAS the Marine Corps equipped its infantry squads with could be used to hover in the evaporation duct close to the water’s surface and directly collect the data he needed. He has subsequently used the platform to conduct research in both the Arctic and Antarctica to build global climate models.