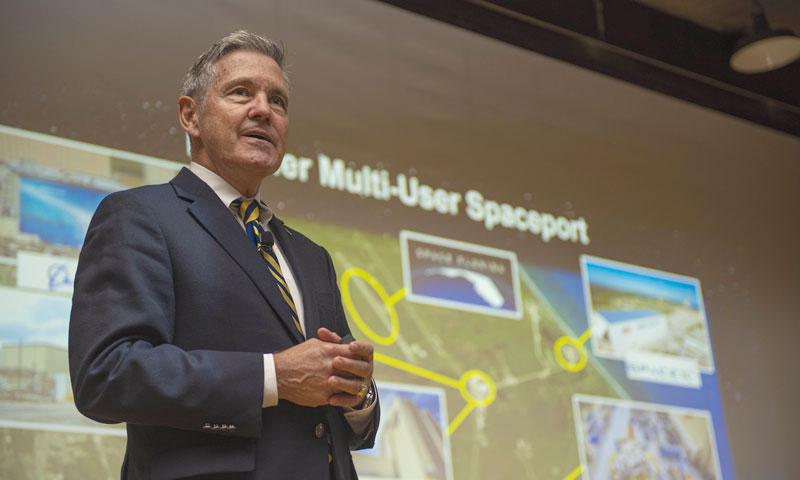 Cabana, who has spent a total of 37 days, 22 hours and 42 minutes in space, was invited to NPS by the university’s own Space Systems Academic Group Chair Dr. Jim Newman, who served with Cabana as an Astronaut aboard STS-88, the first Space Shuttle Mission to the International Space Station.

In opening his remarks, Cabana addressed the challenges faced by Kennedy Space Center throughout his 11-year tenure as its director, with the center experiencing massive downsizing throughout the early years of the decade.

“In July of 2011, the Space Shuttle Atlantis flew its final mission,” said Cabana. “It landed on a Thursday and on Friday, 2,000 contractors got pink slips and walked out the door. We went from a center where everything was paid for by the Space Shuttle to having not enough money to maintain the facilities that we had. We had to define what we wanted our future to be.

“There are not many times in your life when you get to define what you want your future to be,” he continued, “but that is one of the key things that you as leaders need to do ... Communicate a clear vision of the future, of what we want to be, and get your team to own it.”

“We sent out a notice of availability to all of our commercial partners, asking if anyone had any interest using our facilities. At the time, not everyone supported that way of doing business, but we have transformed Kennedy Space Center from being a one program government facility to a multi-user space port,” said Cabana.

Amongst these commercial partners included a 20-year agreement that the Kennedy Space Center made with Elon Musk’s SpaceX in July 2014. Since then, they have conducted 19 successful launches including their March 2, 2019 launch of a Falcon 9 test flight to the International Space Station, and the latest launch of the Falcon Heavy in June, carrying NPS’ own NPSAT-1 into orbit. Along with SpaceX, several other partners, including Boeing, Lockheed Martin and Space Florida, have undergone commercial ventures at Kennedy Space Center.

In total, Cabana said, 90 separate agencies have entered agreements with the center representing a wide range of partners – academia, industry and government agencies.

“In all of human history, three nations have sent humans to orbit, the United States, Russia and China,” said Cabana. “Today in the United States we have three U.S. companies building orbital spacecraft, Lockheed Martin, with the Orion spacecraft for deep space, as well as Boeing and SpaceX with the Starliner and Crew Dragon for commercial access to the International Space Station.

Cabana then played a short video for the crowd celebrating the rich history of the Apollo space program and introducing the Artemis program, whose namesake is the twin sister of the Greek God Apollo. The Artemis program will see NASA return to the moon in 2024, where the first woman and next man on the moon will use innovative technologies to explore more of the lunar surface than ever before.

“I'm a huge proponent of going to the moon before we go to Mars to prove the systems that we need to operate in deep space and keep crews alive,” said Cabana. “Right now, a Martian mission would be one-and-a-half to two years. It takes six to eight months to get to Mars, another six to eight months on Mars for the planets to align for a six to eight-month trip home. And we have done studies saying you have to have as much as 14 to 18 metric tons of supplies and equipment pre-staged on Mars before you can send humans to keep them alive, so we have a lot to learn about keeping humans alive in deep space and the lunar surface creates a great stepping stone to do that.”

Unlike the Apollo mission, Artemis will be a multinational collaboration between NASA and both its corporate and international partners.

“There are all kinds of things that we can learn by having people on the moon in a sustained way, from lunar surface power, to solar electric propulsion. The sooner we can get back to the moon with our international partners and stay there, the sooner we can get to Mars,” said Cabana. “We have an outstanding future in space and as great as the last 50 years of space exploration was, I have a feeling that the next 50 years will be even better.”

Cabana then took the time to give personal anecdotes and share a series of photographs that he had about his, along with NPS Space systems Chair Jim Newman’s, journey to becoming the first crew to the International Space Station.

Before closing his presentation, Cabana told the crowd that his goal before he leaves is to have U.S. astronauts flying U.S. rockets back to the International Space Station that he left over 21 years ago, and that that goal will be met within the next 6-8 months.

“It is in our DNA as humans to explore, and I can’t imagine not being able to be a part of that,” Cabana said in conclusion.

Cabana’s complete presentation to the university is available on the NPS YouTube Channel.