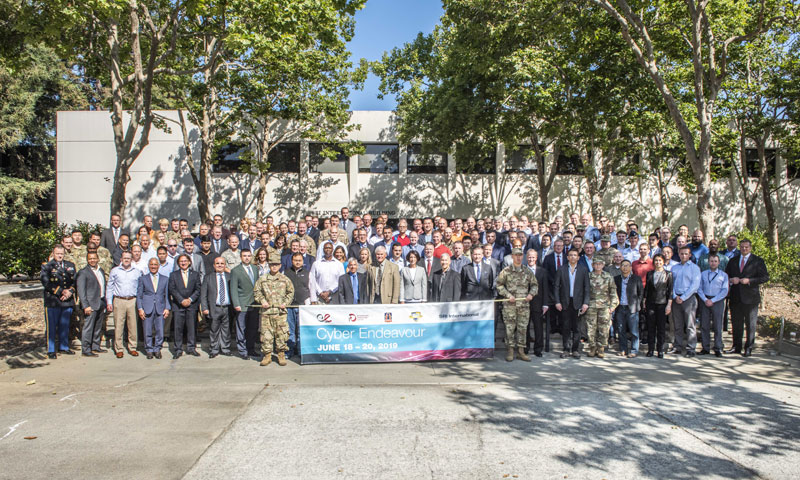 Originating in 2011, the annual conference sponsored by the DOD Information Operation Center for Research (IOCR), located at the Naval Postgraduate School (NPS) and the U.S. Army Reserve’s 335th Signal Command, seeks to provide an interactive, working level event to discuss the most critical challenges in the information environment facing our nation and to identify potential solutions.

“The idea is to bring experts, practitioners and policy people together so at the end of the conference they have a better idea of the threats posed by Russia and what we can do about it,” said IOCR Director Dr. Hy Rothstein. “There are a lot of conferences on cyber, but most of them are actually too large. We keep it small because we want to have an exchange of ideas, if thousands of people are in an auditorium, or if you’re in a separate room piped in by a screen, people can’t stand up and say something when it’s Q-and-A time after a panel.”

Throughout the conference, participants had the opportunity to engage with a plethora of influential speakers, experts in the information warfare domain including The Honorable Chris Inglis, former deputy director of the National Security Agency; retired Army Col. Bryan Sparling of Army Cyber Command; Dartmouth College Department of Government Chairman, Dr. Russell Muirhead; and, Timothy Thomas of the MITRE Corporation.

“One of the biggest problems with cyber is getting all these heads in the same room to try and develop better ideas about the best policy to counter the threats facing the U.S. and our western and eastern partners,” said Assistant Professor Ryan Maness from NPS’ Defense Analysis department, who served as a panel moderator during the event. “People take these ideas back to their respective commanders, to their respective research institutes, and to their respective bosses to maybe facilitate some of the agreed upon ideas.

“That being said we're still learning a lot,” he continued. “Conferences like these can help us ask the questions we need answered but change doesn’t happen overnight. I think advising the best policy forward where escalation and possibly armed conflict does not happen as a result of conflict in the cyber domain is the main goal.”

A cornerstone of the event included a series of moderated panels between key figures representing all facets of cyber. Each panel facilitated dialogue between the panelists and the audience on important issues ranging from Russian attempts to undermine NATO, advancing U.S. interests, ensuring the integrity of democratic elections and overcoming barriers on the way ahead.

“This year’s topic is so critical because it is right in our face, we're seeing it happen every single day. It's in our news, it pervades every aspect of our lives right now, so it's critical that we all come together to identify potential solutions in a collaborative way,” said panel moderator Austin Branch. As president of the Information Professionals Association, and executive director for information strategies and programs for the COLSA Corporation, Branch has a compelling perspective.

“The networking aspect of these events are critical. From a corporate standpoint these networks are helpful because we can find ways to contribute to larger efforts where we might be able to bring our skills in a more definitive and helpful way,” said Branch. “On the Information Professionals Association side these venues are critical for our members that we stay engaged and that we're informed enough so we can advocate on their behalf.”

This year’s Cyber Endeavour offered a new fresh perspective with the inclusion of U.S. international partners including representatives from NATO, the United Kingdom and the Armed Forces of the Ukraine.

“On a daily basis we try to protect Ukrainian society from Russian disinformation ... In such a conference we have the ability to share our thoughts, to speak with practitioners, to speak with people with great personal experience in the field of information operations,” said Armed Forces of Ukraine Col. Andri Dyda, Ukraine Chief of Defense, STRATCOM Assistant. “Informational security plays a very important role in Ukraine’s efforts against Russian aggression as the non-kinetic part of the war is more significant.”

Over its eight-year run, Cyber Endeavour has been hosted by a variety of research universities around the country. This year, organizers saw the value of staying a bit closer to home.

“SRI has been around for 75 years now, and part of the decision to bring this conference to SRI was to show that we are not only part of the defense research community and further evolve our relationship with NPS,” said Moyer. “We also have interns now that are from NPS working up here and conferences like these do a great deal to developing a formal relationship and evolve future projects.”

In addition to his role as a lab director for SRI, Moyer also attended the conference as a representative for his reserve unit, which he serves as the 151st Theatre Information Operation Group Commander, in order to bring a valuable uniform perspective to the biggest challenges in the information domain.

“We are now living in an era where all high-value targets, from Presidents to oligarchs to major commands, all have substantial media footprints,” said Moyer. “We have begun to leverage those footprints ... and that’s what makes conferences like these so valuable. In the future, we can leverage this data with machine learning and artificial intelligence and that is something that SRI has been working on.”