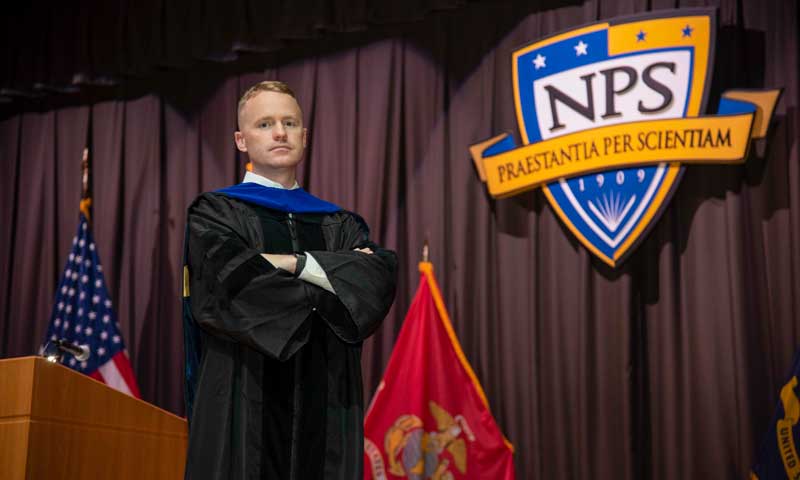 Maj. Ezra Akin is the first Marine to graduate from the Marine Corps’ Doctor of Philosophy Program - Technical (PHDP-T), initiated to develop a cadre of strategic thinking, technically-astute uniformed leaders capable of guiding the applied research and innovative thought necessary to create warfighter advantage in the modern, cognitive age.

When the Marine Corps developed its new Doctor of Philosophy Program (PHDP), the service recognized the need for a cohort of strategic thinkers and technical leaders capable of the applied research and innovative thinking necessary to develop warfighter advantage in the modern, cognitive age. The Technical version of the program, PHDP-T, just celebrated its first graduate, with Maj. Ezra Akin completing his doctorate in operations research from the Naval Postgraduate School (NPS), Sept. 25.

Combining his operational background with a PhD in Operations Research, Akin now possesses both the operational and technical mastery necessary to apply innovative thinking to the most technically-complex challenges.

“The Marine Corps recently determined that we have a legitimate requirement for uniformed PhDs,” said Marine Corps Col. Randolph Pugh, NPS Senior Marine Corps Representative. “Identifying technological breakthroughs, determining how they should be integrated into our warfighting concepts, and then guiding the Marine Corps’ research and development efforts will require officers with highly developed expertise as well as connections to a large network of experts that this PhD program helps Marines like Akin develop.

“In the past, the Marine Corps generally integrated new technologies as they reached maturity,” continued Pugh. “Now we can pursue, or even guide the development of war-winning technologies years or decades ahead of time which we think will help give us decisive combat advantage.”

NPS, and even Akin himself, has been engaged with the Marine Corps in the evolution of the technical version of the PHDP program, recognizing the critical importance of both strategic thinking, and technical mastery, to meet the higher education needs for its future leaders.

Akin’s doctoral dissertation, which further advanced the research he began while earning his master’s degree from NPS, involved the introduction of estimators in random sample simulations in military contexts, demonstrating a reduction in variance without sacrificing speed. His results are fundamental contributions to the Marine Corps’ ability to improve the speed of analysis in edge computing.

For Akin, it was just the beginning of his contributions to the service.

“Some of the things the Marine Corps will now expect from me is to inform decision makers with regards to what the future fight will look like, and what are some of the potential solutions or better ways of thinking about some of the complex problems we’re facing,” said Akin.

“NPS is the obvious choice to educate our technologists,” stressed Pugh. “The faculty has extensive expertise and robust relationships with other research-universities and industrial partners. They also have years of involvement with naval capability development which means that they understand what our PhDs will need to know and know how to do, as well as the challenges of forecasting emerging technologies and tracking them into capabilities.”

Being the first Marine to graduate with his doctorate from the Marine Corps PHDP-T, Akin has set the standard for future Marines that will follow in his footsteps.

“Ezra is a pathfinder and I think that the Marines and the future PhD candidates owe him a large debt of gratitude for helping to establish the program and then clearing a trail that they can now run down,” stated Pugh. “He has done something that no other Marine has ever done.”

“It’s a great opportunity to get selected for the program,” said Akin. “It’s definitely a mark of your leadership’s respect for you and the investment you can provide the Marine Corps in the future.”