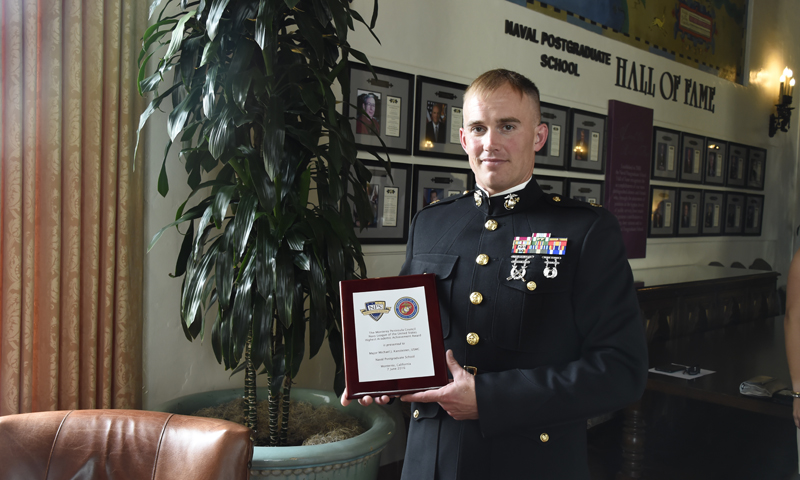 “I’m very honored to receive this award. I didn’t come here with the intention of winning any awards,” said Kansteiner. “I just worked hard and had the support of my family and classmates.”

“Doing the research for my thesis really broadened my thinking on problem solving,” said Kansteiner. “It made me think in different ways and opened my mind to consider different possibilities, which also helped me on other classes.”

Kansteiner hopes in the future that his thesis project will be moved from the DOD to the Department of Homeland Security (DHS) to ensure it will be broadly applied to the whole government.

Currently, non-DOD third-party information networks represent a significant risk to the DOD information network. Kansteiner developed an incentive-based system that the DOD could use to influence and strengthen third party networks’ network security. His thesis also resulted in the essential design of the Enhanced DOD Cyber Security/Information Assurance (CS/IA) Program.

“It’s been a very challenging two years here at NPS. I haven’t been deployed, but at times it may have seemed like it. At the same time you can’t complain about being in Monterey, California,” said Kansteiner. “I have always considered myself a good student but this place definitely challenged me.”

Following graduation, Kansteiner will report to the U.S. Strategic Command (STRATCOM) in Omaha, Nebraska, where he will work in the information operations field.