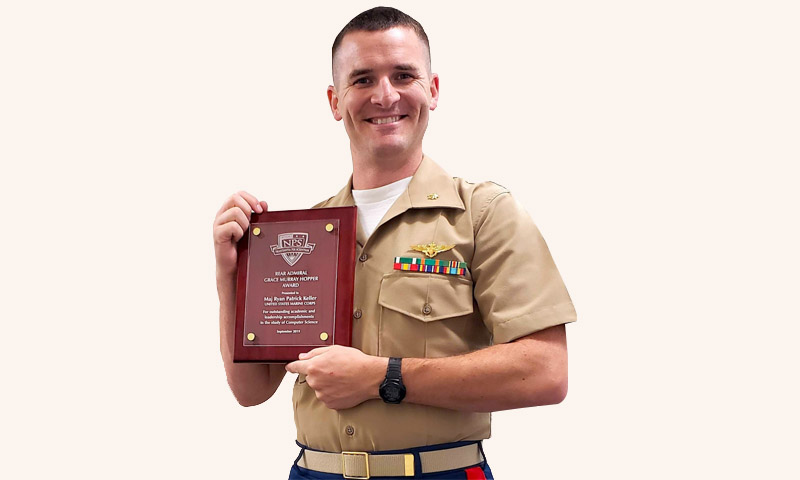 Maj. Ryan Keller was awarded the Rear Adm. Grace Murray Hopper Award for outstanding academic and leadership accomplishments in the study of Computer Science in September 2019 while attending Naval Postgraduate School. Keller graduated with a Master of Science degree in Computer Science in 2019 and currently serves at Marine Corps Tactical Systems Support Activity at Camp Pendleton as the command's lead for business practices and the Zero Trust pilot program.

Many of the officer billets at Marine Corps Systems Command and Marine Corps Tactical Systems Support Activity are filled with Marines who recently graduated with a master’s degree from Naval Postgraduate School, located in Monterey, California.

When Marines complete their program at NPS, they receive orders to a new command and begin a three-year utilization, or pay-back tour, as part of their four-year commitment for continued military service.

According to Marine Corps Order 1524.1, NPS is the primary source of graduate education for the Navy and Marine Corps. “Its naval-focused curricula are central to the development of a resilient, knowledgeable and adaptable professional force. Each program is specifically designed to match educational skill requirements with the knowledge, skills and abilities required by the major area sponsor.”

Many of officers are working in a new career field and applying highly technical skills needed to support certain specialties. The Marine Corps has been sending officers to NPS for several decades and in recent years began sending enlisted Marines to fill critical gaps needed by the naval services.

Many people often mistake attending NPS as a retention tool for the Marine Corps, but Col. Randy Pugh, senior Marine representative and associate Dean of Research at NPS, explains that the program is actually designed to make Marines more capable as warfighters and to serve the evolving needs of the Marine Corps in the areas of science, technology, engineering and mathematics (STEM)space systems operations, computer science, operations research, electrical engineering, information and electronic warfare.

“Completing NPS and earning a master’s degree teaches students things they would never get through normal experiences in the fleet or field,” said Pugh. “Students leave NPS with knowledge and skills that are different than their peers who did not come to Monterey.”

There are nearly 1,300 students enrolled year-round at NPS. The student body consists of personnel from the five uniformed services, officers from approximately 30 partner countries and a small number of civilian federal and state employees.

Most NPS technical degree programs last two years. Once students graduate, they receive orders to serve in specific billets spread across 78 different organizations and at 30 separate bases and stations. Upon graduation, students report to their new commands and begin working in their new roles in the 88XX fields.

MCSC, located in Quantico, Virginia, and MCTSSA, located at Camp Pendleton, California, have 60 billets for Marine officers that are fulfilling utilization tours in various roles.

“The NPS GEP officers are critical to MCTSSA as they support significant enterprise-level initiatives and efforts,” said MCTSSA Commanding Officer, Lt. Col. Michael Liguori. “We get highly motivated officers with a desire to solve complicated problem sets. Our mission is to build capacity where needed within the Fleet Marine Force and these Marines bring tremendous talent and critical thinking skills to develop and deliver new capabilities for the FMF.”

There are approximately 16 NPS graduates assigned to MCTSSA, filling critical roles within the command’s cyber, naval integration and acquisitions divisions. Liguori also attended NPS and earned a Master of Science degree in Information Technology Management in 2014.

His utilization tour was spent as a Branch Head at Manpower and Reserves Affairs responsible for overall portfolio and operational management of manpower systems and data with a focus on DevSecOps, Data Center and Network Operations and associated system Information Assurance and Information Management capabilities.

“Combined with the MCTSSA civilian workforce and experience, MAGTF [command, control, communications, computers and intelligence] system, and the tactical networks, our NPS officers provide real-time technical experience because they’re fresh from the classroom and ready to apply what they learned,” Liguori said.

MCTSSA’s current executive officer, Maj. Adam Foushee, also attended NPS and earned his Master of Science degree in Electrical Engineering in June 2016. Foushee served his utilization tour at MCSC in Quantico, Virginia, from June 2016 to June 2019, where he served as the lead systems engineer for Terrestrial High-Capacity Communications systems.

Foushee, a CH-53E pilot, recommends to others going to NPS to take the graduation education opportunity as a chance to ‘bloom where you’re planted.’ He advises for students on their way there to take courses in systems engineering and program management because it is a foreign language to most and it will pay dividends in every utilization tour. He said this is how they will become more tactically proficient while continuing their military career.

Learn more about the Marine Corps Graduate Education Program on www.marines.mil. You can find more information about other NPS educational opportunities at https://nps.edu.