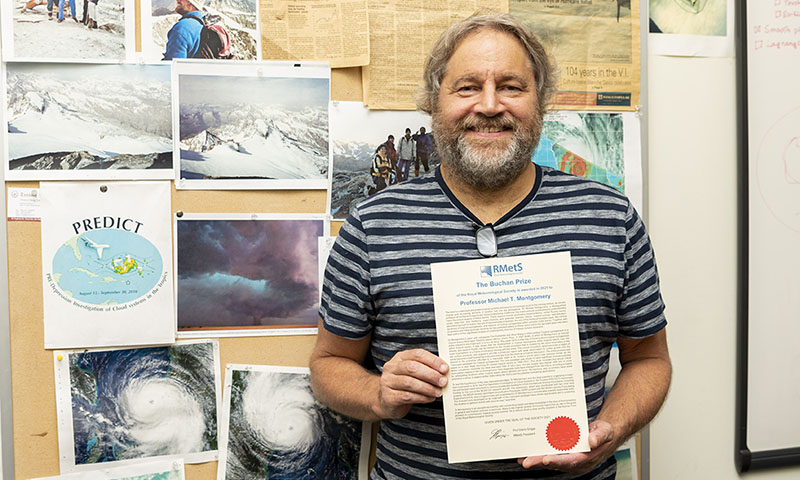 NPS Distinguished Professor of Meteorology Michael T. Montgomery has been awarded the 2021 Royal Meteorological Society (RMetS) Buchan Prize. The award recognizes an RMetS member whose published research over the previous five years, cumulatively, represents the most important contributions to the field of meteorology.

Expanding the theoretical knowledge of hurricanes and tropical cyclones is essential to improving early warning systems, especially in a changing climate with increasing potential to fuel the severity of these weather events and their impact on military operations.

In recognition of his highly-impactful research to advance that knowledge, Naval Postgraduate School (NPS) Distinguished Professor of Meteorology Michael T. Montgomery has been named the 2021 recipient of the Royal Meteorological Society (RMetS) Buchan Prize. The award recognizes an RMetS member whose published research over the previous five years, cumulatively, represents the most important contributions to the field of meteorology.

Throughout his career, Montgomery’s research has led to countless seminal contributions to our understanding of varied theoretical aspects of these dangerous storms, providing foundational science for the Department of the Navy’s Climate Action 2030 plan to prepare for and combat climate change impacts, and to build a climate-ready naval force.  And his work continues … Montgomery is currently in the first year of a four-year, $1.1 million grant from the National Science Foundation to advance his research into these powerful storms.

Montgomery first became interested in formation and intensification of tropical storms, known as cyclogenesis, after attending a lecture related to the topic as a Harvard graduate student. Around that time, the Summer Olympics were taking place in Seoul, South Korea, and Montgomery, an avid swimmer, was intently watching the swimming competitions.

Just as the Olympics were getting underway, America was watching a category 5 hurricane named Gilbert barrel down the Caribbean in 1988, killing more than 300 people in Jamaica, the Cayman Islands, and Mexico. Hurricane Gilbert is still tied for the second most intense Atlantic hurricane in history.

With all of these events happening simultaneously, Montgomery said he was compelled to learn more about the science – fluid mechanics, thermodynamics and physics – behind these storms.

Montgomery has supported the research of many NPS master and PhD students. In fact, NPS maintains a strong relationship with the Naval Oceanography community. Promotion to the rank of commander or above requires an advanced education leading to the Master of Science in Meteorology and/or Physical Oceanography that is almost exclusively obtained at NPS.

“Dr. Montgomery’s enthusiasm was infectious in the classroom,” said Lt. Cmdr. Scott Britton, a former student of Montgomery’s currently serving as the METOC Officer for Carrier Strike Group 8. “As my research advisor, I was able to explore with a great amount of independence. In addition to learning a great deal about tropical systems, I worked with Amazon Web Services and got my feet wet with advanced cloud computing, which was challenging, but rewarding. Dr. Montgomery always pushed us to innovate and discover beyond the classroom and I apply these lessons every day as a naval oceanographer afloat.”

Today, Montgomery supports the research of several graduate students at NPS to track hurricanes, or the conditions that could potentially form a hurricane. They look for recirculating regions of low surface pressure that provide a protected space for a disturbance to move with a parent wave, and become a self-sustaining storm. This process was coined as the “marsupial paradigm” by Montgomery and his colleagues Tim Dunkerton and Zhuo Wang in 2009 because they related the low-pressure zone within the parent wave or disturbance to a marsupial pouch that keeps the baby safe.

Since these zones also have an intrinsic boundary that tends to protect them from exterior intrusions of dry air (often called “anti-fuel”) and retain the moisture (“fuel”) that the deep convective thunderstorms are supplying to the air within the pouch, these zones are called “pouches.” One implication of this new model is that a well-defined pouch acts to protect a fledging disturbance from dry, desert winds off Africa, allowing the proto-vortex within it to strengthen and intensify into a tropical depression, and eventually even a hurricane. In the Atlantic, there’s about a 20 percent chance a disturbance will become a tropical storm.

Since that initial paper, Montgomery has worked with several co-workers to publish a series of papers further fleshing out the theory and its potential forecasting applications. In 2010, he led a major field experiment funded by the National Science Foundation (NSF) called the Pre-Depression Investigation of Cloud Systems in the Tropics, or PREDICT, to test the marsupial paradigm. Coordination with NASA’s Genesis and Rapid Intensification Processes (GRIP) project and the National Oceanic and Atmospheric Administration (NOAA) Intensity Forecasting Experiment (IFEX) project led PREDICT to huge successes in showing how applicable the paradigm was in hurricane predictions.

A lot of these pouches come off Africa, and Montgomery and NPS Meteorologist Mark Boothe have developed an automated technique to look for them. On July 7, for example, they saw 24 potential pouches. For each one, they mapped out different factors like relative humidity and wind speed, among others, to see how much potential each pouch had to nurture a tropical depression or hurricane. Several students are looking at case studies from the past to better understand which factors are the most important … It’s critical research, and Montgomery keeps his students engaged in every aspect of it.

“We want to teach our officer students the cutting-edge of this research to ensure they are prepared to make wise and sound decisions whether they’re at sea or planning air operations,” Montgomery says.

U.S. Air Force 2nd Lt. Nicohl Corretjer, a student in NPS’ Meteorology program, is performing her research with Montgomery. She has shared a deep interest in hurricanes for a long time, coming from Puerto Rico which is all too familiar with these extreme weather events. After taking a couple of Montgomery’s classes early on, she quickly decided she wanted to work with him.

“I like his personality and his teaching style is very straightforward, which is something I really appreciate,” she says. She sees her experience directly helping her at her next station as a forecaster for the Air Force in Hawaii.

Montgomery remains passionate about furthering society’s knowledge on hurricanes, especially in the realm of intensification and the many distinct factors that determine whether a tropical storm intensifies, or not.

The marsupial paradigm is just one of many contributions Montgomery has made to storm theory. Others include asymmetric balance theory, vortex Rossby waves, vortex alignment and resiliency, super-intensity and potential intensity theory, tropical-cyclone intensification, the role of resolved eddy processes, the role of the frictional boundary layer, the vorticity dynamics of tropical cyclogenesis, and aspects of tropical cyclogenesis within synoptic-scale waves.

Montgomery’s grant from the National Science Foundation will support research into secondary eyewall formations. When storms intensify significantly, they can actually form an outer eyewall, and in rare cases, even a third. How these outer eyewalls are formed is not well understood, so it will be up to Montgomery, Boothe, some colleagues, and a few NPS students as well, to explore this question while working on a few other projects along the way.

“It’s going to keep us busy,” Montgomery smiled. “We have lots to do.”