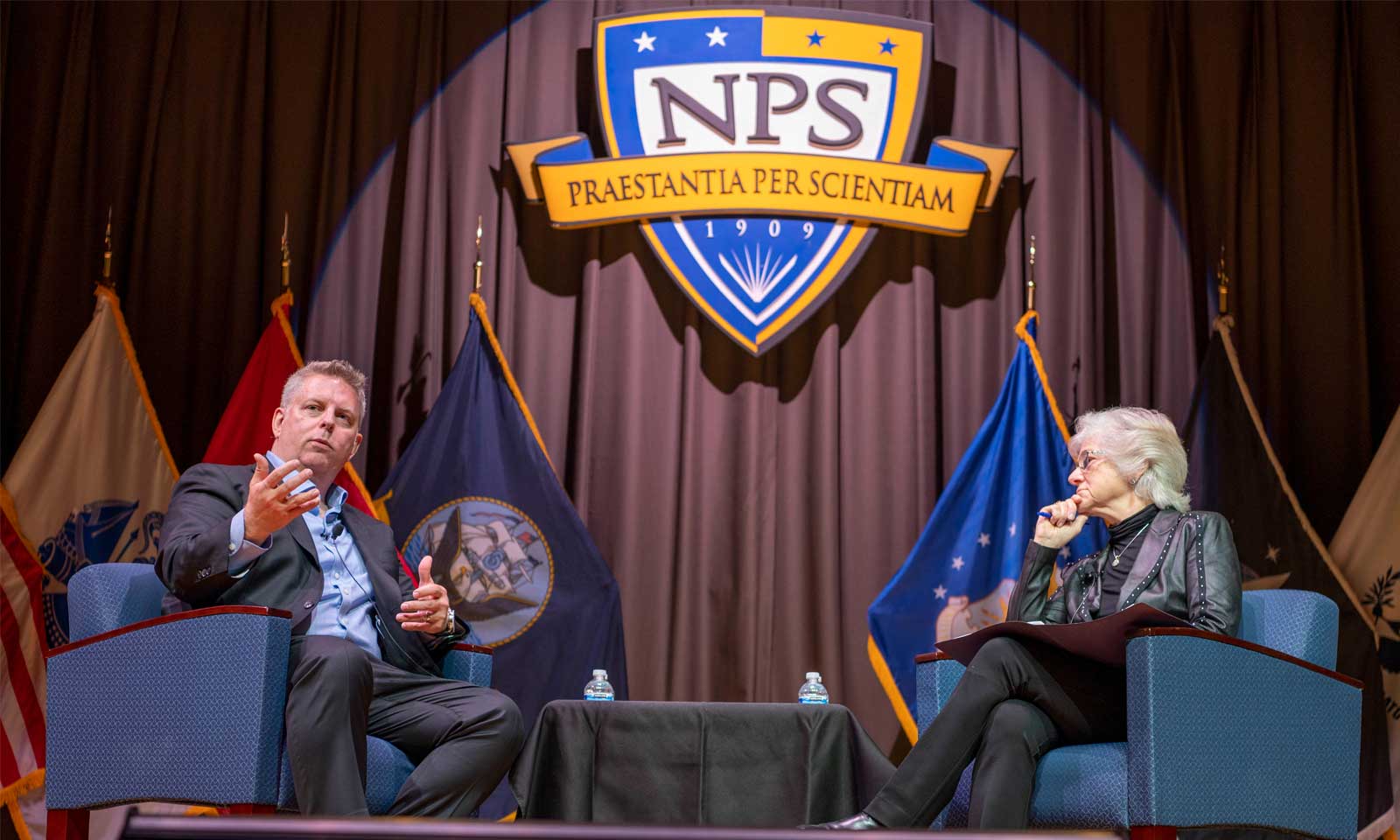 Jason Zander, executive vice president of Strategic Missions and Technologies at Microsoft, spoke to Naval Postgraduate School (NPS) students, faculty and staff about cyberspace, the fifth domain in Strategic Competition, and the challenges in keeping up with this rapidly developing front during NPS’ latest Secretary of the Navy Guest Lecture (SGL), June 6.

Held inside King Auditorium and broadcast live online, Zander discussed critical issues in cyberspace and the role of public-private partnerships during an informal one-on-one discussion with NPS President retired Vice Adm. Ann E. Rondeau. She opened the dialogue by asking about change, and how Zander and Microsoft approached this challenge over the years.

“As a company, Microsoft went through a lot of cultural transformation from how we compete to how we build and ship software, and I think it’s actually relevant to cyberspace as well,” Zander said. “We’ve been successful for the past couple of decades. Yet the whole world changed around us, from adoption of newer technology, and a faster moving pace.

“We had to make a lot of changes to not only survive but also thrive in that environment,” he continued. “We’re very excited about that and the opportunity everybody has. I think we’ll find a lot of similarities when I talk to my peers across defense departments.”

Zander and Rondeau then transitioned the discussion to a focus on national and global security, and how adversaries can use cyberwarfare, targeting commercial entities in their efforts to exploit vulnerabilities in a country’s infrastructure.

“How do we find and remediate as quickly as possible to make sure people can’t get through our defenses using ransomware and the like?” asked Zander. “I shudder to think what would happen if people went after critical infrastructure and shut down, say, the United States power grid.”

Rondeau acknowledged similarities in the security concerns among private and public sectors, such as speed and the urgency of change, among others that have come to the forefront in recent months due to the conflict in Eastern Europe.

“One thing that was super interesting to [Microsoft] was as the lead-up to the war in Ukraine kicked off, we started detecting massive cyber-attacks coming from Russian state actors,” said Zander. “The most interesting thing to us was seeing the correlation between those cyber-attacks and kinetic actions being taken in the actual war.”

Witnessing this direct correlation between cyber attacks using commercial infrastructure, and concurrent military operations, demonstrated the need for his company to work with the military to develop mutually-beneficial solutions.

“We never expected to be in a position as a commercial software company to see that. It just shows you how intrinsically woven these things are,” Zander said. “Imagine securing our critical infrastructure like borders, water, and all the other things you need as a sovereign country. There are folks out there that are thinking every single day how to go after that stuff, building their offensive capabilities. That’s something we have to keep up with and we’ll have to partner together on that.”

Under the recently announced Cooperative Research and Development Agreement (CRADA) between Microsoft and NPS, both organizations aim to share their knowledge and resources, developing ways to keep up with the rapidly increasing pace of adoption of new technologies, and this supports the warfighter and national security.

“With this CRADA, we’re looking at different ways of knowledge acquisition, knowledge use, and applications of knowledge and research for problem solving,” said Rondeau. “It’s our first step to really changing up how we process knowledge and skills and apply them immediately to the problems that are in front of us and anybody that we serve.”

Zander explained the value of collaborating with NPS’ operationally-experienced students and defense-focused faculty for insight.

“We’re excited about the innovation,” he said. “From our perspective, we get a lot of raw tech that we think makes sense, but we want to get the feedback. Does it make sense and what could we be doing differently with that?

“I think the commercial sector has been growing at warp speed in some of these areas,” he continued. “In some places, you’re going to come up against that technology. But if there’s a good way for us to be able to take that technology, bind it to the mission, get feedback and make the platform better … We’re excited about that, and if it helps their mission, then that’s going to be a win-win.”

Following their discussion, Zander and Rondeau fielded questions from NPS students in the audience. One student asked how Microsoft’s drive for change and ability to innovate with speed could be taught to the DOD to keep pace with emerging technology such as cyberwarfare.

“I think that awareness and understanding of these partnerships are a big thing,” Zander responded.

“But how do we actually bring down the friction [between innovation and bureaucracy] in a responsible way?,” he posed.  “I think the real question is, are we really exploring the art of the possible deep enough and quick enough? When we do, we will figure out how to innovate responsibly, and how to do it in a fair and competitive way going forward.”

For more information about the NPS Secretary of the Navy Guest Lecture program, and to watch past lectures, visit the NPS SGL website.