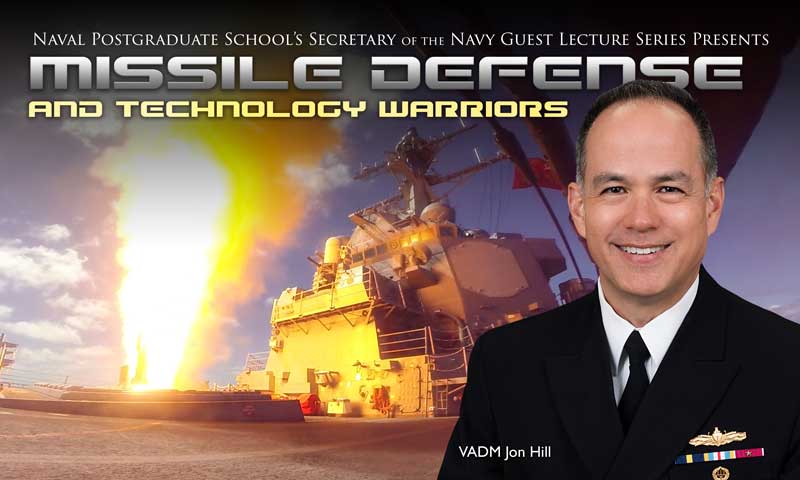 Hill talked about the MDA and his role in overseeing the agency’s mission to develop, deliver and sustain layered capabilities to defend the Unites States, deployed forces, allies and friends against missile attacks in all phases of flight. A graduate of NPS’ Applied Physics and Ordnance Engineering curriculum, Hill stressed the role of the evolving threat in driving continuous improvement across the system.

“You have to have a credible missile defense to be a credible missile deterrent,” stated Hill. “As you walk into the evolution of the threat, we are well geared to take on and grow in the areas of hypersonic missile defense. We’re working to integrate all of these different pieces into our defense systems because the adversary is integrating their ballistic cruise missiles and unmanned air vehicles and trying to make me nervous. However, I’m not nervous because I believe we’ve got the best defenses on the planet.”

Through all of MDA’s development and innovation, along with collaboration with partners and allies, Hill made clear that the warfighter is at the forefront of his mind.

“I’m going to take care of the warfighter first,” he said. “I’m going to make sure we’re producing and getting things to the field. We’re going to be deploying capabilities, assessing the threat, and bringing in technology and working on hardcore developments so that we can continue to support and defend the nation.”

Part of his effort to take care of the warfighter, Hill explained that the foundation of all past, present and future defense systems is education.  He quoted Chief of Naval Operations (CNO) Adm. Michael M. Gilday, in saying, ‘Learning, the ultimate warfare enabler, and the intellectual development of our Sailors is the most critical warfighting capability.’

“[CNO] is pointing towards education as a foundational aspect to what you are as a naval officer and what we will do as we progress through our careers, because it’s not going to get easier,” said Hill. “The threat is constantly evolving.”

Following his prepared remarks, Hill spent time answering questions from NPS students in the Meyer Scholar Program, named for the Father of the AEGIS Combat System retired Navy Rear Adm. Wayne E. Meyer. The objective of the Meyer Scholar program is to develop officers who are exceptionally well-educated in the science and engineering disciplines associated with Integrated Air and Missile Defense (IAMD). The students asked Hill about the future of the MDA, evolving threats, and how officers can be more technically prepared to fulfill missile defense roles.

U.S. Navy Lt. James Kornowski, for example, asked about the most significant future challenge to the Missile Defense Agency and its mission.

Hill swiftly replied, “It’s the continuously evolving threat. Nothing is static. The threats that were present early in my career have evolved and continue to evolve.”

Referencing the CNO NAVPLAN 2021, U.S. Navy Cmdr. Doug Jones asked, “In your opinion and from the MDA perspective, what transformation within the Naval Education Enterprise is required in order to compete, deter and win in the future?”

Hill addressed the complexities that are involved with that answer … “We need to know how these systems work so that we can adequately employ them. I think that is the key thinking that will drive reform in education because it is becoming more technical and more connected and that means it’s also more challenging."

Recognizing the role NPS played in his own career trajectory, Hill said that graduate education and research opportunities for DOD officers are paramount. From his own experience, it wasn’t about the direct application of the physics concepts he learned. Rather, it was about the development of his own analytical mind, and being able to break down complex problems.

For the development of that skillset, he said, “NPS is one of the most important institutions on the planet.”