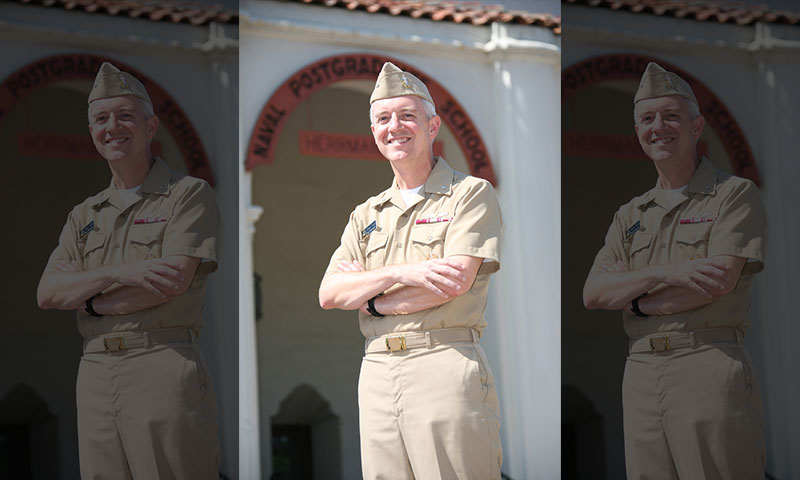 Retired Rear Adm. and NPS graduate Dr. David Titley, pictured during a campus visit while serving as Oceanographer of the Navy, now applies his educational and Navy career experiences leading the National Oceanic and Atmospheric Administration (NOAA) as Deputy Under Secretary for Operations.

When NPS alumnus and current Deputy Under Secretary for Operations at the National Oceanic and Atmospheric Administration (NOAA), Dr. David Titley, likens the structure of his organization to that of a “small scale version” of the U.S. Navy, he is referring to one of the lesser-known dimensions of the Department of Commerce branch.

NOAA oversees a fleet of 19 ships, almost a dozen aircraft, and is one of the United States’ seven uniformed services – the NOAA Commissioned Officer Corps. Several NOAA officers walk the halls of his own alma mater, the Naval Postgraduate School, each year, pursuing the academic opportunities that Titley himself champions today.

But NOAA also oversees the National Weather Service (NWS), an operation that is critical to American security as evident with the recent landfall of Hurricane Sandy across the eastern seaboard, and the subsequent devastation that occurred throughout the nation’s most densely populated region.

In times of critical decision-making, Titley, a retired Rear Admiral, says his background in advanced education and Navy leadership experience provide the foundation for making the difficult decisions that leaders must make.

“There are not a whole lot of active duty military officers, and even fewer flag officers, who have Ph.D.s, so I’m often asked why the Navy invested in my degree,” explained Titley. “The way I look at it, training teaches you for the present, but education teaches you how to think about the future. And it’s not only thinking abut the future, but thinking about problems that, when you were in postgraduate school, you didn’t even know were going to be of interest to the Navy.”

Titley, a 32-year Navy veteran who assumed his position as chief operating officer of NOAA in June of this year, earned his master’s degree in meteorology and physical oceanography, and a doctorate degree in meteorology from NPS. His dissertation research was focused on the rapid intensification of tropical cyclones, which have proven dangerous for civilian populations as well as the Navy’s maritime operations – and were no more evident than with Sandy’s power surge.

He says there have been many moments throughout his career when his advanced education paid significant dividends. He points to 2009, when he became the Navy’s oceanographer and navigator, and was assigned as director of the Task Force Climate Change by then Chief of Naval Operations Adm. Gary Roughead.

“Probably the place where I most used my Ph.D. in the Navy was in the Arctic when Adm. Roughead asked me to stand up and lead the Task Force Climate Change. It was really taking a look at a lot of different information, trying to put it together in a way that would make sense for senior decision makers,” explained Titley, “and we really looked at everything from science to policy to operations. And the fact that I had a Ph.D. and that it had come from the Naval Postgraduate School really helped me in learning how to think through that problem.”

Since assuming his current position, Titley has relied upon his Navy leadership experience and his academic background to help assess the future operational needs for the organization charged with oceanographic and meteorological research and planning. The NOAA Corp, with over 300 commissioned officers, is just one dimension of the administration that also serves as home to the NWS, a large research office, and a number of branches dedicated to furthering atmospheric and maritime planning and operations – from issuing storm warnings to overseeing fisheries. One of the focal points of Titley’s tenure prior to Sandy’s development was in examining the current state of his organization.

“Right now, as the Deputy Under Secretary for Operations, I’m really just working out some real basic things. In fact, to borrow from Adm. John Harvey, I’ll say ‘Brilliant at the Basics,’ because I think it can apply to NOAA,” said Titley. “It’s important to look at how we manage our IT, how we do our hiring of civilian personnel, how we do our acquisition, how we do our financial management, and how we just do the business of NOAA. All of those things, I’m just taking a hard look at and seeing where there are opportunities for improvement.”

With such a wide-reaching research mission, Titley sees the NOAA operations as necessary to keep the U.S. a step ahead of the challenges of the future – one of growing concern is climate change. He noted the Arctic has seen a dramatic decrease in multi-year ice, which had previously prevented ships from passing through the region. Today, leaders are beginning to ask the logistical questions about an area that may soon see more traffic from tourism, commerce and resource exploitation.

“What we see in climate change, I think of it really as no more or no less than the physical battle space in which our Navy has to operate everyday,” explained Titley. “And when directed by the national security, they be required to fight and win in that battle space. So just as we plan for changes in policy, changes in economics, and changes in demographics, the U.S. security establishment, and the Navy in particular, should also plan for when our physical environment is going to change. And that really, to me, is the link between the national security and the physical science of climate.”

Having served both Navy and civilian meteorological and oceanographic institutions, Titley understands the value of the two coming together in collaboration. In looking to the future, he expressed hope that NOAA will continue to find new opportunities to share expertise and ideas with partners in the scientific community.

“I think that collaboration is important, and it certainly continues to improve. And it really extends from strategic all the way down to tactical. At the strategic level, we work very closely with the Navy on the Ocean and Atmosphere Prediction System, because at the end of the day, we share a battle space.”

Titley hopes to see partnerships between NPS and NOAA extended as well, and beyond the university’s meteorology and oceanography departments, drawing on the expertise and research within fields like operations research.

“I think there is an opportunity for collaboration with NPS and the great mixture it has beyond the meteorology and oceanography departments,” Titley explained. “Some of what we do requires people with skillsets different that oceanographers or meteorologists. It requires skillsets such as operations research or operations analysis, among others. So I see this as not only collaboration with the institutional departments we have worked with previously, but reaching across departmental lines to reach those that may not have participated yet.