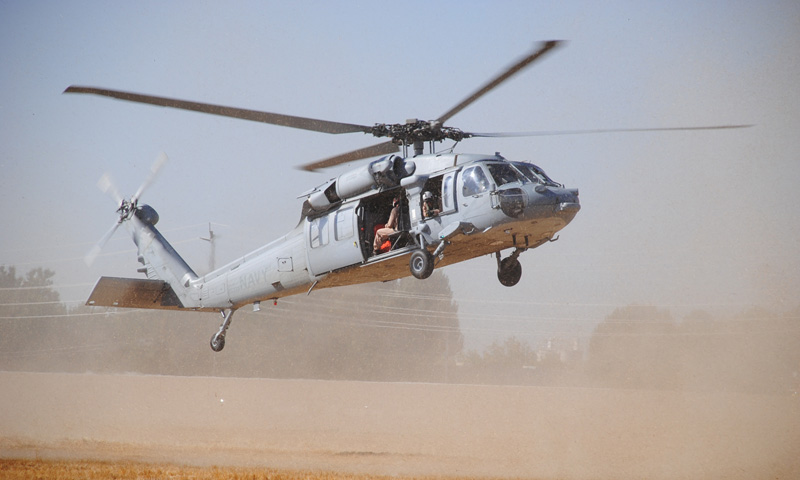 An MH-60S Seahawk helicopter from NAS Lemoore's SAR unit lands in a field during an aircraft mishap exercise Oct. 18 in Visalia, Calif.

The whir of the Sikorsky MH-60S Seahawk at Naval Air Station (NAS) Lemoore is a welcomed one, as a new search and rescue (SAR) unit has geared up to begin operations and support open water training for the base’s 16 strike fighter squadrons. For NPS alumnus and NAS Lemoore N5 Strategy and Future Requirements, Russell Biros, that sound has been a long time coming.

What began as an issue of concern for Biros during his time as a reservist led to his NPS Executive Master of Business Administration (EMBA) capstone project, and ultimately, a permanent civilian position dedicated to seeing the SAR unit through to completion.

“I am very grateful I was able to help with the return of SAR to NAS Lemoore. Base leadership was extremely generous when they offered me the opportunity to attend the Naval Postgraduate School’s EMBA program. As such, it was important to me that our work resulted in the return of the SAR capability that base leadership desired.”

The previous SAR unit had been operational at NAS Lemoore for 41 years before being deactivated in 2004. The need for search and rescue capabilities in the area was outweighed by the unit’s high operating costs, an issue tackled by Biros and his peers in their capstone project.

Biros was first made aware of the need for a SAR unit when he served at the F/A-18 Hornet Wing, Commander, Strike Fighter Wing Pacific, where leadership had expressed concern for the slow response times of neighboring rescue resources in the event of a training accident.

Since budget cuts were a factor in the deactivation of the original SAR unit, it seemed fitting to Biros that the answer to the problem might lie in further exploring the resources and management of such expensive capabilities. When his wing commodore offered him the opportunity to attend NPS’ EMBA distance learning program, both agreed the SAR issue was worth further exploration from the resource management perspective.

“The important thing about the EMBA program is the students don’t have to wait to take their education out into the fleet when they graduate,” noted EMBA Program Manager and Lecturer, retired Navy Cmdr. William Hatch. “They are living in the fleet. Our students in this program are embedded in the fleet stateside,” explained Hatch.

“They leave the classroom on any given day and take what they just learned into the office. They don’t have to wait until they graduate. For the 24 months that they are in the program, they inject every course immediately into the fleet,” he added.

“Our capstone was a presentation of the facts regarding the two SAR efforts that occurred after Lemoore lost its organic SAR unit in 2004,” Biros explained. “Both events occurred in the offshore warning areas that wing squadrons used for training. Unfortunately, in both of these incidents, the pilots did not survive. But the SAR response time was so poor that had there been survivors in the water, they would have died due to extended immersion in the cold waters of the Pacific.

“The poor response times from the closest SAR agencies, the cold waters of the Pacific, and the resulting fact that this training airspace went highly underutilized due to a lack of nearby SAR assets, were all presented in our project,” he added.

Upon the completion of their capstone, the group’s findings were presented to decision makers within Commander, Naval Air Forces, and Biros was hired on as a civilian at Lemoore to continue to push the project through to completion. The resulting unit of 30 active duty sailors, 40 civilian contractors and three helicopters, as well as the capability to conduct remote operations out of the Marina Municipal Airport, placing SAR duty crews closer to the open ocean training areas, is lined up to begin operations.

Graduate School of Business and Public Policy Dean, Dr. Bill Gates, reiterated the value of applied research, noting that it is at the core of all student capstone projects through the EMBA program.

“Biros’ project illustrates the exceptional value provided by our EMBA program. Our students receive a fully-accredited, government-sponsored EMBA. In return, our students complete capstone projects addressing current problems facing the organizations in which they work. Feedback from the ‘clients’ accepting the students’ capstone projects indicate that the students’ work has more than offset the Navy’s cost to sponsor the program.”

“What has stood out to me,” added Biros, “is how many moving parts had to be pulled together to make this happen. We were very grateful that the project went such a long way to actually re-establishing the unit. And NPS was very instrumental to the setup … I think that’s the highest thing I can say to any kind of curriculum – we actually took what we learned and were able to apply it to create something tangible.”