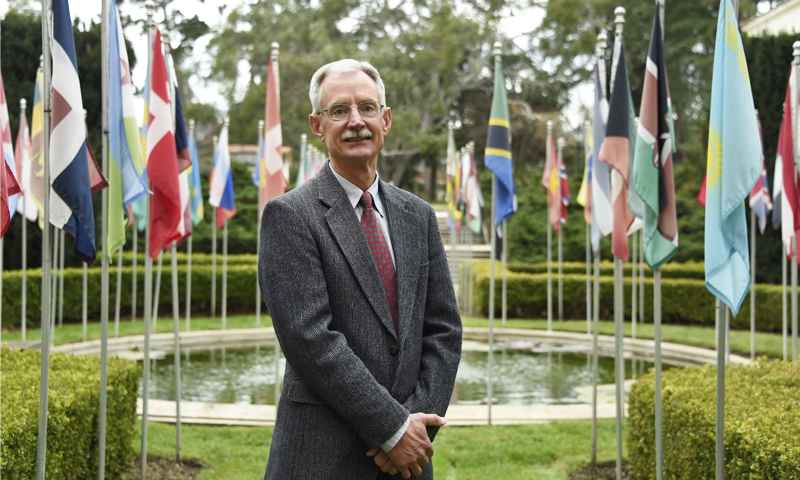 NPS alumnus and retired Navy Capt. Al Scott, pictured in the International Flag Garden, Jan. 8, has some big shoes to fill as he transitions into his new role on campus as Executive Director of the International Graduate Programs Office (IGPO). Scott replaces retired Marine Corps Col. Gary Roser, who retired from his civilian NPS career following 23 years of service to the university.

"Col. Roser and the amazing IGPO staff have done a phenomenal job over the years," said Scott. "My immediate goal is to sustain the great program they have established and to continue to enroll high quality and diverse international students."

Scott is no stranger to NPS. He became an Aerospace Engineering Duty Officer (AEDO) after receiving his Master of Science in Astronautical Engineering from the university in 1996. In 2005, he returned to NPS where he completed his final active duty tour as a program officer, followed by a transition into the classroom as a lecturer with the Space Systems Academic Group.

"[IGPO] is responsible for the cultural, social and academic integration of international military students and their families, and for making sure they are well taken care of," said Scott. "The education and exposure these students receive is invaluable to their countries and military services, and also strengthens U.S. international relations."