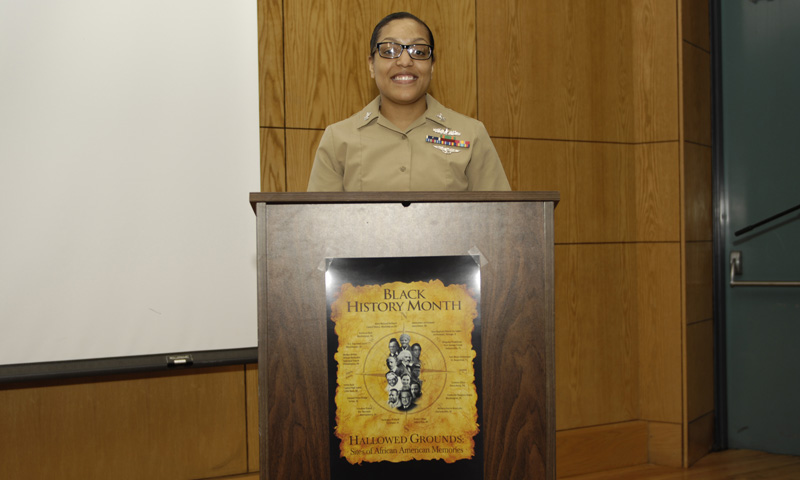 Yeoman 2nd Class Ana Ingram leads a discussion on the significance of Black History Month to NPS students, faculty and staff in the Mechanical and Aerospace Engineering Auditorium, Feb. 18. Sponsored by the NPS Heritage Committee, the event provides the campus community with an opportunity to commemorate the diverse culture of the United States and our military.

Master of Ceremonies, Mass Communication Specialist 1st Class Lewis Hunsaker described the history of this event, which began as an observation of "Negro History Week" in 1926.

"The observation began as an initiative led by historian Carter G. Woodson to recognize the contributions of African Americans to our country, and to foster a better understanding of the African American experience," said Hunsaker. "He chose the second week of February to coincide with the birthdays of abolitionist Frederick Douglass and President Abraham Lincoln, two people who had a dramatic effect on the lives of African Americans."

The observation was expanded to include the entire month of February in 1976, and has since become commonly referred to as Black History Month or African American History Month.

"Not only is this month meant to commemorate my ancestors, it is to recognize the current African American leaders who so admirably are still reaching new heights and new depths that we thought we would never see because of the color of our skin," said Ingram. "Although we have come a long way from the way things used to be, I think it is important to not so willingly forget our past because America has changed … We embrace our history and preserve our culture to emanate in a progressive future of intellectual growth, wise decisions, and momentous movements."