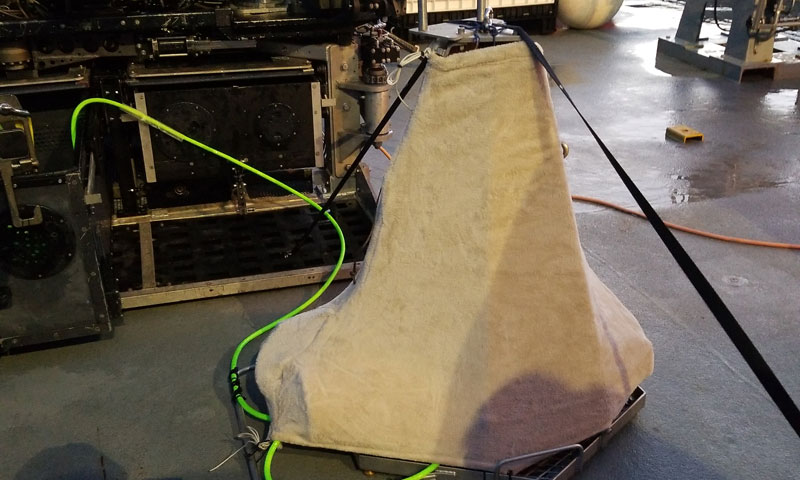 Covered in a fleece blanket serving as a flow shield, an underwater acoustic vector sensor sits on the deck of a research vessel awaiting deployment in the Monterey Bay in early 2019. The next-generation technology has the capability to provide accurate directionality for tracking a range of targets, from merchant vessels to hostile submarines to marine mammals.

A team of Naval Postgraduate School (NPS) researchers is partnering with local research institutions to explore some of the latest technology in acoustics sensors, investigating a challenge the Navy has struggled with for generations.

NPS Department of Physics Chair Kevin B. Smith, along with Research Associate Paul Leary and Department of Oceanography Research Associate John Joseph are leading a team of researchers to test the next-generation of acoustic vector sensors with the capability to provide accurate directionality for tracking a range of targets, from merchant vessels to hostile submarines to marine mammals.

“Acoustic vector sensors are the latest technology for underwater detection,” Smith noted. “Unlike traditional towed arrays, a single sensor package has the capability to provide bearing estimates [or directionality] in order to better detect, classify or track a signal of interest.

“A single sensor system can say ‘yes, we heard that and it’s coming from that direction,’ so we don’t need a big array anymore to obtain estimates of the bearing,” he added.

Historically, underwater detection has been a bulky and ambiguous endeavor dating back to the first World War, when Navy physicist Harvey Hayes first developed his “Electric Eel” to detect the presence of a submarine up to a whopping two kilometer distance.

Technology truly burgeoned in the early 1960s as the Navy developed a range of sophisticated towed array systems to take on growing Soviet submarine threats throughout the Cold War. Yet many of these systems were handicapped by one serious drawback: as sound waves traversed the water and passed along an array, hydrophones - underwater microphones - could estimate target bearing, but usually with ambiguity in directionality.

“Because the towed arrays are symmetrical, all you are measuring is time difference of arrival along the array,” Smith explained. “You don’t know if something’s coming from 45 degrees that way or 45 degrees the other, whether it’s to port or starboard. You have to maneuver to resolve this ‘left-right ambiguity’, and that takes time.”

Acoustic vector sensors eliminate this ambiguity. Not only do they measure pressure changes in the sound waves as traditional sensors do, but orthogonal accelerometers are able to discern minute changes in the movement of the water itself to directly provide a specific measure of bearing.

This technology is not necessarily new, but size matters when it comes to operational relevance. Over the past few years, enormous strides have been made in vector sensor research, yet devices have tended to be too unwieldy in an environment increasingly defined by speed, size and autonomy.

“The Navy has put directional sensors on submarines before, but they tend to be sort of bigger kinds of things,” Smith said. “Improvements in technology have been made to reduce the size, reduce the frequency response and still get good directionality from the sensors; this has really helped the applications take off over the last 10 years.”

Towed arrays outfitted with vector sensors may operate at significantly improved efficiency and accuracy without needing to maneuver a vessel.  Tiny sensors may now conceivably be swiftly dipped into the water by a hovering drone, and/or unmanned underwater vehicles (UUVs) may efficiently establish impromptu distributed sensor networks for sensing and tracking or communications.

“A lot of people around the country and around the world are starting to look at this technology and figure it out,” Smith observed. “We can learn a lot from this research in how better to detect, classify or track something, even if it’s marine mammals being detected where the Navy has an ongoing exercise.”

Identifying and tracking marine life is what brought the nearby Monterey Bay Aquarium Research Institute (MBARI) to the table.

Since 1987, the private non-profit oceanographic research center has been a driving global force in bringing technology to bear on important questions in ocean science. Tracking marine migration patterns is an important part of this, and MBARI agreed to host NPS at no cost through a no-cost Cooperative Research and Development Agreement (CRADA) to help refine the technology.

It was MBARI’s research vessel, the Rachel Carson, that helped Smith and the research team deploy the device near the Monterey Bay canyon, one of the largest underwater canyons in the world. With the assistance of a Remotely Operated Vehicle (ROV), the team lowered the unit 891 meters below the surface and connected it to MBARI’s Monterey Accelerated Research System (MARS).

A project managed by MBARI engineer Craig Dawe, MARS is a cabled junction box on the seafloor, capable of providing power and Ethernet to underwater sensors. Originally deployed in 2008 as the first deep-sea cabled observatory offshore the continental U.S., MARS has been supplying NPS continuous data, and should continue doing so for many months before maintenance is required.

“We can use this stationary observatory to detect and track short-range surface craft and possibly submerged vessels,”  explained Navy Lt. Benjamin Carpenter, one of Smith’s graduate students that worked on the project to explore its use in mobile systems.

Recording in 30-minute chunks on its resident computer, the acoustic vector sensor system streams its data to a server at NPS, where the research team, including naval officer graduate students, analyze it.

The majority of data, however, has been biological.

“It’s almost nonstop humpback calls!” Smith exclaimed. “The whales are just nice and vocal and always chattering. That was MBARI’s interest in working with us: when they put a hydrophone down, they could hear lots of whales, but they didn’t know from what direction.”

“This capability changes that,” he added.  NPS is now providing processed directional data in frequency bands of interest to MBARI researchers to support their studies of marine mammal migrations.  Dr. John Ryan, a Senior Research Specialist at MBARI, has recently been able to compare these acoustic results with data collected from sensors placed on blue whales by Dr. Jeremy Goldbogen’s group at Stanford/Hopkins Marine Station.  The results are extremely promising (see figures) and suggest that the NPS directional sensor will be able to provide accurate estimates of bearing for a multitude of vocalizing marine mammals passing through the Monterey Bay.

Looking forward, Smith noted there is still much work to do: ensuring processing streams continue to function satisfactorily, making sure algorithms work properly, expanding the sophistication and reach of the sensors, and automating various aspects of the system. Eventually, the research team hopes to use a plurality of sensors to be able to actually identify the location of a target, which would provide a whole new level of capabilities.

In the process, NPS is establishing regional partnerships with other researchers at local institutions and industrial partners, in support of the Naval Postgraduate School’s strategic plan.  3D soundscapes, seasonal variations in ambient sound, geoseismic activity, and other features that can be observed acoustically are providing new insight into activity in the Monterey Bay environment.

“NPS provides the environment where naval officers can be exposed to and actually work with this technology,” he said. “How good is it? What can we get out of it? What can we do with it? We can learn so much from this research, including tracking the migration patterns of marine mammals and beyond.”