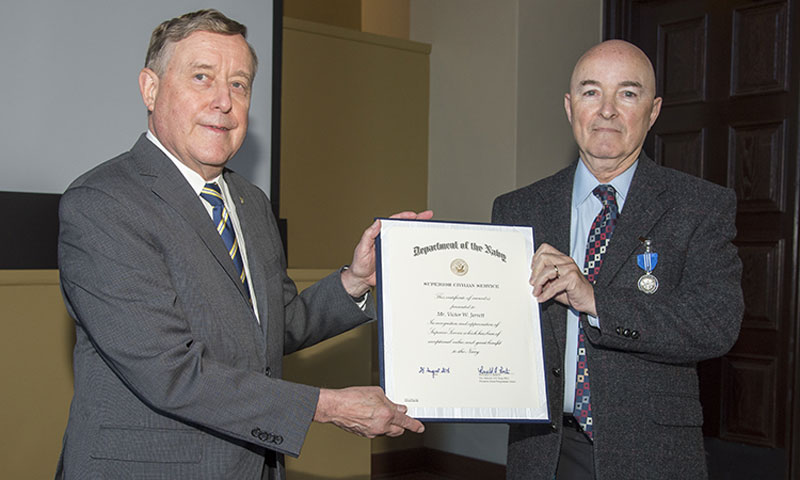 “As many of you know, Vic is leaving government service after 40 years,” said Route. “As a former Naval IG myself, and having seen many of the echelon two level IG organizations across the country, this one is by far the best. I am so pleased he was able to put this together and assemble such a great team.”

During his time at NPS, Jarrett established the university’s Office of the Inspector General, focusing his efforts along four distinct lines of effort – serving as an external liaison, preparing the institution for inspections, providing an exemplary IG hotline, and coordinating the Manager's Internal Control Program.

Jarrett has been highly respected on campus for his keen expertise in understanding risk management, and his systematic approach to self-assessment.

“I would like to thank Adm. Route for the great support he has given me over the past five years,” said Jarrett upon accepting the award. “I would like to also thank the IG staff who have done such a great job for NPS in the past several years ... the key part of my job was mainly in making good hiring decisions.

“I would also like to thank the faculty and staff who, in my opinion, make the magic happen for NPS and our students,” he continued. “It’s been a pleasure and an honor to see that first-hand during my one-on-one interview sessions ... I get excited hearing the wonderful things that we’re doing for our students and the Navy.”