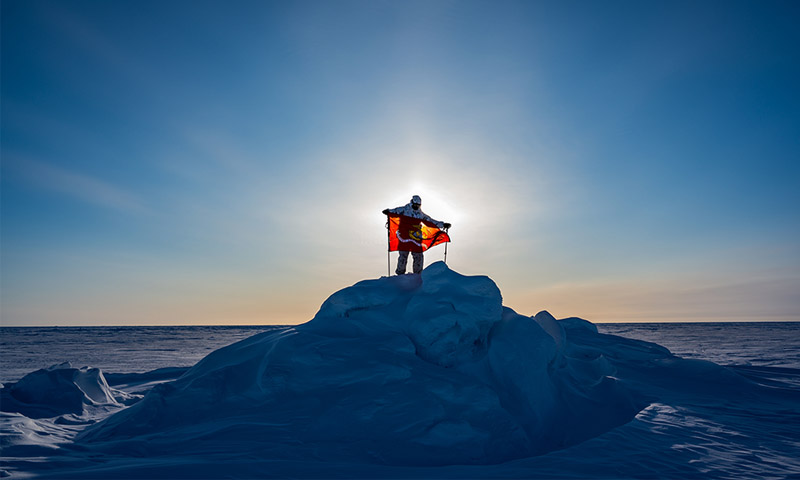 The Navy’s Arctic blueprint, released in early 2021, continues to demonstrate the strategic importance of the region. With deep expertise in the Arctic, NPS researchers are making critical discoveries about the region, and challenging longtime assumptions including those about life blooming beneath the ice.

For the longest time, scientists have written off there being much life below the Arctic sea ice. Surely not enough sunlight would be able to get through the snow and ice to sustain an abundance of life. Additionally, satellites can’t see through the ice, and it was difficult for scientists interested in investigating this further to get out to the Arctic during the winter and spring – when the percent of Arctic ocean iced over was the highest – because most Arctic expeditions wait until there’s thinner ice so icebreakers can move through.

According to the Department of the Navy’s recently-published Arctic Strategy, “Progress is not possible without pushing the boundaries of science and technology.” And an innovative research effort funded by the National Science Foundation and U.S. Dept. of Energy, led by researchers at the Naval Postgraduate School (NPS), is definitely pushing the boundaries of those long-held assumptions about just how much life is under the Arctic ice.

Researchers at NPS have a long history of innovative research in the Arctic and Antarctic regions. University faculty were direct contributors to the Navy’s Arctic Road Map released in 2014, students are frequent participants in the Navy’s ICEX exercise, and several faculty have partnered with the Office of Naval Research on a wide range of research projects.

Employing innovation and advanced computer modeling techniques, an NPS research team led by Oceanography Professors Jaclyn Clement Kinney and Wieslaw Maslowski modeled Arctic under-ice primary production from 1980 to 2018. The results of their effort showed a greater abundance of life under Arctic ice than previously thought, mostly in the form of single-cell plants (or phytoplankton) called diatoms. Their findings were published in the Journal of Geophysical Research - Oceans in August 2020.

The team, including NPS professor Younjoo Lee, former NPS post-doc Marina Frants, and several outside collaborators, modeled what is most likely under the ice bio-physical environment. They then compared their model’s results with actual data provided by the few excursions who did get samples. (Scientists estimate phytoplankton based on the level of chlorophyll-a in the water.)

“It’s really quite a simple idea and sometimes, I think, the best science ideas are simple and straightforward,” Kinney says.

The idea might have been simple, but the implementation was anything but. It took a multi-institutional team and years of research time to develop, evaluate and tune the model, the Regional Arctic System Model (RASM). RASM has been designed and used to simulate “the physical and biogeochemical environments at high-resolution over multi-decadal time scales,” according to Maslowski.

Among its many applications, the model has been used to replicate phytoplankton blooms under the ice, and how these blooms have changed seasonally and interannually. Such a research program required large allotments of high-performance computing resources, which were competitively secured through the DOD’s High-Performance Computing Modernization Program (HPCMP).

Their model’s results matched well with limited data collected in different parts of the Arctic … There is more life tingling under the ice than previously thought. The study found the majority of Arctic pelagic primary production takes place in areas at least half covered with ice. Unsurprisingly, the plankton population is at its peak during the summer when the Arctic experiences the most sunlight and nutrients are still abundant.

The model also found that under-ice primary productivity has increased over the past decades. Kinney concludes this is most likely the result of an increase in the photosynthetically active radiation in the water driven by changes in surface reflectivity from the thinning ice and melting of snow on the ice.

Scientists are also interested in the bountifulness of these microscopic plants because ocean phytoplankton are the base of the food chain and make up about half of the Earth’s natural carbon drawdown (how much carbon dioxide the planet can store).

“We need to understand the rate of carbon uptake and its total budget in the Arctic to diagnose its change and trends, as well as its contribution to and impact on global warming,” Maslowski explains.

The team hopes this research could lead to more predictive capabilities into the Arctic’s biogeochemical and physical environments, including prediction of snow and sea ice melt and open water phytoplankton blooms.