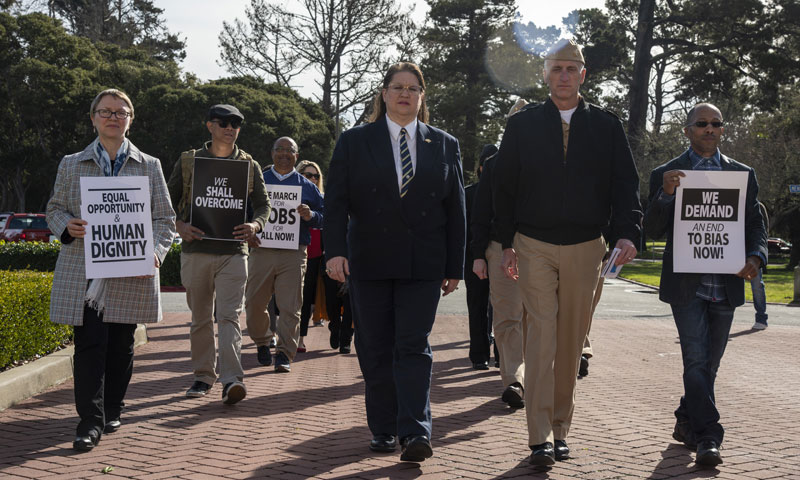 Students, faculty and staff from NPS participated in a ceremonial march around the flag pole in front of Herrmann Hall in remembrance of Dr. Martin Luther King Jr., Jan. 17. Following the march, participants gathered to listen to guest speakers and a reading of King’s famous “I Have a Dream” speech to honor his impact on furthering civil rights.

“Dr. Martin Luther King Jr. speaks about equal rights not just for people of color, but for all people and to be a positive voice to everyone in a nonviolent manner,” said Sheridan Stephens, chairperson of the NPS Heritage Committee. “He encouraged his followers to participate in peaceful protests when the situation became heated by others, remain steadfast in their principals, and to have courage and faith.

Education was a point of emphasis that King often mentioned in his speeches. Stevens pointed out that King’s famous speech is still very much alive within NPS.

“NPS allows for the dreaming of new theories from its students and professors, which keeps alive Dr. King’s dream by bettering ourselves through education,” she continued.

“When you look at Dr. Martin Luther King Jr., he was the equivalent of a great general in a hundreds of years long campaign for civil rights that started back even before the American revolutionary timeframe with slavery,” said Old.

“There is a reason we have this day,” continued Old. “It’s because King was one of the greatest leaders America has ever had. He dedicated his life to a mission, and that mission was equality.”

The remembrance helped all in attendance reflect on King’s struggles and the great strides he made toward civil equality, as well as the work still to be done.

Old concluded his remarks with a call to action for everyone to continue King’s work toward equality stating that “it’s up to all of us to continue his work, and eventually we will fulfill his legacy.”