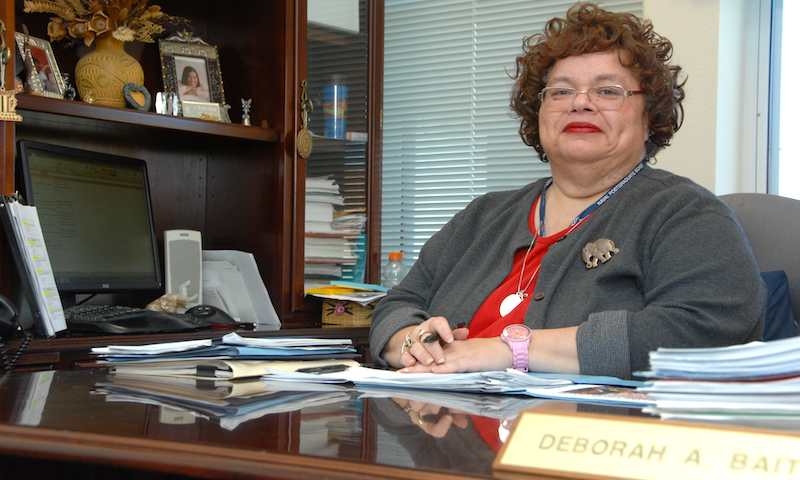 The NPS community was saddened to learn of the passing of long-time Deputy Equal Employment Opportunity (EEO) Officer Deborah "Debbie" Baity, June 9. Baity served at NPS for almost 34 years where she was a beloved member of the community.

"Debbie's warm and easy demeanor made everyone that came into contact with her feel welcomed and special. She will truly be missed. Please keep the Baity family, and her colleagues in the Human Resources Office, and across campus, in your thoughts and prayers during this difficult time," said NPS President retired Vice Adm. Ronald A. Route.

Debbie began her federal career in 1979 and served in various capacities for almost 37 years. She joined NPS in 1982 as a clerk-typist but began her distinguished career in the Human Resources Office in 1983.

"In her approximately 34 years of service at NPS, Debbie worked tirelessly in pursuit of establishing NPS as a model EEO program. She dedicated her life to championing diversity, equality and mutual respect for each other. She was passionate about her job and compassionate with people. We already miss her and will honor her legacy by continuing her efforts," said Human Resources Director Ermelinda Rodriguez-Heffner.

Equal Employment Opportunity Specialist Kelli Kennedy first met Baity after being "thrown into" NPS' Command Management Equal Opportunity Manager position. After completing her military service, she returned to NPS and was hired to work with Baity in the EEO office.

"She was a kind and patient woman. She gave me my chance," said Kennedy. "I worked very closely with her on the 2014 Command Climate Survey where I attended some 25 meetings with Debbie. When this job came open, she selected me and gave me my start here."

Former Human Resources Specialist Dawn Diaz met Baity just one year after Baity started working at NPS. Their friendship, both on and off base, spanned two decades. Diaz even served as Baity's babysitter on more than one occasion.

"She always had time for whomever stopped by her office and always had a kind word for them. She would stop whatever she was doing, and let whomever get whatever it was that was bothering them off their chest. She always made time for everyone," said Diaz.

A memorial service will be held in Baity's honor at Seaside's Greater Victory Temple Church at 1:00 p.m., June 18. In lieu of flowers, donations can be made to the Alpha Kappa Alpha Sorority, Inc. (Seaside Chapter) in Baity's name.