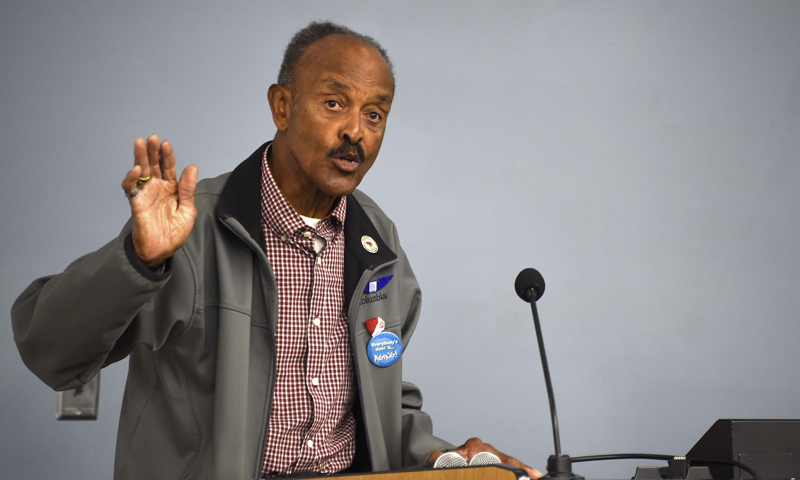 Retired U.S. Army 1st Sgt. Hugh "Smitty" Smith, Sr. reflects on the many milestones of his 27-year career during NPS' Black History Month celebration in Glasgow Hall, Feb. 26. Black History Month is an annual observance by the United States, and serves as a remembrance of important people and events in the history of the African American people.

"I must say, it's an honor and a privilege to be here," said Smith. "To see your smiling faces and the way you all look at me turns back the clock to my days in the Army … [If] it wasn't for people like you, I wouldn't be here today."

Smith proceeded to tell his story, covering milestones in his personal life and military career. These stories included his involvement in the student-led strike against segregation at Robert Russa Moton High School in Farmville, Virginia in 1951. The case would prove to play a significant role in the fight to end segregation in the schools of America, as it was the only student-initiated lawsuit to be rolled into Brown vs. the Board of Education.

"The Caucasians had their school and we had our school … So many of my friends weren't allowed to attend my school, they had segregated us," said Smith. "But we did one thing precisely, we communicated … we communicated as a group and over came it," he said.

The event was organized by NPS' Multicultural Heritage Committee, charged with helping the NPS community observe the diverse cultures and backgrounds of today's military.