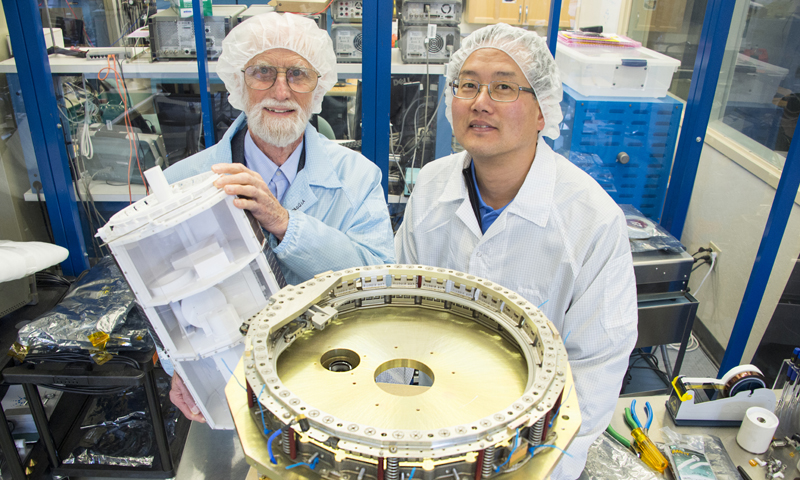 Space Systems Academic Group Chair Dr. Rudy Panholzer, left, and Research Associate Dan Sakoda stand near one of several structural pieces to NPSAT1 in the university’s clean room in Bullard Hall, Jan. 11. The satellite is the product of years of student and faculty research and will carry several experiments from both NPS and the Naval Research Laboratory into orbit when it launches later this year.

Students and faculty at the Naval Postgraduate School’s (NPS) Space Systems Academic Group (SSAG) are tentatively scheduled to launch a 3-foot, 180-pound satellite dubbed NPSAT 1, as part of the next DOD Space Test Program (STP) mission onboard a SpaceX Falcon Heavy rocket from the Cape Canaveral Space Center, Sept. 15, 2016. The satellite is the product of years of student and faculty research and will carry several experiments from both NPS and the Naval Research Laboratory into orbit.

The primary motivation behind the building of NPSAT1 was education. Some 40 theses and many hours of student and faculty research contributed to the development of the satellite.

“We are not here to build satellites, but the satellite is a nice byproduct of the educational process … We designed it, built it and are testing it in house. We also developed the lab around it, and developed the curriculum that led to its completion,” said SSAG Chair Dr. Rudy Panholzer, a 52-year veteran of the university who has been helping guide students through the many theses that culminated in NPSAT1 since the program’s inception.

A key component to any mission in space is the advancement of science, and NPSAT1 provides university students and faculty with a unique platform on which they can conduct science and engineering experiments.

“Once in space, you get a lab in the sky and are able to pilot it. [Our students] can point up into space and say ‘my work is up there,’” noted Panholzer.

“We are educating students, so why not choose an educational vehicle?” added NPS Research Associate Daniel Sakoda. And while Sakoda and Panholzer could have contracted out the building of the satellite, they and their colleagues chose to build it themselves in NPS’ Small Satellite Lab.

“It is very important that students realize that engineering is not just about Power Point [documents] and white boards,” said Panholzer. “That stuff may work in the classroom, but it does not necessarily work in the real world.”

“It’s all about space systems engineering, students can see how all of these components work together … That’s why a systems approach is necessary,” said Sakoda.

“That’s why we aren’t a department, but an academic group. We’re a hub that draws from disciplines all across the campus,” added Panholzer.

NPSAT1 is being launched in conjunction with the Department of Defense’s Space Test Program (STP), which maintains a list of experiments to be launched into space. Researchers can apply to have their experiments incorporated into future launches in keeping with the STP charter, which calls for the organization to get as many experiments into space as possible.

“It is important to get on the list because they will launch when a spot becomes available,” said Panholzer.

And while the development of NPSAT1 is quite an accomplishment, it will not be the first NPS-developed satellite launched into orbit. According to Panholzer, former astronaut Senator John Glenn launched NPS’ first satellite, the Petite Amateur Navy Satellite (PANSAT), from the Space Shuttle Discovery in 1998.

Graduate students from across the services and from varied backgrounds study under Panholzer at SSAG, and many of those who have contributed to NPSAT1 over the years have gone on to leadership positions within the DOD’s space and acquisition communities. According to Sakoda, what they learn at NPS will be valuable to them as they interact with the defense contractors that build satellites used by the Department of Defense.

U.S. Army Lt. Col. Thomas Pugsley is an SSAG graduate. He first came to NPS as an Army Space Systems Operations officer in 2005. After a series of increasingly difficult directed studies under current Acting NPS Provost and SSAG Professor Dr. Jim Newman, Pugsley went to work on a thesis that explored the use of Micro-Electro-Mechanical Systems (MEMS) aboard satellites –  the NPS Small Satellite Laboratory and NPS SAT1 were his classroom.

“Some of my fondest memories were from the time I spent sitting here in the lab solving problems,” said Pugsley. “The guys that I studied with then are still here and offer a vast knowledge base that students can draw from.”

After graduating from NPS in 2007, Pugsley “exported” his education to the U.S. Military Academy at West Point where he started the institution’s Small Satellite Research Center. Today, he is back at NPS where in addition to completing his doctoral studies he serves as a co-thesis advisor for SSAG students.

And while his current studies at NPS are not focused on Space Systems Engineering, Pugsley credits his work on NPSAT1 with creating a foundation of engineering expertise that has served him well throughout his career.

“Engineering by itself is just good problem solving … As much as any other engineering field, [Space Systems Engineering] gives you a lot of background experience and knowledge. It teaches you different methods and approaches for solving problems,” said Pugsley.

And had it not been for the problems that Pugsley solved on NPSAT1, it is likely that the satellite would look very different. Pugsley’s work with MEMs led to the replacement of several bulky satellite components with very small MEM sensors.

“When it comes to spacecraft, mass is everything … Rather than having big bulky, mechanical sensors, we started asking ourselves, ‘what can we use that is smaller and lighter?” Pugsley recalled.

At that time, MEMs were fairly new to the space industry and there were questions about their accuracy and ability to operate in the cold vacuum of space. Pugsley went to work, spending hours in NPS’ vacuum chamber, building wiring harnesses and testing his minute components at very low temperatures.

All of that hard work may soon pay off. If all goes well, this coming September, Pugsley will be one of those students Panholzer hopes to see pointing into the sky, saying “my work is there.”