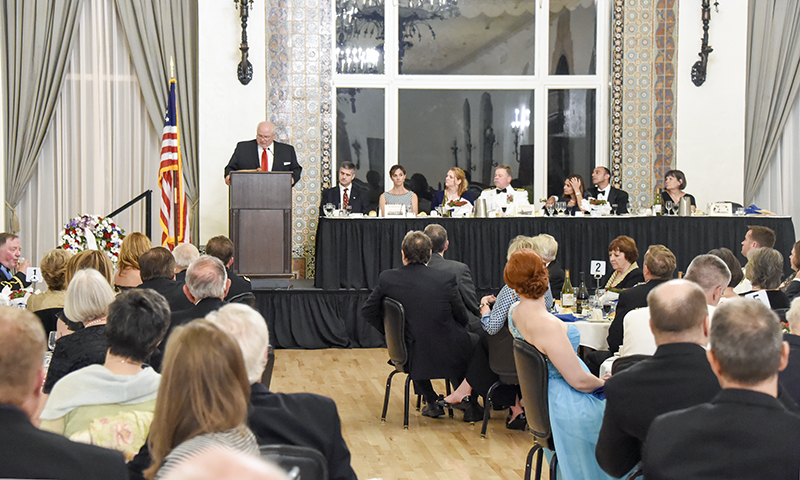 Naval War College Monterey Professor Dr. Jonathan Czarnecki shares his tenets of leadership during this year's Battle of Midway dinner in the Barbara McNitt Ballroom, June 4. Czarnecki delved into a controversy during the early years of WWII, and the extraordinary leadership required to correct and overcome the scandal.

"Our torpedoes, described as major ship killers, simply did not work as advertised for the first few years of the war, with a dud rate exceeding 70 percent … One of the true scandals for the U.S. Navy during WWII," said Czarnecki. "We know that at Midway we lost 44 out of 51 torpedo planes who didn't score a single hit. With one exception, all but one of the crews was lost."

Through a series of unauthorized testing on the torpedoes, four fatal flaws were discovered, Czarnecki explained. The depth gauges malfunctioned; the rudders jammed; a fragile firing pin would not detonate; and, the calibration of the magnetic exploders were conducted without consideration of which ocean they will be used in.

"Originally believed to be state of the art technology, it was after Adm. [Chester] Nimitz had empowered Commander of Submarines Pacific [Charles] Lockwood to conduct unauthorized tests of the weapons that we started to find out the problems," said Czarnecki.

"Wars are fought by people, not machines, and people use their minds," Czarnecki continued. "We will need not just good leadership, we will need extraordinary leadership, that is capable of adapting to situations rapidly and successfully. Good is no longer good enough in the complex uncertain environments in which we perform our duties."

Czarnecki served in military for 27 years, retiring at the rank of colonel, and has taught for more than 16 years. He concluded his presentation with the three tenets of leadership that allowed Nimitz and Lockwood to overcome their challenges during the early years of WWII.

"First, be creative, visionary and ruthlessly, results-oriented leaders. Practice learning, adaptation and imagination on a daily basis just as you do your [physical training]," he said. "Second, if you can't be an extraordinary leader, have the grace and honor to leave this profession and find yourself your rightful niche in this wonderful life and have a good one … And third, in either case, develop, sustain and improve upon the trust and loyalty our Sailors and Marines cry for."