NPS, NSAM Hosts Dining Out to Honor Battle of Midway 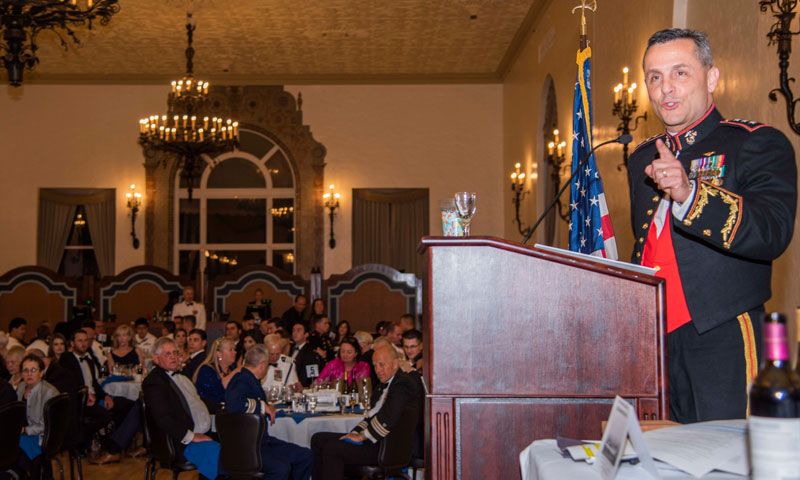 NPS, NSAM Hosts Dining Out to Honor Battle of Midway

“This really brings back so many memories,” said retired Capt. Maury Wortham, a World War II veteran who served as a dental officer on board a submarine that was in Tokyo Harbor during the surrendering of Japan. “This is a great way for me to remember the past because sometimes we can forget our history. I love getting out and meeting all the young Sailors because it lets me see the future of the military while remembering the past.”

Wortham was one of four World War II veterans that joined service members, retirees and their civilian guests in NPS’ Barbara McKnitt Ballroom to honor the 76th anniversary of the Battle of Midway, June 2.

Steeped in the traditions of the Naval Order of the United States, the dinner included toasts, trivia, singing and festivities headed by the president of the Mess, Capt. Rich Wiley, who presided over the festivities and introduced the keynote speaker, Deputy Commandant for Manpower and Reserve Affairs U.S. Marine Corps Lt. Gen Michael A. Rocco, who delivered remarks highlighting the event’s theme of honoring the part the Marine Corps played in the historic battle.

“The Battle of Midway is often told as a Naval Story, much like the attention given to the Marines for the Battle of Iwo Jima several years later. But in both instances, the full credit belongs to our full blue and green team,” said Rocco. “To talk about the Marine Corps and not mention our brothers and sisters in the Navy, or vice versa, is to tell a part of a history that has been intertwined from the earliest days of our naval service.”

Taking place from June 4-7, 1942 the Battle of Midway saw the sinking of four Japanese carriers causing devastating damage to the Japanese fleet that proved irreparable and paved the way for further U.S. victories throughout the war. The battle also included the presence of 1,400 Marines that Rocco says “proved every bit as worthy of the Eagle, Globe and Anchor.”

“When I think of the brave Sailors and Marines who fought at the Battle of Midway, a recurring thing that always comes up is that of decisive leadership,” said Rocco. “This leadership was showcased, and shown at every level strategically by Sailors and Marines at their battle stations who acted quickly and at many times without direction in the face of the onslaught from the Japanese both at sea and air.”

Rocco went on to highlight the noble actions of some of the Marines who served in the battle and their leadership, including Lt. Col. Harold Shannon who was the garrison commander of the Marine Force on Midway whose leadership lead to the successful fortification and defense of the island and his immediate promotion to colonel. Also mentioned was Capt. Richard Fleming who led a flight of dive bombers in an attack on the Japanese heavy-cruiser “Mikuma” in a brave attack that cost him his life.

“This ceremony really recognizes one of the turning points of World War II and it is absolutely humbling, especially meeting some of the individuals that were there and answered the call,” said Maj. Bobby Tuttle, Vice President of the Mess for the event, whose role was to help move the ceremony along and reiterate the history of the battle of midway and traditions involved in the ceremony. “It was an honor to be an Army Special Forces guy at a Navy dining out with a Marine Corps General as its keynote speaker, true ‘jointness’ at its best.”

Finishing off his remarks Rocco turned to his own personal experiences during Operation Desert Storm 28 years ago and told the story of a young Marine Corps Captain named Steve “Cujo” Cusamano, a name immediately recognized by Naval Support Activity Monterey personnel in attendance.

“The Hueys were returning from a mission, and despite the terrible visibility, the section leader displayed outstanding airmanship and decisive leadership to get the much-needed section of Hueys back to home base to rearm, refit, and prep for the next mission,” said Rocco of Cusumano, now retired and serving as NSA Monterey deputy since May of this year. “Cujo could have easily have finished his first mission and waited out the storm, but he knew the tactical situation was fluid and all air support was in high demand, so he piloted his aircraft back to base ready for what was next. Decisive leadership.”