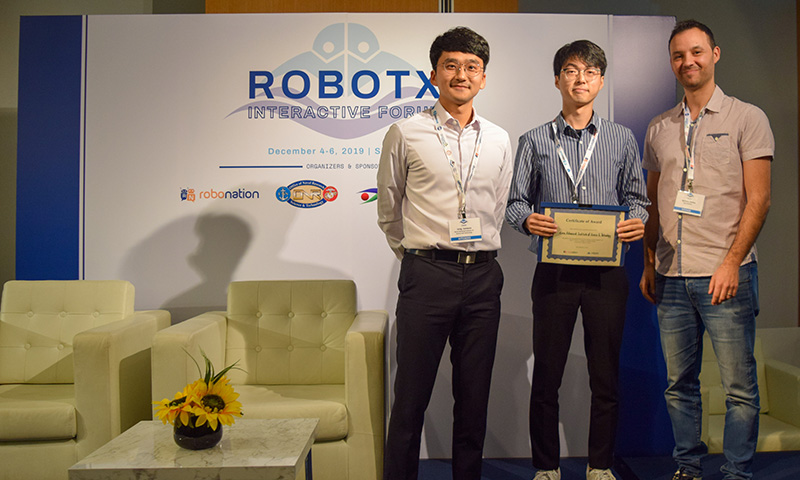 Members of the Korea Advanced Institute of Science and Technology (KAIST) robotics receive their award for achieving first place in the 2019 Virtual RobotX (VRX) Competition during the RobotX Interactive Forum held in Singapore, Dec. 6. Developed in collaboration with RoboNation, Open Robotics and NPS, the VRX enabled university-level teams to test and evaluate autonomous programs for unmanned service vehicles (USVs) in a simulated environment to further develop their USVs for future, real-world competition to be held later in 2020. KAIST took cumulative first place during the VRX in challenges such as wayfinding and docking their USVs.

Since its official launch in 2014, the biennial international RobotX challenge, a collaboration between the Office of Naval Research (ONR) and private and non-profit partners from the robotics industry, has become a premier robotics competition within academia focusing on solving challenges associated with autonomous technologies. Now that the Naval Postgraduate School is in the mix – partnering with organizations such as RoboNation, Open Robotics and Future Systems & Technology Directorate – it has teamed up to facilitate and host the first-ever Virtual RobotX (VRX) competition, an international, university-level challenge designed to broaden students’ exposure to autonomy and maritime robotic technologies.

The VRX, held in Singapore on Nov. 22 2019, provided student teams from around the globe a simulated environment to test and evaluate programs designed to control Unmanned Surface Vehicles (USV). NPS researchers from the Consortium for Robotics and Unmanned Systems for Education and Research (CRUSER) program designed and built the real-time simulated environment to both challenge the students, as well as help them further develop their programs’ autonomy as the teams prepare for the real-world RobotX challenge later this year.

“The simulated environment we created for VRX runs in real time where teams can develop and evaluate their solutions and test them anywhere in the world,” said CRUSER Director Dr. Brian Bingham. “It includes environmental effects like wind, waves, and lighting effects. The hypothesis is that having that tool will benefit all of these teams so that in 2020 when they have their next physical competition, we’ll see the level of solutions rise because these teams will have the ability to develop, test, and adapt at a more rapid and agile pace.”

In total, 17 university-level teams from the United States, Korea, Japan, China, Australia and more performed 828 simulations across 69 hours performing prescribed USV tasks such as wayfinding, navigating, and docking. The team from Korea Advanced Institute of Science and Technology (KAIST) took first place overall, and teams from Georgia Institute of Technology, the University of Sydney, National University of Singapore, and the University of Florida took second to fifth place, respectively.

“What we’re seeing for robotics in general is that a simulation is never a replacement for field experiments,” said Bingham. “But looking at what’s going on with self-driving cars and other innovative programs, simulation becomes a critical part of developing that type of autonomy. With RobotX, we’re trying to increase the overall performance of all the teams by giving them a simulation engine that they can test and evaluate to develop their software before they go into the water.”

“[VRX] was a great way to understand where robotic technology is going, and to understand what the applications for the technology are outside the U.S.,” said Bingham. “It also built relationships, especially with Singapore’s Ministry of Defense, the Temasek Defense Systems Institute (TDSI) program as well as both the National University of Singapore and Nanyang Technological University. These relationships play a key role in developing new autonomous capabilities with direct naval applications.”