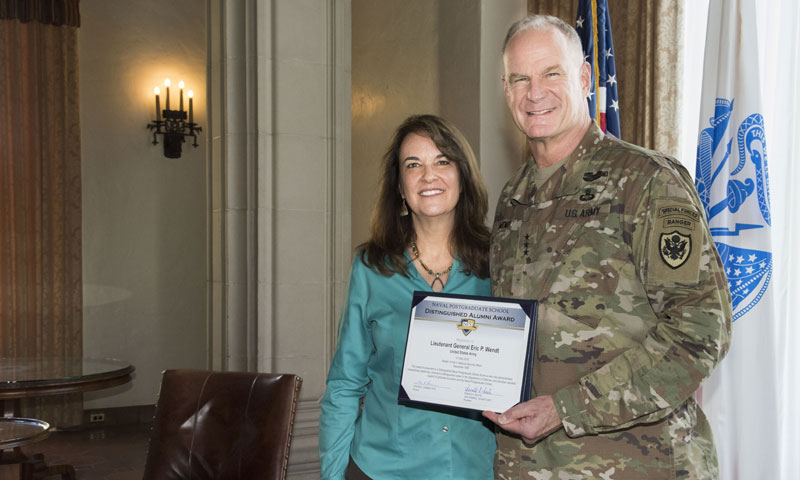 During a visit to the university campus, NPS leadership surprised Lt. Gen. Eric P. Wendt with the presentation of the Distinguished Alumnus award during a brief ceremony on the Herrmann Hall Quarterdeck, May 31. Wendt is a 1995 graduate of the special operations/low-intensity conflict program, and later returned to serve as an Army Fellow in the Department of Defense Analysis.

“As a student at NPS, I learned a lot about special operations that would later help me in forming strategies pertaining to security issues in the Philippines and in South Korea,” said Wendt. “Also, it was in 1994-1995 that I was exposed to ideas at NPS that were just surfacing in the realm of cyber warfare and the building of cyber networks. And the list of the impactful research happening at NPS just goes on and on ... I benefited greatly from my education here.”

Wendt is currently the U.S. Security Coordinator for Israel and the Palestinian Authority. His career reflects a wide range of experiences, from combat service in the field to his varied roles as commander of special operations forces in Korea, Chief of Staff at the U.S. Pacific Command, and Principal Military Assistant to the Secretary of Defense.

Wendt was especially thankful to the faculty and staff attending the ceremony, some who served as mentors and professors in the mid-90s, for the special recognition carried by the Distinguished Alumnus Award.

“It was your thoughts, your theories and your ideas in those times while I was working with Secretary of Defense Robert Gates, Panetta, Under Secretary of Defense for Policy Michelle Flournoy, including then General Jim Mattis, pushing ideas which emanated from you, and you have made an enormous difference,” said Wendt. “And as far as the students who are attending now at NPS, you have no idea how large an impact they will have and you continue to make that possible.”