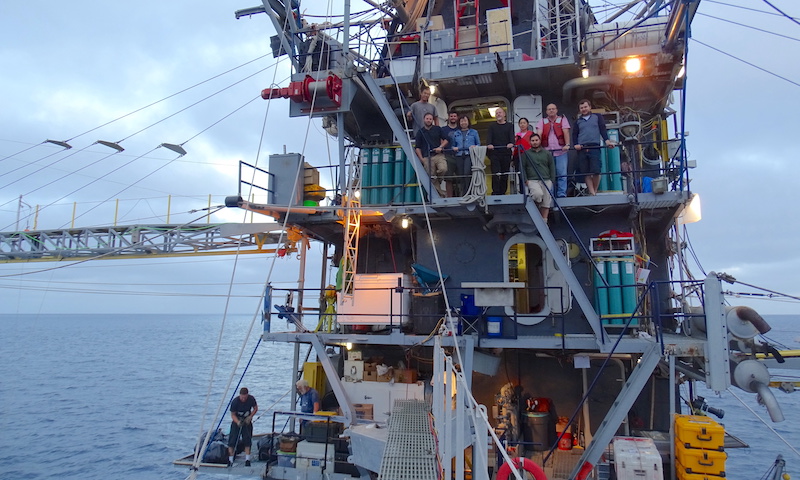 NPS Dept. of Meteorology Professor Qing Wang and her team utilized the one-of-a-kind Floating Instrument Platform (FLIP) research vessel during a past expedition in support of the Coupled Air-Sea Processes and Electromagnetic Ducting Research (CASPER) project, exploring atmospheric ducts and their potential impact on ship detection.

Oceans cover more than 70 percent of the world and finding ships at sea – especially those that do not want to be found – is still quite a challenge. Naval Postgraduate School (NPS) Department of Meteorology professor Qing Wang is on the hunt, tracking atmospheric conditions that result in what are known as “ghost signals,” where ship radar or radio communications travel and linger well beyond the line-of-sight horizon.

Back in the 1940s, the U.S. Navy recognized that under specific atmospheric conditions, electromagnetic frequencies would travel much longer distances. Understanding how and when this happens informs combat system designs and enables operational advantages for naval commanders.

“It’s a hide-and-seek game,” explains Wang. “You want to see and hear others, especially the adversaries, but you don’t want them to find you.”

Before atmospheric ducts were understood, far-reaching radio signals shocked radio specialists who were hearing “ghost voices.” Radar ducts are channels in the atmosphere that have the right temperature and water vapor conditions to bend radar waves along the curvature of the earth. Targets can be detected hundreds, even thousands of kilometers away from the radar inside these ducts. If military radar is in one of these ducts with an adversary, operators can detect each other from great distances.

“We are meteorologists,” says Wang, “so we want to be able to forecast the conditions that create radar ducts. That is the knowledge advantage that you want to have.”

To catch these ghosts, Wang has been leading a research effort that, coincidentally, is the name of a familiar and friendly ghost. CASPER, or Coupled Air-Sea Processes and Electromagnetic Ducting Research, is a collaborative effort initially funded by the Office of Naval Research (ONR) through the Multidisciplinary University Research Initiatives (MURI) Program. The grant funded six primary investigators from different universities – Ohio State University; Oregon State University, University of California, Irvine; University of Minnesota, and Notre Dame – led by Wang at NPS.

According to ONR's Marine Meteorology and Space Weather Team Lead, Dr. Daniel Eleuterio, the CASPER MURI is an excellent example of coordinated basic and applied research where the MURI program provides funding for multidisciplinary solutions to emerging or particularly complex scientific challenges.

“In this case, an outstanding team of atmospheric and air-sea interaction scientists from NPS were part of a team that included sensor developers and fluid dynamicists from Notre Dame, computational scientists from University of Minnesota, electrical engineers from The Ohio State and Oceanographers from Oregon State,” said Eleuterio. “The complex air-sea interaction in coastal zones strongly effects radio wave propagation, and affects it differently at different frequencies. The results of this research both advanced our fundamental understanding and provided the basis for very successful applied research under ONR sponsorship that will likely continue for at least the next decade.

“Dr. Wang, with her team of university colleagues and NPS students, have done terrific work and provided future leaders for the Navy and our allies a deep understanding of the fundamentals of Electromagnetic Maneuver Warfare,” Eleuterio continued.

Wang and part of her team spent a month on board the research vessel FLIP in support of her work. FLIP, now a ship emeritus, is a 355-foot vessel that would be towed to its research location in a horizontal position, then slowly rotated vertically to become a spar buoy. In the vertical position, the vessel extends 300 feet below the surface, and the extruding spar buoy can unfold three 60-foot arms.

“From the end of one arm, we had a mast going down that was fully instrumented and could take undisturbed measurements away from the buoy. And for 30 days, I was on this thing,” Wang says with a laugh. “That means for all this time I did not move. I was at one point on Earth. Every day there was a lot of stuff to do, and I didn't realize it until I was off and thought, ‘Oh, wait a minute! I was on FLIP for 30 days!’”

Wang has excitedly watched the research evolve and improve over the past several years. The data that Wang’s team collected has been used to help evaluate and improve the Navy’s operational environmental forecast models. Predicting the distance incoming targets can be detected by shipboard radar at any moment informs the timing and manner in which the Navy responds to an attack or shift in conditions.

The team’s measurements and analyses have also resulted in many publications on new discoveries of the physical processes in the lower atmosphere.

Atmospheric ducts are leaky and could also allow for naval detection of adversary radar from outside the ducts. Wang’s success with CASPER brings opportunities for new offshoot projects like the Radar and Electromagnetic Wave Ducting in the Stable Atmosphere over Water (REDSAW) project. REDSAW will build on research completed through CASPER, continuing its legacy of operational impact through fleet engagement, student involvement and research partnerships.

“This is the world of electronic warfare … Everything is in the spectrum, you just can’t ignore that,” Wang says. “And the atmosphere is always in the way. It may help, and it may deter, so we just need to know more about it because it is a perpetual presence.”

NPS fuses defense graduate education and research with student experience and faculty expertise to deliver impact and innovation. Learn more about research in the NPS Department of Meteorology.