NPS Researcher Mentors the Next Generation of Robotics Engineers

NPS Researcher Mentors the Next Generation of Robotics Engineers 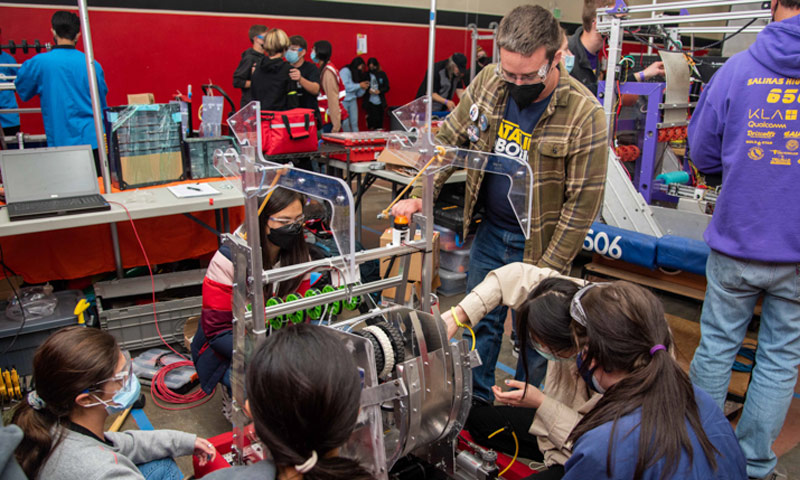 NPS Faculty Associate for Research Brandon Naylor, standing, has served as a mentor for the Santa Catalina School student robotics team for the past four years. With his help, Catalina, an all-girls boarding and day school at the high school level, was one of 30 teams competing at the regional FIRST Robotics competition at Seaside High School, March 24-26.

For six weeks, students and mentors from Santa Catalina School in Monterey meticulously crafted a robot to compete in the regional For Inspiration and Recognition of Science and Technology (FIRST) Robotics Competition, a held at Seaside High School, March 24-26.

Santa Catalina, an all-girls boarding and day school at the high school level, is a perfect example of why FIRST was created.

In 1989, entrepreneur Dean Kamen and physicist and MIT emeritus professor Woodie Flowers noted the lack of younger students – particularly female and minority students – who considered career fields in science and technology, and the FIRST program was developed to be part of the solution. Fast forward 30 years, and the latest FIRST Robotics Competition now includes 3,898 teams with more than 97,000 students and 29,000 mentors from 34 countries.

Santa Catalina initially reached out to the Naval Postgraduate School (NPS) in 2018 in search of mentors for the team they hads coined “Nuns and Bolts,” and Brandon Naylor, a faculty associate for research in the NPS Energy Academic Group, answered the call.

At that time, the team was just getting started, with just two students and a lot of passion to field a robotics team at their school.

“The team was started by a pair of ambitious students, but the school didn’t have any faculty with the right combination of availability and relevant experience to supervise and mentor the students,” Naylor said. “I had done FIRST robotics in high school, minored in robotics as an undergrad, and had a supervisor who was OK with me adjusting my schedule to accommodate meeting with the team every day after work.

“As a mentor with the team, I teach the girls everything from how to use tools to design principals to computer aided design and coding,” he continued.

Naylor has acted as a mentor for the team for almost four years now, committing time after his work day to support the students and assist the team, which is especially active during the competition season.

“Each year in January, FIRST releases a new game for the season, and my goal is to help the students bring their ideas to life in the form of a functioning robot that accomplishes the game objectives,” Naylor described. “Ultimately, I want the students to build a robot they designed themselves and to teach them skills they otherwise would not have access to.”

And according to Steve Nixon, a teacher at Santa Catalina who serves as the lead mentor for the team, Naylor’s support and instruction has been a difference-maker, allowing the team to field a competitive robot in the latest competition, and bring in new students to the team.

“Brandon’s brain has been invaluable to the team,” said Nixon. “I don’t know how we would’ve gotten as far as we have had it not been for him. He has been here since the team’s very first year and has been a crucial part of the team’s success.”

More than just a helping hand, Naylor has offered his expertise in all aspects of the robots’ build, and is able to challenge the students to create more complicated designs and helps them bring their ideas to reality.

“[Naylor] is the only dedicated building mentor that we have on the team,” said Caitlin Sullivan, a senior at Santa Catalina and the robotics team’s student leader. “He brings a lot of great ideas to the team and brings a great perspective that is typically different from ours.”

Naylor said that he loves working with the students at Catalina. Not only does it provide him with an opportunity to give back to the community, he says, but it also helps integrate a more diverse population of young students building a passion for robotics, a field that Naylor himself is pretty passionate about.

As a graduate school, the role of NPS is to support the development of knowledge and one of the best things we can do, as NPS staff and students, is to help share that knowledge with the next generation, Naylor added.

FIRST Robotics consists of hundreds of regional-level competitions where schools from across the country will come together and test their robots in a multitude of challenges, including throwing balls into goals, placing inner tubes onto racks, and hanging onto bars. Winners of the regional competition are then invited to compete at the national level, scheduled for April 20-23 in Houston, Texas.