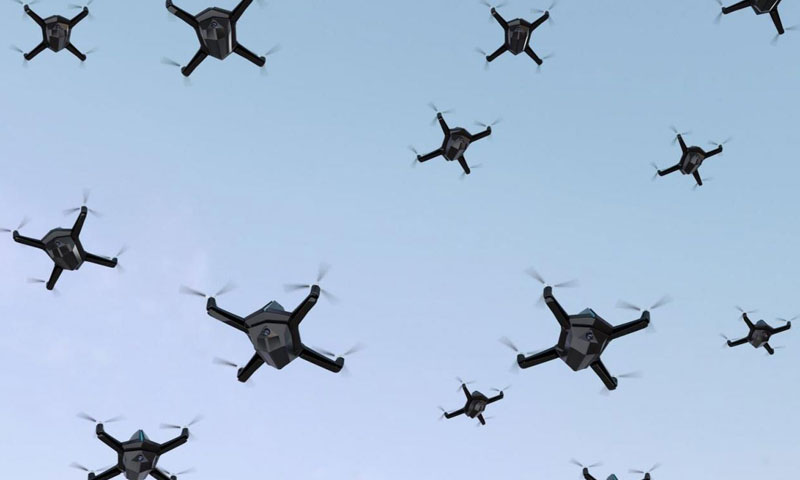 The 2018 Winter Olympics in PyeongChang, South Korea stunned the world when they put on a dazzling light show made up of a record-breaking 1,218 drones, all dancing in harmony. In the Department of Defense (DOD), though, the display reinvigorated interest in counter-swarm tactics research, for drones and swarming tactics can have applications in all warfighting domains.

Through funding provided by the DOD to the Naval Postgraduate School (NPS), Professors Isaac Kaminer and Abe Clark will lead the development of a counter-swarming analysis toolbox. The program is supported by NPS’ Consortium for Robotics and Unmanned Systems Education and Research (CRUSER), a group that responds directly to Fleet and Force research needs. This effort builds upon previous research funded by the Office of Naval Research (ONR) Science of Autonomy program. It enables Kaminer’s group to establish a multi-university, multi-year effort to develop an operational planning simulation for defense against an attacking drone swarm.

“We’re looking for mathematical representation or frameworks that we can use to model these scenarios as accurately as possible,” Kaminer explains.

Kaminer, who teaches in the Mechanical and Aerospace Engineering (MAE) Department, has dedicated the last ten years to the study of uncertain parameter optimal control, a mathematical theory that provides an analytical foundation for studying swarm-on-swarm engagements.

Clark, who teaches in the Physics Department, is newer to this project. He specializes in soft matter, which looks at how systems made up of many solid objects interact with each other (think a pile of sand where each individual grain pushes on its neighbors). To model how all these objects behave collectively, Clark and colleagues in the soft matter field use discrete-element method (DEM) simulations. In these simulations, it sometimes takes a long time for the computer to determine the interaction between every grain of sand.

Similarly, a swarm is a group of individuals that work in-sync to achieve the same goal, but it can be made up of dozens or thousands of individual agents that are interacting with each other. Most swarming tactics nowadays involve autonomous vehicles (AV) and artificial intelligence (AI), but swarming is also conducted by manned vehicles. Several countries have already developed the technology to attack through drone swarms that can be shot out of ground-based or underwater launching systems into the air. NPS’ own Advanced Robotic Systems Engineering Laboratory (ARSENL) has conducted a great deal of drone research and experimentation, including setting a record years ago for launching and flying 50 UAVs simultaneously.

Swarms can be directed by either following one leader or multiple, and the leader(s) can be physically there or virtual. And slowly, the commands are becoming more advanced and able to adapt to changes. There’s also different types of flying patterns and different weapon possibilities.

With so many variables to consider, no prediction software packages currently available can keep up because it can take a while to go through all the possible avenues for every agent to take. Kaminer and Clark have joined with several other NPS and academic colleagues – Drs. Wei Kang, Johannes Royset and Sean Kragelund at NPS; Dr. Claire Walton at the University of Texas at San Antonio (UTSA); and Dr. Qi Gong from UC Santa Cruz – to find mathematical representations of all the different scenarios.

Clark brought his expertise in making simulations faster and more efficient. Kang and Gong, who teach in the math departments of their respective universities, help provide the theoretical backbone for these algorithms. Gong designs algorithms for large-scale optimization and Kang brings his expertise in the mathematical theory of Observability, which looks at how well internal workings of a system can be determined by one’s understanding of external observations of the system’s behavior.

“You can see velocity and location and based on what you can infer where the leader is and what coordination strategy they follow,” Kang explains.

Royset, who teaches in the Operations Research (OR) Department, brings his understanding of random and deterministic optimization, or how resources can be used most effectively in cases of random or pre-programmed agents. In addition, Walton and Kragelund bring more experience and understanding of the theory of optimal control, like Kaminer.

Kragelund, a research professor in the MAE department, has years of experience building and programming the kind of autonomous machines swarms might use. He and Kaminer are involved in the NPS Center for Autonomous Vehicle Research (CAVR). Walton, who spent the last five years researching in CAVR, is now setting up an additional lab for the team to use at UTSA, which will provide a testbed for swarm experiments of hundreds of robots. Recent NPS graduate Theodoros Tsatsanifos also contributed extensively to this work through his passion and master’s thesis work.

The team will use the optimization protocols to build a “playbook” of best tactics for different kinds of scenarios. They have adapted the mathematical theory of optimal control to include uncertainty, meaning they are allowing room for the unknowns while still providing feedback to officers for decision-making.

This requires a combination of deterministic nature of algorithms that tells drones what to do and randomness, which comes from not fully knowing what the enemy drones will do. The math also must take into account the nature of attrition – agents dying – and how drones should adjust to that new reality.

“It’s really hard to know how to defend when you’re faced with a large-scale adversarial swarm attack,” Kaminer says.

But that’s where the team’s algorithms can help test the validity of current off-the-shelf simulators and inform leaders in the field of how best to address an adversarial drone strike.

Their algorithms so far are showing promise, but there’s a lot of work to be done. The team was going to hold a workshop on this topic last March, but that got shut down due to the pandemic. They hope they can hold one next March. The team has also been approached by a global venture business firm to apply algorithms already produced to real-world systems.

As demonstrated by the NPS innovation ecosystem of researchers, fleet partnerships and operationally-experienced students, this project has fully utilized the different intellectual and interdisciplinary facets of NPS to work towards a unified goal … Advancing concepts to capabilities for an increasingly complex maritime battlespace.