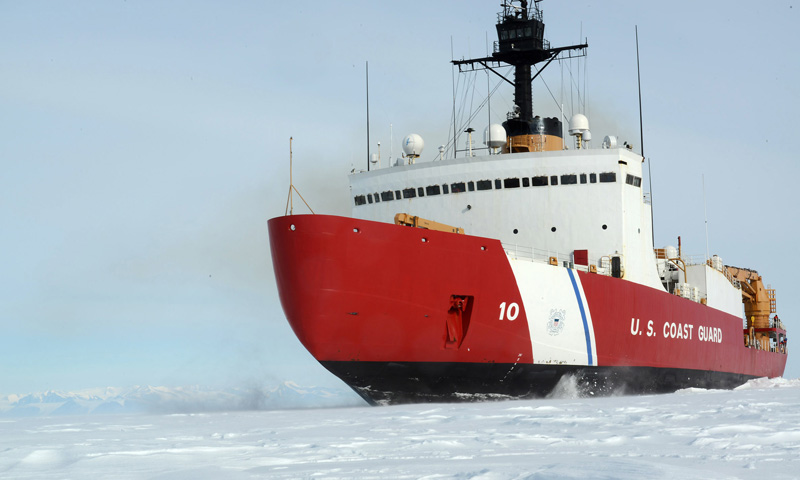 The U.S. Coast Guard (USCG) Cutter Polar Star, pictured carving through ice in this 2017 USCG image, has supported numerous field studies in the Bering Sea, which have produced data that was used to compare with numerical model output in this study, sponsored by the U.S. Department of Energy and the National Science Foundation.

The Bering Sea is the most productive ground fishery in the world, particularly for salmon, halibut and shellfish. About half of U.S.  fish and shellfish come from that area and the fishing industry is the main driver of jobs in and around the Aleutian Islands. The freezing and melting of sea ice in the area heavily impacts the primary productivity, which is the bottom of the marine food chain.

Research Associate Professor Jaclyn Kinney, Research Professor Wieslaw Maslowski, and Research Assistant Professor Younjoo Lee – all in the Naval Postgraduate School (NPS) Department of Oceanography – looked at how sea ice variability in the Bering Sea over the last several decades might impact the cold pool and marine primary production. Their research, sponsored by the U.S. Department of Energy and National Science Foundation, was published in PLOS One in April 2022.

The Arctic region has become increasingly critical to U.S. security interests, and particularly to the U.S. Navy, over the past several years. Dual purpose research in predicting sea ice, and the impact of its fluctuations, is critical for navigation and understanding how systems operate.

On top of that, less sea ice also means more tourism and commercial activity in the area, potentially, which could also result in the need for more patrols, and searches and rescues. And how sea ice impacts the food supply and local jobs could dictate the economic and cultural stability of the region. All of these factors are recognized as potential challenges in the Department of the Navy’s Strategic Blueprint for the Arctic, released in 2021, underscoring the importance for oceanography team’s detailed study.

The NPS research team looked specifically at the very cold water near the sea floor (less than 2ºC) that forms on the shelf each winter, which is called a cold pool. It’s formed by the cooling and sinking of surface water. Vertical mixing caused by salt being expelled from water as it freezes into sea ice during the autumn and winter, a process called brine rejection, increases the density of the cold pool water. This cold, salty, dense water sinks down to the bottom, forming its own marine habitat unique from other parts of the Bering Sea by the summer.

Sea ice melt is usually the first cause of water stratification during spring, but when there is not as much sea ice, stratification is mainly caused by the sun warming up surface water later in the year. Stratification is necessary for primary productivity, in the form of phytoplankton, to bloom.

“If there’s a lot of primary production in the water early, then the zooplankton are still very small and they’re not able to consume much of it,” Kinney explains. “So what happens is those phytoplankton cells will eventually settle out to the bottom, feeding the benthic community. That’s good for walruses and gray whales, which feed on the benthic community.”

But this means the pelagic community doesn’t get as much food, she says. If primary production starts later in the season, which is what happens when there’s less sea ice, it becomes a pelagic-dominated ecosystem because the zooplankton have the opportunity to get bigger. These fluctuations can heavily impact fish and shellfish populations from year to year.

Maintaining these habitat distinctions is important for maintaining the food chain for the region. Some marine species that live in the cold pool include the snow crab and Arctic cod.

Kinney fell in love with the complexity of the Bering Sea in the early 2000s, and it was actually her first region of research.

“It’s really important for food sustainability and for people’s livelihoods,” Kinney says. “I used to study invertebrates that live in the bottom sediment, and that was what I started out doing back in the early 2000s. So I’ve just always really loved that region.”

Naturally, she keeps up with the research coming out of the region. She recently came across a paper observing the cold pool shrinking northward.

“The reduction of the cold pool means that we have a whole new potential for a brand new ecosystem moving in,” Kinney explains. “If we have much warmer water, then we’re going to get these southerly fish species moving North, and that’s going to push the Arctic species even further to the north.”

How large and wide the cold pool is varies drastically from year to year, and the researchers wanted to figure out how this variability relates to sea ice variability. They used the Regional Arctic System Model (RASM), developed at NPS, to examine the variability of the cold pool’s extent and distribution to see how its size and shape is impacted by the sea ice cover. The researchers developed statistical calculations of past sea ice cover conditions in the Bering Sea from 1980 to 2018. RASM can simulate critical physical processes, feedbacks, and their impact on the Arctic climate system using several coupled models and components, including the atmosphere, ocean, sea ice, biogeochemistry, and land hydrology.

The RASM confirmed a direct correlation between the extent of sea ice and the cold pool, showing a smaller cold pool during times with less sea ice cover. In general, the researchers found that in July 2018, the cold pool was only 31 percent of what its mean was from 1980 to 2018. The researchers point to a lack of sea ice, caused by strong winds out of the south, restricting the typical southward expansion of sea ice towards the shelf break.

And as for how this impacts the food chain, the researchers found that years with low amounts of sea ice were followed by a later diatom bloom, and vice versa. These results follow the Oscillating Control Hypothesis, originally developed in 2002, which states that early ice retreat will lead to a late bloom, while late ice retreat leads to an early bloom.

Diatoms are a common type of phytoplankton that forms the base of the food chain. Diatom levels can be measured by looking at how much chlorophyll-a is found in an area, which can be done via satellite, as well as in models. A comparison of the chlorophyll-a trends in the northern Bering Sea between satellite data and RASM showed similar results, which forms the basis of another study Kinney coauthored, published in the journal Oceanography in May 2022. RASM results also provided insight into the mechanism responsible for the changes by showing the variability in nitrate concentration (a variable not measured by satellite.)

The researchers were excited to see RASM’s results mirror real-life observations. But the cold pool retreat they observed in 2018 continued to be a problem in 2019 and 2020, which also saw unusually high temperatures, resulting in less sea ice. Then 2021 saw a major snow crab population collapse, likely due to a reduction of their preferred cold pool habitat. Without the cold pool, the snow crab’s predators are able to eat juvenile crabs more easily. This population collapse bankrupted communities that rely on snow crabs to make a living. The Central Bering Sea Fisherman’s Association expects to see about a 65% drop in revenue due to necessary crab quota cuts.

“We want to know, as scientists, is this reduction of the cold pool the new normal? Are we going to see sea ice come back? And then how will the population reestablish to the south if we do see the sea ice come back to normal?” Kinney said.

She points out that this isn’t the first time the area has seen a diminished cold pool, the last one being in 2001. It did recover, with sea ice prevalence peaking in 2012. But sea ice extent has declined since then. Bering Sea sea ice is hard to predict because it starts from scratch each year, resigned to the whims of seasonal and interannual variability in addition to the larger climatic trends.

“There’s no straightforward linear relationship for ice retreating,” Maslowski explains. But the team is encouraged by how well RASM was able to predict the sea ice trends so far, and see it as a powerful tool to help the Navy glance into the future of the Bering Sea.