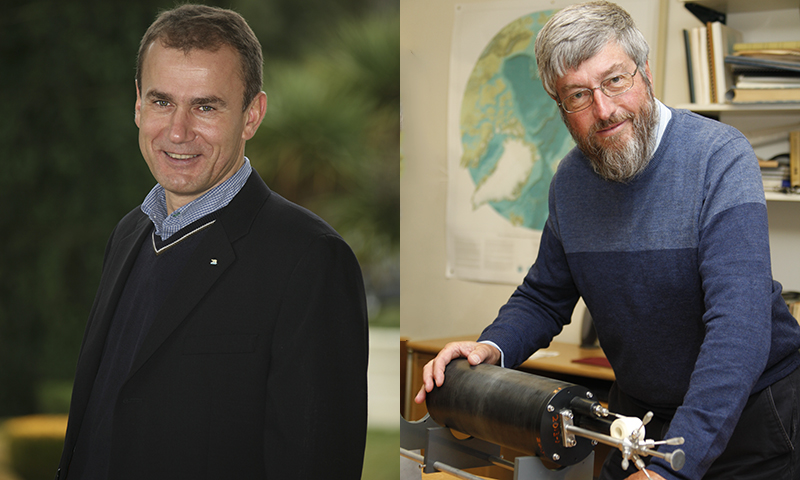 NPS Department of Oceanography faculty Drs. Wieslaw Maslowski, left, and Tim Stanton, right, are integral contributors to a landmark study poised to be the largest Central Arctic climate study ever. Maslowski serves as co-lead for the study’s modeling component, while Stanton will deploy on the first leg of the Arctic expedition.

The largest Central Arctic expedition in human history – the Multidisciplinary drifting Observatory for the Study of Arctic Climate (MOSAiC) – is scheduled to depart Norway on September 19 with two NPS professors serving in key roles in the planning and execution of the yearlong undertaking.

NPS Department of Oceanography Research Professor Emeritus Tim Stanton and Research Professor Wieslaw Maslowski join more than 600 participants from 17 countries in this historic expedition to explore, better understand and model the Arctic climate system, with Stanton set to sail on the first leg of the expedition.

Maslowski, who helped to shape the project’s science and implementation plans, also sits on its executive committee board as a co-lead for the modeling component of MOSAiC. Improved climate modeling and prediction is a focal point of the expedition, and, as Maslowski explains, “a majority of the effort within MOSAiC’s observational component is a contribution to advanced understanding and more realistic model simulation of Arctic climate for the past, present and prediction of the future.”

MOSAiC has been carefully designed to make this contribution by collecting continuous yearlong data, courtesy of an icebreaker — the Research Vessel (RV) Polarstern — as well as an assortment of observational sites established on the Arctic ice within 50 km of the vessel. The Polarstern will enter the Siberian side of the Arctic in late September of 2019, freeze into a floe of multi-year ice, and then drift with the pack ice towards the Atlantic over the course of the year.

Gathering 12 months of continuous Arctic data will help scientists address one of the biggest challenges to improving polar climate models: the lack of sufficient, yearlong observational data capable of illustrating how particular ocean and atmospheric processes and exchanges are contributing to the earth’s rapidly changing Arctic and global climate. Maslowski stresses the uniqueness and importance of this data in determining the effects of changes in the Arctic on the rest of the globe.

“An improved representation of the Arctic region in [the] global climate system will lead to a better understanding and prediction of how [the] Arctic interacts with and affects the rest of the global weather and climate,” he said.

One of the vessels that will assist the Polarstern during MOSAiC is the Akademik Federov, a deployment icebreaker set to accompany the Polarstern on the first leg of its journey (from Tromsø, Norway into the Arctic). Over the course of the 45-day journey, Stanton — one of the primary investigators (PIs) participating in MOSAiC’s overall efforts — will be onboard the Federov, teaching oceanography to 20 competitively selected early career scientists as part of MOSAiC’s exclusive educational component.

In addition to oceanography, Stanton will also be instructing the school’s participants in the preparation and deployment of the four autonomous ocean flux buoys (AOFBs) that will be deployed in support of the expedition. These AOFBs, designed and built by Stanton at NPS, will collect data that researchers will use in order to discern how changes within the upper ocean affect the sea ice. They will also measure energy from the ocean escaping through cracks in the sea ice and offer insight into how this might affect the regional atmosphere, including warming that atmosphere at an accelerated rate.

This data is key to the completion of MOSAiC’s overall mission, as Maslowski explains.

“From the beginning, this program has been designed for making observations for the very particular purpose of improving [coupled ocean-ice-atmosphere] models,” he said. “If you read the science plan, if you read the implementation plan, the whole science objective is based on what improvements in climate models are needed, and what measurements and what knowledge is missing that is necessary to improving those models.”

MOSAiC is set to offer these improvements with a complete characterization of physical and biogeochemical interactions over the seasonal cycle, including the important “shoulder seasons” — the transitions between the melt and freeze-up seasons — for  which observations are even more limited. By filling in the gaps of previously seldom measured and poorly understood Arctic processes, MOSAiC will be poised to offer a once in a lifetime opportunity to dramatically advance Arctic modeling capability. Such advancements will include both improvements of existing model representation of  the operation of the Arctic climate system (by offering unique and comprehensive observational data for model evaluation and testing of more realistic parameterizations) and the development of new, more accurate models, in which the knowledge of processes and exchanges advanced by MOSAiC’s data will be explicitly resolved.

The data gathered during MOSAiC holds the key to future process studies in a diverse array of scientific fields, and will benefit scholars working in disciplines both within and outside of climate studies. As the nation and the Department of Defense continue to assess and plan for a wide range of impacts and risks of climate change, Maslowski and Stanton’s work with the project puts NPS, and its students and faculty, at the forefront of this effort.