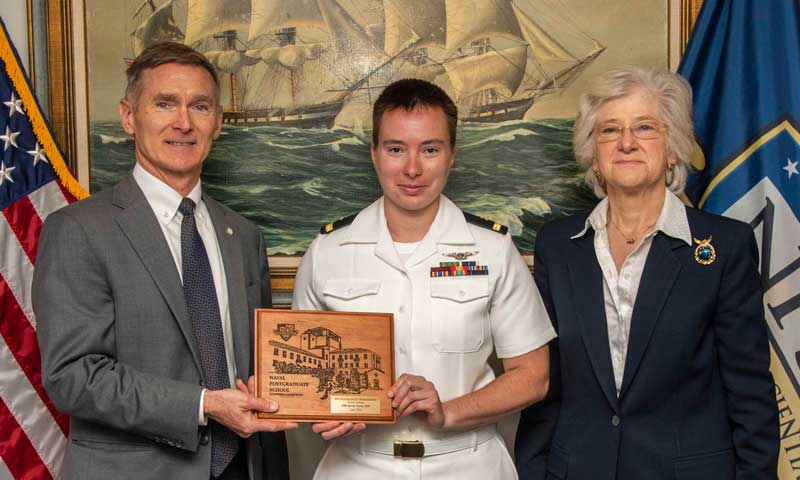 Clark derived her essay from the thesis she is currently working on for her master’s degree, which she is slated to receive at NPS’ upcoming Spring Quarter graduation on June 17. According to Clark, she chose to write about Naval aviation identity and culture because she wanted a topic that combined her future as a pilot and her interests of airplanes and psychology.

“The Navy, like many organizations, has a historical trend of downplaying the psychological impact of technological transitions, which negatively impacts the service’s effectiveness,” stated Clark. “The purpose of my thesis is to emphasize that the psychological identity of Naval aviators must undergo changes concurrently with the changes in aviation technology, such as the development of uncrewed aircraft. My essay identifies some of the identity and cultural factors impacted by uncrewed aircraft and aims to help Naval aviation leadership minimize pilot resistance to newer uncrewed aircraft and their respective pilots to successfully integrate unmanned platforms into the Naval aviator identity.”

Clark credits her class officer during her time at the Naval Science Institute in Newport, Rhode Island, as the initial spark for the idea of submitting an essay in one of the USNI essay contests. She also hopes that this contest will help her thesis to reach more people than those who may find it in Calhoun, NPS’ digital repository for research materials and institutional publications created by the NPS community.

Clark recalled being in NPS’ Dudley Knox Library one evening when she received the e-mail saying she had been selected as the winner.

“I was surprised, excited and nervous,” said Clark. “I immediately jumped up and ran to the other side of the room to my friend and shared the news, still jumping. I couldn’t believe I had won.

“I’m happy and honored to be included with the distinguished few who have won the award in previous years,” she continued.

Clark emphasized how glad she was that she decided to add to her already full school workload and submit her work to the competition. Even if she had not been selected, she says, it still would have been worth it.

“The topics and events discussed in this essay will impact my career for as long as I am in the Navy,” Clark said. “The world of warfighting is constantly changing, and we need to be ready for all of the changes new technologies bring.”

The NPS Foundation/USNI Annual Essay Contest is jointly co-sponsored by the NPS Foundation and USNI to encourage writing for publication and critical thinking among NPS students, faculty and staff.