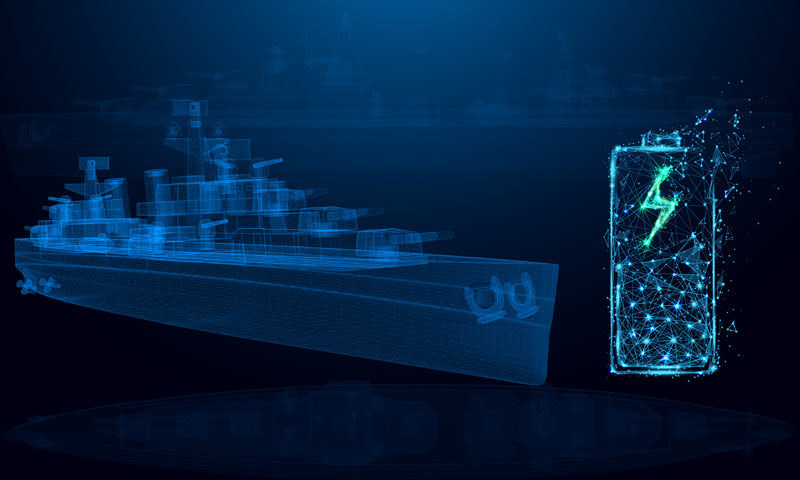 “We found a lot of research and were very interested in the progress that had been made by lithium-ion batteries, as well as how much investment in both the public and private sector was going into it,” Masters explains. “We were both kind of skeptical about the application of and the actual savings that lithium-ion batteries can provide. And so we just wanted to look into it and see if, on a long-time scale or large project, is there potential for cost savings?”

The student team’s capstone project was funded in part by a Naval Research Program (NRP) grant secured in Oct. 2021 to explore net-zero pathways for the operational Navy. At the end of the project, they presented their work in a virtual brief, which was attended by many experts at NPS as well as outside interests, including the senior climate advisor for the Navy. There will be three additional projects briefed through the grant over the 2022 Academic Year.

“There’s been a lot of interest in the Pathways to Net Zero Emissions because of the push within the DOD and other federal agencies to reach net-zero by 2050,” says Kristen Fletcher, a Faculty Associate for Research in the Energy Academic Group (EAG) at NPS. Fletcher was one of the students’ advisors, along with Dr. Simona Tick, an NPS manpower and economics lecturer in the Department of Defense Management.

The students conducted a cost-benefit analysis on converting a gas-powered warship to be powered using a Li-ion battery system, eventually developing a working financial model that can be used to calculate the carbon emissions of the service fleet using gas turbine as well as the battery alternative over the span of 15 years.

The costs they look at included the energy needs of the warship to run for a year, the cost of the battery and the conversion process, the cost of fuel prior to conversion, the social cost of emissions, and the difference in maintenance costs between gas and Li-ion powered ships. Emissions are relatively straight forward for a gas-powered warship, but they also calculated the emissions associated with using U.S. domestic energy, which is not all from renewables.

They used the U.S. Energy Information Administration’s conversion rates to determine the energy use in gas-powered ships versus Li-ion battery powered ones. The team also looked at three different oil price scenarios based on market volatility.

Under the methodology employed by the student team, the results demonstrated significant savings in manpower. Specifically, they found that Li-ion batteries required no mechanics and nearly half as many electricians. This alone could save the Navy over $435 million a year fully realized.

Recognizing the battery systems would require replacement after in the 8th year of operation, the team also factored in potential cost savings through the resale of recyclable materials. And they estimated the cost of switching out batteries to be about half the cost of the initial conversion from a gas-powered turbine to electric power.

According to the team’s estimates, the Navy would spend between $138 million and $256 million to switch a gas-powered warship to run on a Li-ion battery. Juxtaposed with the potential estimated savings of anywhere between $38 million to $156 million, per year, by making the switch and the team says their results speak volumes.

“Even in the most limiting scenario, which is the low oil price scenario, still 62 precent of the time it came out that [the Li-ion switch] was preferred, which to us suggests it does present significant cost savings to the government, at least from a strictly financial standpoint,” Masters said during the team’s final briefing.

Most of the savings comes from the reduction of energy needs, the team reported, but they did also look at other gas-powered turbine options that might increase a warship’s cost-savings or energy efficiency without the wholesale switch to electrification.

It’s an area of potential further research, as is the maintainability, reliability and survivability of Li-ion batteries, the students said. There are also possible hybrid energy solutions, and the maritime applications of Li-ion batteries in coastal waters and within smaller crafts, as additional areas of research.

All three students have graduated, and are now in follow on assignments, or preparing for them. Masters is attending a submarine officer advanced course in preparation for going back out to sea, Haque is working on the budget for Marine Corps medical care, and Bloxham started at the Presidential Helo Program (PMA 274) as a deputy business financial manager.

The team says their capstone experience has definitely changed their perspective to the value in pursuing renewable energy solutions.

“I hope I have the opportunity to influence DOD decision-makers on making more investments in green energy,” Haque says. “Every opportunity I get, I will try to advocate for that.”