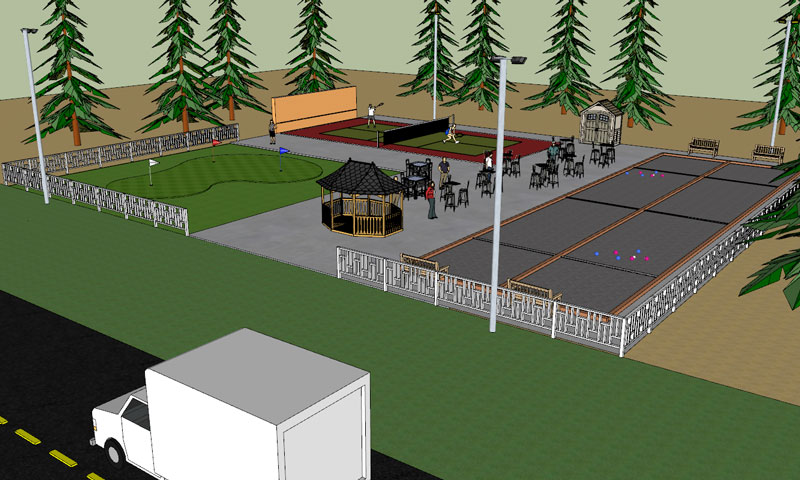 A multi-use facilty is set to open this spring with the addition of a bocce ball-pickle ball-putting green complex at NSA Monterey (NSAM) in a spot formerly occupying the tennis courts in driving up to the front of the Herrmann Hall.

“The tennis courts were in desperate need of repair and there were already two courts located near the gym so the two courts up top were rarely used,” said Capt. Rich Wiley, Commanding Officer, NSA Monterey, who enjoys playing bocce ball having grown up playing the game with friends throughout Monterey County. “We surveyed the area and what properties we could use that would be respectful of the historic Hotel Del Monte and its tradition.

“Bocce-ball, a putting green and a pickle-ball court were ideas our visitors recommended and we are looking forward to this enhancement, and hope everyone visiting the base and staying at the Del Monte will be able to enjoy it, he continued"

According to the United States Bocce Federation, “everyone” can play bocce ball.  It is played all over the world and is part of the International Special Olympics and the Senior Olympics. Pickle ball is another all-hand’s game, and is a simple paddle game played using a special perforated, slow-moving ball over a tennis-type net on a badminton-sized court. A golf putting green will round out the three-game complex, along with barbecue grills, tables and chairs.

“When the thinkers and visionaries on the command staff came to Public Works with their idea, we were happy to support it. The result will be a very nice complex for students, staff and visitors to barbecue, have mixers and to play popular sports like pickle ball,” said Lt. Cmdr. Paul Weyant, Public Works Officer, NSA Monterey.