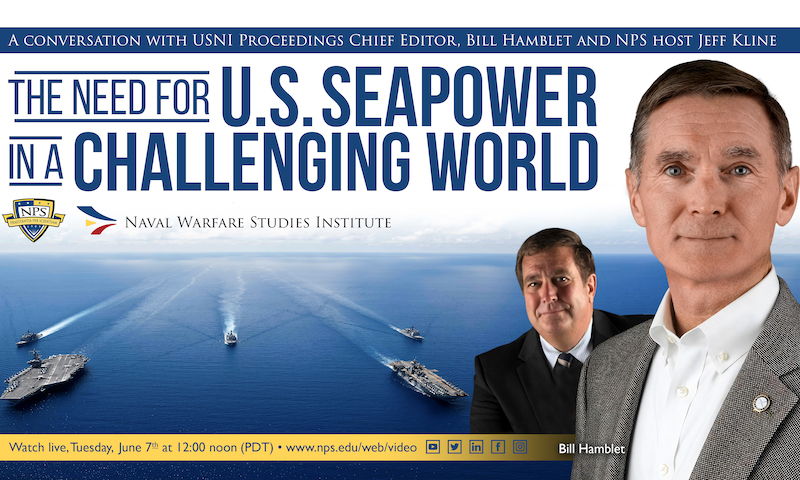 Bill Hamblet, the executive vice president for periodicals and membership at the U.S. Naval Institute (USNI) and editor-in-chief of USNI’s magazine Proceedings, visited the Naval Postgraduate School (NPS) on June 7 to participate in a panel discussion titled, “The Need for U.S. Seapower in a Challenging World.”

The presentation, held in NPS’ Glasgow Hall and broadcast live online, was part of the Naval Warfare Studies Institute’s (NWSI) Seapower Conversations series, and was moderated by retired Navy Capt. Jeff Kline, a professor of practice in the Operations Research department and director of NWSI, as well as Dr. Jim Wirtz, a professor in the National Security Affairs department.

Proceedings is a monthly publication that features a variety of content. Known as “the independent forum of the sea services,” Proceedings is a compilation of articles, essays and discussion forums that offer the fleet a chance to be heard. USNI recently published a series of articles under the name of “The American Seapower Project” which focused on communicating the importance of naval power to a maritime nation and the current state of the U.S. naval services.

“The world has changed significantly in the past few years,” said Hamblet. “The threats to global maritime security along with the rise of great power competition required us to design a project to reframe the thinking of seapower and its importance to the American people.”

The American Seapower Project was originally started in January 2021 with the hopes to “inform strategy, planning, and procurement within the Sea Services and the government and build public support for the continued role of maritime power for the United States.” Hamblet believes that the project has done just that.

Not only has USNI published a series of articles about the project, but it has also attended multiple panels at various conferences in hopes of spreading awareness for the cause, Hamblet noted.

“It needs to be a conversation with the American public,” he stressed. “Our leaders and the general public need to understand the importance of maritime security and how directly it affects us every day.”

Kline and Wirtz, along with NPS professor James Russell, were contributors to an article that was published by the Foreign Policy Research Institute earlier this year discussed the rise and fall of historically great naval powers.

“Today we have a rising Chinese competitor, technological advances in anti-access, area denial technology as well as long-range ballistic missiles that essentially change the way the Navy operates,” said Wirtz. “It creates a real problem in terms of American foreign and defense policies where we are no longer free to sail across the Indo-Pacific without putting ourselves at risk.”

“Today, we have a dual cycle of rising competitors combined with emerging technology,” added Kline. “Right now, we are in a position where our primacy is being challenged by both.”

While at NPS, Hamblet was able to visit multiple facilities and speak with faculty and students. He also presented an award to NPS student, U.S. Navy Ensign Sarah Clark, who recently won an essay contest co-sponsored by USNI. Clark’s essay explored the cultural challenge associated with the transition from crewed to uncrewed aircraft.

Watch the full presentation on the NPS YouTube Channel, and visit the Seapower Conversations website for more information on the program and to watch past lectures.