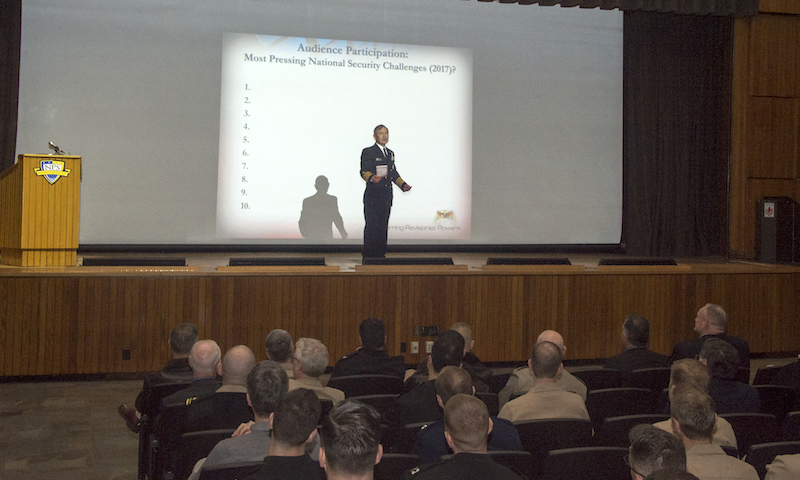 Commander, U.S. Pacific Command Adm. Harry Harris Jr. offers the latest NPS Secretary of the Navy Guest Lecture in King Auditorium, March 2. Harris discussed the importance of the Indo-Asia-Pacific region, and its interconnected relationship with the prosperity and security of the United States.

For the first time since 2014, the Naval Postgraduate School (NPS) welcomed Adm. Harry B. Harris Jr., now Commander, U.S. Pacific Command, to discuss his views and perspectives with NPS students, faculty and staff during a Secretary of the Navy Guest Lecture (SGL) in King Auditorium, March 2. During his 75-minute presentation, Harris focused on the importance of the Indo-Asia-Pacific region, which he said is “inextricably linked to America’s future prosperity and security.”

“Why does the Indo-Asia Pacific matter to the United States? Why should I care about those islands that China is building, and what is it about this region that I should care about?” asked Harris in opening his discussion.

“The reason that this region is so important to America is because, by 2050, more people will live in this region than in the entire world today,” said Harris. “Imagine the pressures of population density on security, food, resources, water, pollution and imagine the engine of innovation in an area that dense.”??

Of the 10 largest cities in the world today, eight are currently located within this region, Harris noted, as does more than half of the global GDP.

“A big change in the region the last few years is the degree to which the rules-based international order – or what I like to call the Global Operating System – is being challenged by revisionist powers,” Harris said. “In place since the end of World War II, this system has advanced peace and prosperity. It’s underpinned by American military presence and our network of allies and partners. The United States only has five bilateral defense treaties [Australia, Japan, Republic of Korea, Republic of the Philippines and Thailand] and all five are in the Indo-Asia-Pacific.”

Harris then turned his attention to a critical component of the PACOM mission, deterrence. With an audience of graduate students, many of whom are wrestling with complex formulas on a daily basis, Harris offered his own equation, “Capability x Resolve x Signaling = Deterrence.”

“This is multiplication,” he stressed, “So if any of these components is zero, you get no deterrence.

He also made a point to highlight how many of the world’s most pressing challenges remain the same over time. Harris polled the audience for the 10 most significant global challenges of the day and he received such issues as economy and budget, climate change, nuclear proliferation, resource management and others. He then displayed a similar top ten list from a 1976 briefing which listed many of the exact same issues. ??

“Back in 1976, the deputy director of the [Defense Intelligence Agency] DIA presented a list to the President which represented his top 10. As you can see there are many similarities with the challenges you just provided,” Harris said. “I submit to you today in 2017, based on what you told me, that the challenges remain … But, the threats have expanded which makes it a very challenging security environment,” said Harris.

Before taking questions from the student audience, Harris offered a few possible avenues for maximizing the opportunity within each component of his equation, and noted that those in the audience are an important part of the solution.

“A lot of the work that you are doing here at NPS is helping America maintain our credible combat power,” said Harris.

Harris graduated from the U.S. Naval Academy in 1978 and was designated as a Naval Flight Officer (NFO) shortly after. He is the Navy’s current “Gray Owl,” holding the NFO designation for the longest period of time, and the service’s “Old Goat,” the longest serving Naval Academy graduate still on active duty.?

NPS’ Secretary of the Navy Guest Lecture program provides a series of professional lectures by senior leaders throughout defense, government, industry and academia designed to help the university’s students and faculty link their studies, teaching and research efforts to the defense needs of the nation.