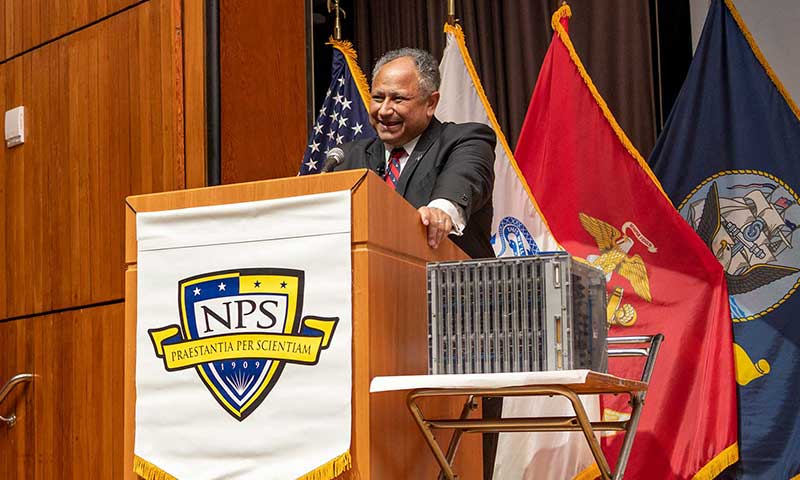 Secretary of the Navy Carlos Del Toro speaks to NPS students, faculty and staff during a Secretary of the Navy Guest Lecture (SGL) about lifelong learning, Aug. 18. On display is Secretary Del Toro’s NPS thesis project from 1989, which explored the utilization of bubble memory to capture satellite telemetry data.

An alumnus of NPS, Del Toro earned a master’s degree in Space Systems Engineering from NPS during his 22-year career as a Naval officer. He talked at length about the importance of continuing education and how it keeps the United States on the cutting edge of warfighting. He also emphasized the Navy’s commitment to investing in and sustaining the future of NPS and other Department of Navy education programs and institutions.

Del Toro began his lecture at King Hall by underscoring the importance of lifelong learning, and how important it is not just to NPS students or the DOD, but to the United States as a whole.

“We cannot afford to be complacent or assume that we will always have a technological edge on our adversaries,” he said. “Our commitment to lifelong learning is how we stay ahead of the curve.”

He continued: “The knowledge I gained during my time at NPS was foundational, and it was knowledge I continued to build upon over the course of my career. While technology has changed dramatically since then, the core concepts have remained the same. Yet that dynamic is precisely why lifelong learning is critical to the strength of the Navy-Marine Corps team.”

Del Toro also talked about how the Department of the Navy intends to continue its investment in lifelong learning at NPS.

“Our most senior leadership, from the Commander-in-Chief to the Secretary of Defense and, of course, the entire Department of the Navy, understands that advanced training is not free,” he said. “NPS provides us all an extraordinary return on investment. Yet we can only reap maximum returns if we make the necessary investments, and I am committed to that cause.”

In closing, Del Toro spoke about the responsibility of the students to not only commit themselves to become lifelong learners, but to pass on that value to those junior officers and enlisted personnel who look up to them.

“As a group, you can do more to foster lifelong education as core value than I could with a thousand memos and speeches,” he added. “Every time you demonstrate how your advanced degree better equipped you to accomplish your mission, you advance our culture. Every time you lead, you create the culture we need. You control whether our people remain a competitive advantage. You control whether our maritime dominance will continue into the next decade and beyond.”

“As you complete your degrees and move on to your next assignments, you will have a host of urgent demands upon your time and expertise. Nevertheless, it is critical you make time to lead and mentor. That is your responsibility to the next generation. You control the future of the U.S. Navy’s culture.”

During his visit to NPS, Del Toro presented the Navy Distinguished Civilian Service Award to his thesis advisor, mentor and teacher, Professor Emeritus Rudolf Panholzer of the Space Systems Academic Group (SSAG). Panholzer began teaching at NPS in 1964 and was a member of the faculty for all but two years until his formal retirement in 2016. Panholzer served as chair of SSAG from 1987 to 2016, as well as Dean of Engineering and Applied Sciences during the 1990s.

“We are grateful to have an accomplished NPS alumnus like Secretary Del Toro return to our campus to share his vision and insights about the role of education as a strategic imperative for the Department of the Navy,” said Rondeau. “Most importantly, Secretary Del Toro understands the importance of continuing education as a critical warfighting enabler, and he is working hard to increase investment in Naval education at all levels.”

Watch the full lecture on the NPS YouTube channel.