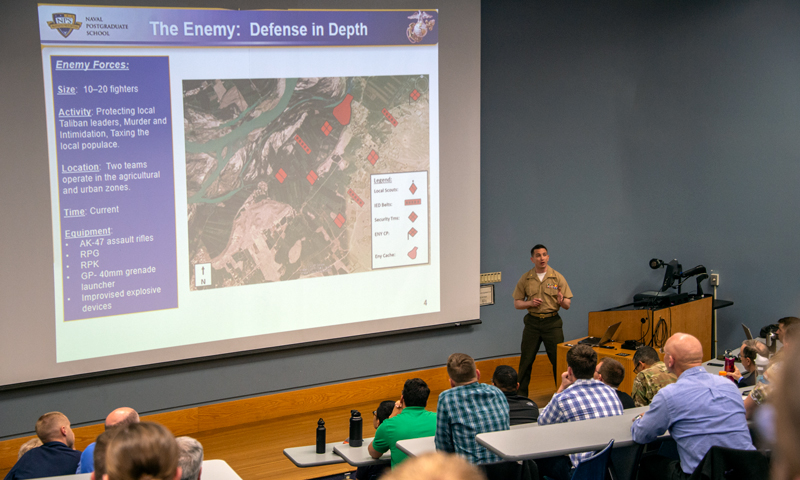 Four U.S. Marine Corps students set to graduate from NPS’ Department of Operations Research (OR) presented their theses to a panel of judges, along with professors and fellow students, during the Military Operations Research Society (MORS) Stephen A. Tisdale Graduate Research Award competition in Glasgow Hall, May 31.

“The MORS/Tisdale Thesis award recognizes a graduating student in the [Operations Research] Department for outstanding thesis research that has near-term impact on the security of the U.S. and its allies,” said U.S. Navy Capt. Brian Morgan, Graduate School of Operational and Information Sciences (GSOIS) Program Officer.

Majs. Nathan Gulosh and Nicholas Freeman, along with Capts. Matthew Danielson and Anthony Vanderzee, each presented his thesis before taking questions from the audience. In the end, Freeman and his thesis, “Improving the Force Generation Process for Marine Corps Infantry Battalions,” was given top honors and named the recipient of the MORS/Tisdale award.

“I’m encouraged by the committee’s appreciation for research into how the Marine Corps might optimize its Force Synchronization decisions,” said Freeman. “Now I need to take that encouragement and keep up my energy for the next step, which is bringing this research to the Marine leaders who actually make all the hard decisions I’m trying to help with.

“Of course, there’s no problem that doesn’t become more complicated the closer you look at it, so I’m hoping for opportunities to learn a lot more from actual practitioners,” he continued. “I also look forward to seeing other Marine OR students – currently there are two who are interested in continuing this research – really push the models forward in terms of computational improvements and interesting policy analysis.”

The MORS/Tisdale award is named in honor of Lt. Cmdr. Stephen A. Tisdale, a dual-degree graduate of NPS in 1989 who perished in a military aircraft accident on March 21, 1991, while serving with Patrol Squadron 50 off the coast of California. Tisdale’s outstanding and influential thesis, “Assessing Optimal Utilization of Potential Anti-Satellite Architectures,” won the MORS prize for his graduating class, and was also recognized as the top Space Systems Operations student as well.